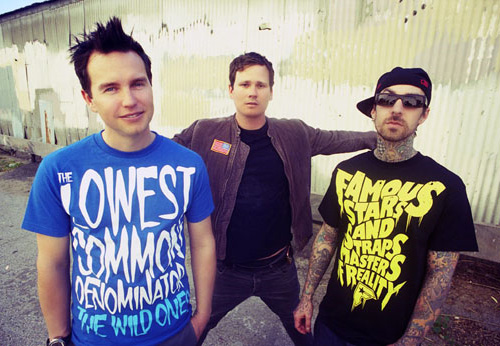 And if we can have another day,
I’ve got so much left to say,
I’d tell you everything.

Everyone has a favorite band or musical artist. The human connection to music begins early in life and continually evolves as the years go by. And while musical tastes may ebb and flow, most individuals with a pulse and a heartbeat in this world latch on to a group or act that stays with them, even through all of the changes. For me, it’s Blink-182. Attending their performances during my high school years was a summer rite of passage, and every time I hear their music, I’m immediately transported back to a time when I was young and carefree and without major responsibility. It’s liberating and meaningful. Perhaps, though, the most beautiful piece of the puzzle is that even though other people may claim Blink-182 as their favorite band, none will have the exact same visceral reaction as I do when the opening chords of “Dammit” or ” Carousel” begin playing. My soundtrack may have the same songs as yours, but the meaning is entirely different.

I’ll never forget when Blink-182 announced they were breaking up in 2005. I didn’t get angry or cry or punch anything. I wasn’t as devastated as some of those young teenage girls were when The Beatles split up. In fact, I was completely the opposite. Sure, deep down it definitely sucked, but in my mind it was nothing more than the confirmation of a simple life truth: nothing lasts forever, no matter how good it is.

Petrella drew the short straw six months ago when he wrote the post that let all of you know the doors to TPL were being closed. His voice was the last to be heard, and his message was one that both myself and Disch stood behind. But there’s more to the story of what led to the decision to hang it up, and it’s only fair that you have that context. To put it very bluntly, I’m not sure any of us were happy doing what we were doing. When we launched the new site and brought the three of us together for the first time, the project was focused on our unique voices and opinions, and we prided ourselves on doing things our way and not giving a damn about the repercussions. It was raw and fun and distinctly our own. And while the finished product that you saw on the site may have never wavered too far from that manifesto, the sad fact is that the process to getting the content out there did.

Petrella, Disch and I had many long talks in the run-up to the December closure of the site, and it became apparent to each of us that the magic wasn’t there anymore. Sure, we loved engaging with all of you, but the grind of pulling together pre-games, doing wrap-ups and working on longer-form content was taking a major toll on us. Combined with the personal demands of jobs, families, hobbies, etc., the closure of the site was a foregone conclusion. It was just a matter of timing, and frankly, I’m surprised we held out as long as we did.

As the summer ended and the lockout took over, so did the realization that the time was right to hang it up. The three of us hopped on an e-mail thread, made our cases, and took a simple vote. The tally was unanimous and the results were executed quickly: the site closed and we all moved on to different things. To be clear, none of this was a result of infighting or broken friendships. The three of us have always remained good friends, but there was a point where I didn’t have a meaningful conversation with either of my partners for the better part of three months. Nobody was mad at each other. Nobody disliked any of the others. Quite simply, the passion behind the site was gone and – to some extent – we had all already gone our own different ways and moved on to new things. It was sad, but it was also necessary.

After Blink-182 split and everyone went into their own side projects, the band didn’t actually speak as a group for over three years. Travis Barker – drummer – spent time working with the now deceased DJ AM, and they happened to be on a plane together in September of 2008. The plane ended up crashing during landing, and killed all aboard, except for Barker and DJ AM. As Barker was in the hospital recovering from trauma and severe burns, his band mates found themselves supporting him by his bed – and at the same time speaking to each other for the first time in three years. Shortly thereafter, the guys made their way to the stage of the 2009 Grammy Awards. As they prepared to hand out the award for Best Rock Album, Barker walked up to the microphone and issued a very subdued, yet powerful statement:

For those who had followed Blink-182 for any length of time, there was plenty to be excited about. But there was also an understanding. These guys had gone and spent three years on different projects with other musicians, and their sounds and talents had changed because of it. So despite the same cast of characters under the familiar banner, there was bound to be some changes in the sound, delivery and content. Honestly though, I could have cared less. I just wanted three dudes that made the music of my youth to get back together and make some more tunes. In fact, it wasn’t really ever about the music. It was a victory for the belief that problems can be solved and passion can be found, even when the situation says that the odds are fully against it. Some call it fate. Others call it romanticism. I just turn up the volume on another song and lose myself in a sea of memories.

It’s a decision that hasn’t been made lightly. Over the past few months, we’ve revisited the issue a number of times, and there’s been more than one discussion that’s ended with us deciding not to come back. But the more we talked and the more we thought things over, we realized that TPL is an important part of our lives and something we weren’t ready to give up. However, we also reached an understanding that the previous model was flawed and something we wouldn’t allow ourselves to fall back into. Changes had to be made and a common goal had to be in sight at all times. That goal is simple: Be raw, be fun and be distinctly TPL.

So what does it all mean? It means that each of us understands that TPL is just a piece of the larger personal puzzle. Petrella will continue his coaching duties, Disch will continue to bike and blog, and I’ll continue my photo project. Jobs, hobbies and responsibilities won’t come at the expense of banging out a post on TPL. Life will be prioritized properly. Think of it as our own internal “optional skate.”

It also means that you’ll see a big change in terms of content on the site. Gone are the pre-game posts and post-game wrap-ups. There’s plenty of great Red Wings sites on the right sidebar that already handle those areas, and as the biggest time suck for the three of us, they were the first to go. As for TP:60, no official decisions have been made, but I think it’s safe to assume that the podcast is also going by the wayside.

Things that won’t change? Petrella’s insane roster analysis and prospect coverage, Disch’s whiskey-laden stories that eventually tie in hockey and blow your mind, and my verbose and lengthy long-form postulations. And while that specific content won’t change, the regularity of our writing will. There will be weeks where content pops up frequently. There will also be weeks where nothing goes up on the site. We’re completely OK with that. It’s part of the deal we made with each other and we believe it will make the resulting product even better. We’ve also realized that much of the instant reaction and analysis we turned into posts in the past can be delivered through the @TPLhockey Twitter account. Petrella has done a fantastic job utilizing the account over the past few months, and we’ll continue to make that a priority moving forward.

As for the rest of it, we haven’t really decided. I’m sure there will be new shirts in the store from time to time, the charity angle is likely to stick around, The Pipeline is something we are still interested in and the ever popular Loss Candy still seems like an attainable goal. We’ll meet as a group over the coming weeks and figure out what makes sense, but for now, we’re just happy to have the site back online and content in the hopper.

Finally, we owe all of you a huge thank you. Most of you have been frequent visitors over the past couple of years, and the amount of supportive e-mails and tweets we’ve received during the last six months has been mind-blowing. If it wasn’t for your support and enthusiasm about our product, TPL would still be padlocked tighter than Fort Knox.

It’s been a long road back and there’s still plenty of hurdles to overcome. But the first and most important step is complete and TPL is open for business yet again.

It’s good to be back.