About Last Night: The Finland Chronicles 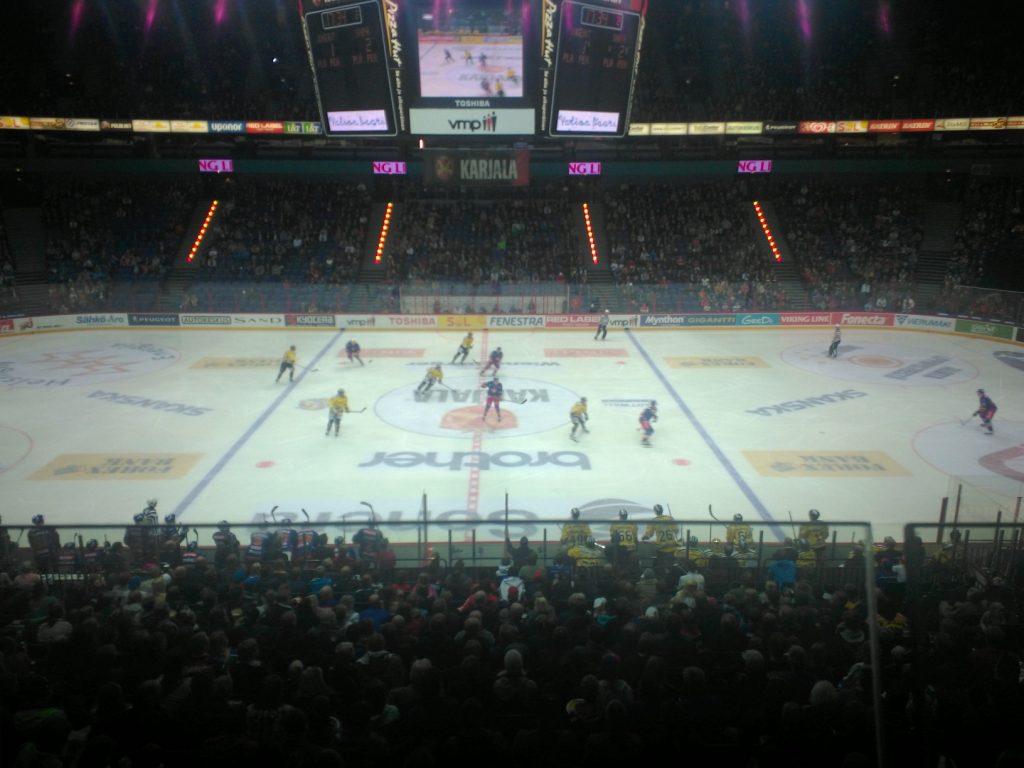 Advertising in Finland: Not subtle.

As previously noted, TPL headed over to Helsinki, Finland to take in a SM-liiga game between Jokerit and Saipa. Here are my raw, unedited and completely pointless ramblings from an evening of Finnish hockey…

20:00 – We’ve made it.  Not quite a full house, but both end zones are boisterous and chanting. Jokerit clearly with the larger group of spectators, but the Saipa faithful (all 20 of them) are rather loud. No surprise, given the amount of beers I see in hands.

20:00 – Quick observation on Finnish culture: They really love American music. Everywhere I’ve been this week has featured a crazy mash-up of American rock and late 90’s R&B. This game is no different.

20:00 – A moment of silence is in order for the NHL and the Red Wings, as Jokerit starts a line of Filppula-Filppula-Pulkkinen.

19:59 – I’ve begun counting the ads on the ice. I assume this will wrap-up sometime during the inevitable shootout. Current count: 8

14:51 – Jokerit strikes first with their “Past-present-future” line of Wings. It’s a power play tally from Larry Flip, off a beauty of a pass from crowd favorite Valtteri Filppula. Teemu Pulkkinen just skated around and looked good. We’ll take it.

9:37 – Saipa ties it up 1-1 with a cheap one at the end of the power play. Not a lot of physical displacement in front of the net. Kind of like watching Brad Stuart on the PK last year.

7:28 – 2-1 Saipa. Another power play goal. By my count, the two teams combined are now 3-3 on the power play. With the amount of penalties called so far, the final result may be something reminiscent of a football score.

3:22 – Jokerit fans unhappy with a non-call on a mugging of Valtteri Filppula. Really hoping someone starts throwing flares on the ice. Or toilet paper. They do that here, right?

1:49 – Penalty on Saipa. The power play streak is on the line. The brothers Filppula on the ice to keep it going and Valtteri hits the post.

0:00 – That’s it for the first. Saipa – clearly outplayed – heads to the locker room with the lead. 10 seconds left on the Jokerit power play to keep the power play perfection alive.

20:00 – Period two about to get underway. I’ve now devoured traditional Finnish beef, some sort of potato pancake, a salad and some blueberry pie. On to Karjala – a Finnish beer – for the rest of the game. Look out – they have the coveted (I assume) center ice advertising spot, so I assume this is the best beer Finland has to offer.

16:21 – So apparently, the leading scorer for each team wears a gold helmet. We just had a faceoff between both “goldies”, which seems rare. It’s the magic of TPL, I’m convinced. Unless this is a regular occurrence. In that case, whatever.

15:58 – Both power plays employ the same technique: setting up to the left of the net and looking for the backdoor pass. Given the success rate tonight, perhaps the Wings should look into this. It’s a lot more entertaining than watching bomb after bomb from the point.

11:05 – Beginning to wonder if we will see an even strength goal tonight…

9:13 – Val with two beautiful rushes, but fails to shoot both times.  #Thingswesaidin2010.

8:06 – Mikael Samuelsson sighting. Not really. Although the blast from  #21 looked eerily similar as it sailed 20 rows deep.

6:44 – Jokerit back on the power play and a much better effort from Val. Looks like he’s settling in…

6:42 – And then he promptly air mails a pass to center ice from behind the net.

2:49 – Nice steal by Val, actually. That said, he’s not really skating too hard out there, and his shifts are short. Looks winded. Too much summer fin with Jiri Hudler I assume.

0:36 – There’s a guy with a bullhorn leading the cheers for Jokerit. Holy shit do we need this in the NHL.

14:40 – Jokerit just finished up an impressive looking power play with both Teravainen and Pulkkinen on the ice. Couple of nice passes and chances for both. Then, without fail, Pulkkinen gets sent off for a blatant trip.

14:18 – They have cheerleaders in the stands. Not only do they have cheerleaders, they change outfits every period. The third period features each of them in a wifebeater with a player’s name and number on the back. Out of the 25 I count, 15 are wearing #51. He’s a baller over here too, folks.

11:44 – All tied up. Larry Flip scoops a pass at center ice and takes it all the way, finishing on a nice backhand. While Ilari went up the middle, Val coasted on the left wing, well behind the play. Seems to be the story of the night here in Helsinki. Either that or he just “knew” his brother would score. I bet that’s what he goes with in the post-game presser.

11:05 – Great rush from Pulkkinen. Got ridden to the boards and still took it to the net hard. He’s getting better as the game goes along. A lot to be excited about with this kid. I could see him and Goose Nyquist as a scary tandem in two years.

8:19 – Saipa retakes the lead on some lazy defensive play. Either that or #63 had too much beer at the intermission. He had a great view of the puck going in, however, as he was down on his face just in front of the crease.

1:22 – Empty net for Jokerit. Team Flip is out and Val is breathing hard as he steps in for the faceoff…which he loses (SURPRISE!).

0:03 – Oh man, what a series. It’s like someone finally told Val he’s supposed to do something other than coast around the ice. Jokerit with a 6-on-4 for a full two minutes and team Filppula was all over Saipa. Val dug a puck loose out of the corner, backhand flipped it across the front of the net to Ilari who ripped one right into the pads of the goalie. Except it wasn’t covered and sat in the crease for a full two count before Larry Flip stepped in and poked it into the gaping net. Crowd goes wild! BUT WAIT! HERE COMES BRAD WATSON FROM THE STANDS TO WAIVE IT OFF!!! PANDEMONIUM!!! CONFUSION!!! DESPAIR!!! LOUD COORDINATED CHANTING IN A LANGUAGE I DON’T UNDERSTAND!!! ADVERTISING EVERYWHERE!!!

0:00 – Wait, what’s all this? The fans are no longer booing. They are…leaving the arena in an orderly fashion??? What the fuck?

0:00 – Seriously, it’s like the waved off goal never happened. The teams salute the fans, folks make for the door, and the arena is empty in under 10 minutes. If this was Detroit, we’d still be pissing rage in the stands and trying to slam that extra beer we bought at the beginning of the 3rd period in case of overtime. I can’t comprehend this.

0:00 – OK, that’s all from Helsinki. Quite the experience and I had an excellent time. Here’s hoping we get some hockey back in States in short order.

3 thoughts on “About Last Night: The Finland Chronicles”