Four of Russian Five to Return 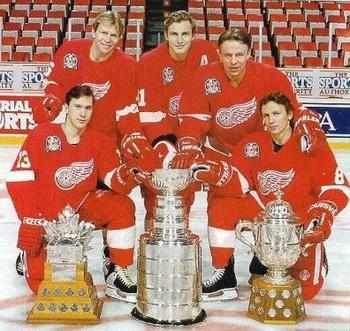 This afternoon, the Detroit Red Wings announced a few more participants for this upcoming Winter Classic’s Alumni Game. Viacheslav Fetisov, Sergei Fedorov, and Vladimir Konstantinov have committed to representing the Wings at Comerica Park, adding a touch more nostalgia to the game that will already be rife with it. Their Russian Five “linemate” Igor Larionov had already committed.

As you’ll recall, the Wings famously put five Russian players together for the first time in North American hockey history, and magic was created. Unfortunately, Vladimir Konstantinov’s career was cut short following a limousine accident just a few days after the 1997 Stanley Cup victory — his role was not specified, but I’m sure he’d love to play if he could.. The fifth Russian to make up the famous unit, Vyacheslav Kozlov, is not included on the roster update.