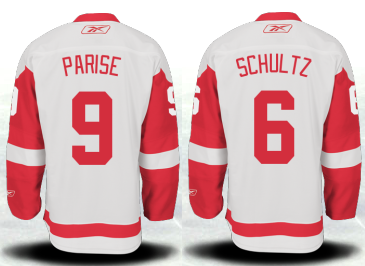 Last night, the Detroit Free Press’ Jamie Samuelsen posted an entry on his blog, that – in short – examines whether numbers should be unretired as a method for honoring those players who have meant so much to an organization. The Red Wings have a handful of sweater numbers hanging in Joe Louis’ rafters – players whose digits may never be worn again because there’s simply no way anyone could ever live up to Steve Yzerman’s #19 or Gordie Howe’s #9. You can go ahead and add Nicklas Lidstrom’s #5 to the ceiling, since no one will dare ask for it anytime soon.

I understand both sides of the argument. On one hand, these players’ contributions need to be honored and jersey retirement (at least, in Detroit) isn’t something taken lightly. All of the men listed above were extraordinarily valuable to the Red Wings, to Detroit, and to the game of hockey. Sawchuk is legitimately a top-five goaltender all-time, Howe is legitimately a top-two hockey player all-time, Lindsay is one of the most important figures in hockey history, Delvecchio played over 1500 games (all of them for the Red Wings) before stepping behind the bench, Abel was the third member of the fame Production Line that this space is named after, Yzerman may as well have been the second coming when he came to Hockeytown at a time when he was needed most.

Aurie and Konstantinov are two men whose contributions were cut short – the former’s broken leg didn’t allow him to regain the form that made him a fan (and organization) favorite, the latter’s devastating limo accident three days after the 1997 Stanley Cup victory has served as an inspiration for 15 years.

If a Red Wing player wears the No. 9 for a game or for a season, maybe it is a chance to honor Gordie Howe once again.

Maybe that’s true. Or maybe it’s being said right now because two of the guys near the top of the Wings’ wish list wear numbers that wouldn’t be available to them. Zach Parise, the Devils captain has worn #9 since breaking into the NHL; and Justin Schultz, the Wisconsin defenseman who is very unlikely to sign with the Ducks, has helped to make #6 famous in Madison. Would a uniform number be a deal breaker for either of these gentlemen? I can’t speak for them, but decisions have been made based on even less in this league, so who knows.

With sixty percent of the first 10 digits unavailable for newcomers, Brendan Smith rocking #2, Jakub Kindl in #4, and Justin Abdelkader wearing #8, one of those guys would have to settle for #3… or else they’re going to be in something like #28 (which has pretty much been assigned to Tomas Jurco) or #36 (last worn by Jordan Pearce).

Obviously, there’s a lot of speculation going on here. But is taking numbers that have been retired out of circulation wise for a team like the Red Wings? The Maple Leafs “honor” numbers, allowing current players to wear them while also hanging them in the rafters. Is that where we’re heading in Detroit – or will they honor their history with the finality of never allowing another to wear what has been so proudly and deftly worn in the past?

I’ll leave the answer to you. Is Samuelsen onto something… or is this a political play at a time during which the Wings will be fighting and clawing for both of these young potential superstars?