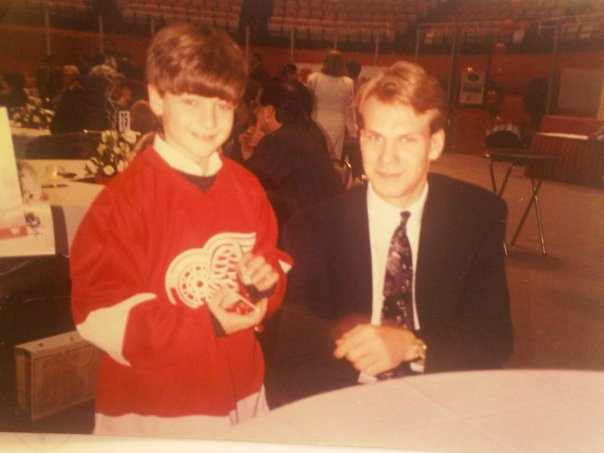 We all knew the writing was on the wall when we received the press release announcing the conference. Re-signings, even when they involve your generational talent and captain, don’t get a press conference. They get a conference call or a simple release. Press conferences are reserved for hellos. And goodbyes.

Unfortunately for every hockey fan on the planet, today’s announcement was to say farewell to one of the greatest players to ever strap on skates. At exactly 11:04am on Thursday, May 31st, 2012, Nicklas Lidstrom was able to walk away on his own terms — and did so by saying the words “after twenty seasons as a player for the Detroit Red Wings, I am announcing my retirement.”

For the first time in more than twenty-one years, the Detroit Red Wings will not have Nicklas Lidstrom watching their backs. You don’t need us to remind you of the accolades that line Nicklas Lidstrom’s trophy room, but we’re going to anyway because I never get tired of writing it:

Nearly every single thing that can be accomplished by an individual human being has been accomplished — several times over — by our beloved Nick. Anyone that covers the game will also tell you that he’s the kindest, classiest individual away from the ice. Having met him on a handful of occasions, I have only fond memories of interacting with him and I’d like to invite you to read a post written several years ago (as well as its follow-up from a few months later):

My second time around, in 1991, I noticed a younger looking guy sitting at a table, with no one but a young lady around him. He seemed really shy, kept to himself, stayed seated, didn’t really get into schmoozing so much. I asked my mom if she thought he was a player or if he was just another fan in attendance, like we were. We decided to go over and strike up a conversation.

He had a pretty thick accent, and he introduced us to his beautiful then-fiancee (now, wife). We talked for a good twenty minutes, the two of them couldn’t have been any nicer. Throughout our entire conversation, I don’t remember a single person coming to the table to meet him, but that could just be the memories of a nine-year-old. He said that he hadn’t played in Detroit yet (which explains why nobody was knocking chairs over to shake his hand), but he was excited to join the team and hoped he could stay in Motown for a long time. He told me his name was Nicklas, shook my hand, and signed my jersey right between the shoulder blades, just below where Ted Lindsay had signed. How symbolic.

Almost twenty years later, it’s hard to imagine I ever had that kind of time with such a special hockey player.

But as fantastic as those moments were, they don’t even come close to sharing a private, lengthy conversation with Nicklas Lidstrom. I remember watching some 1991-92 games on television, hearing his name, and saying, “hey, that’s the guy we made friends with!” I always hoped he’d succeed, and for those first couple years, the “guy from that dinner” was how I thought of him.

It didn’t take long, however, for him to go from “that guy from that dinner” to the “future captain,” the “future Hall-of-Famer,” the “perennial Norris winner.”

He seemed genuinely happy that we came by and chatted with him, and when it became time to move on, he seemed a lot more comfortable talking with folks, less embarrassed by his accent, and started making the rounds. I doubt he remembers that chat, but it meant the world to me, a nine-year-old diehard Red Wings fan. Nearly twenty years later, it still means the world to me.

Hard to imagine that he was ever a newcomer. No one in the NHL — particularly today — carries half as much cachet as Nicklas Lidstrom does.

For his brief friendship with a nine-year-old Wings fan, his continued cordiality in our few meetings, and his genuine graciousness aboard Red Bird, I wish that I could properly thank Nicklas Lidstrom in person.

For his dedication to hockey, and particularly the Red Wings, his unwavering stability on the blueline, and the grace with which he’s handled every single thing that’s been presented to him, the entirety of Red Wings Nation should thank Nicklas Lidstrom today.

Congratulations on an absolutely unbelievable career. It’s entirely possible that we’ll never see another player of the caliber of Nicklas Lidstrom.

2 thoughts on “Nick Steps Away”