You should be excited about Gustav Nyquist 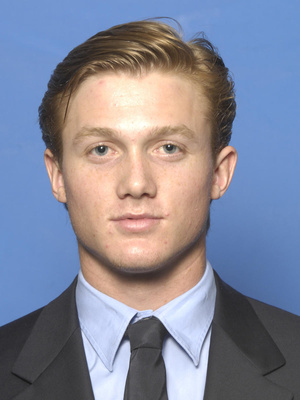 The Wings’ late round draft record is no secret. They unearth gems like Pavel Datsyuk, Henrik Zetterberg, and Tomas Holmstrom in the sixth, seventh, and tenth rounds — respectively. We’re reminded of that fact every few days, particularly when we’re stuck watching an opponent’s feed on Center Ice.

In June of 2008, fresh off of their fourth Stanley Cup victory in 11 seasons, the Red Wings found themselves in a familiar position at the draft: they’d be picking dead last in every round except for the second — where they wouldn’t pick at all, having dealt that selection away to the Kings in a package that brought Brad Stuart to Hockeytown.

Ken Holland and Jim Nill always say that if you can find two players in each draft that will eventually contribute to your program, it was a success. Most years, that isn’t a problem. 2008 was a different beast.

Their first and third round picks from that draft are a little disappointing. First rounder Thomas McCollum has failed to to make a decent impression on the Wings — or even the Griffins, for that matter. Third rounder Max Nicastro has been removed from Boston University and its hockey team among allegations that he’s guilty of sexual assault on campus.

Fifth rounder Julien Cayer has completed his senior season at Clarkson University and must be signed by August 15th or the Wings risk losing his rights. With the 50-man contract limit what is, and the Wings’ available slots, it’s unlikely that Cayer has a future with the Red Wings — though he’ll likely be signed to the Griffins/Walleye without the Wings’ “involvement.” Sixth rounder Stephen Johnston is no longer Red Wings property, as the team declined to sign him after two years. Seventh rounder Jesper Samuelsson is a European player whose rights will never expire, but he doesn’t seem inclined to come to the States and toil in the minors.

That leaves the fourth round pick. The 121st pick of the weekend. The Wings looked to Sweden, as they often have, and selected an undersized forward playing for Malmo’s junior team who was not selected at all the first time he was eligible for NHL selection. He was committed to come to the United States and play collegiate hockey — something he told us he knew he wanted to do all along — for the Maine Black Bears, meaning the Wings had four years to make a decision regarding signing him instead of the usual two: a perk for an unknown quantity. His name: Gustav Nyquist.

After nearly scoring a point-per-game in his freshman year, he absolutely tore the roof off of the collegiate game. He was a back-to-back Hobey Baker finalist in his sophomore and junior years, and it was clear that there was nothing left for him to accomplish — individually, anyway — at that level. He signed an amateur tryout with the Griffins to finish off the 2010-11 season. He scored immediately and — after two years of constant prospect ranking chart-climbing — we got a better look at a kid that was as exciting a prospect as the Red Wings have had in recent memory.

No disrespect to guys like Cory Emmerton, Mattias Ritola, or Jan Mursak — but “Goose” had a touch of mystique to go with his pedigree. Guys like Darren Helm and Justin Abdelkader — who had cups of coffee with the Red Wings during playoff runs or as call-ups — were a little more of a “known quantity” than Nyquist: they’re grinders, they’re hard-working bottom half of the lineup kind of players. Nyquist, like Zetterberg and Datsyuk before him, was built to be a top line player. The only unknown about that is the “when.”

This year was Nyquist’s first professional season. Forgoing his final year of collegiate eligibility, he signed an entry-level deal with the Wings and he knew he’d likely have to spend some time with the Griffins, because that’s how the Red Wings roll.

Coming into training camp, there were a few guys vying for the final two spots on the NHL roster. Cory Emmerton, who could not be sent to Grand Rapids without first being waived, seemed like a shoo-in. Jan Mursak, who was also out of options, was the de-facto “last man in.” A handful of tryouts, including Fabian Brunnstrom, made things interesting — as did recently-signed talented veteran Chris Conner.

And Nyquist. Who was given Brendan Shanahan’s old #14 (as Derek Meech weeps), instead of some bullshit number assignment like 52, 63, or 48. As trivial as it sounds, the Wings seem to “groom” their legit prospects for the show by giving them numbers like 2 (Smith) or 28 (Jurco) or 21 (Tatar).

When Mursak was injured, the competition for that final roster spot got interesting. Gustav Nyquist, who blew the doors off of the pre-season, became the fan-favorite of many of us. At one point, I proclaimed that he was one of the twelve best forwards in the organization right then. If the best players truly made the team at the end of September, he would simply have to be a Red Wing. But that’s not always how things work. The safe thing to do would be to sign one of the tryouts — it would end up being Brunnstrom — and allowing Nyquist to grow his game in Grand Rapids. Fair or not, it was probably for the best — Nyquist would get big minutes on the farm and would get acquainted with the speed and size of the pro game.

All he did with his first season in the American Hockey League was be named to the Western Conference All-Star Team, break the Griffins’ franchise scoring record for rookies, and usurp several players on the depth chart — including Tomas Tatar and Chris Conner, both of whom have played very well in various stints with the Wings. The first forward called up from the Griffins this season occurred on Halloween. It was Nyquist.

With the injury situation what it always seems to be, Nyquist has been able to play a few games Detroit. You hate to get too excited about a young man when they’re only in the lineup for a handful of games, but there’s something about this kid. So far, having played in 11 games — most with severely depleted lineups — Nyquist has seven assists. Five of those assists have come in the last six games. He’s playing on a line with Todd Bertuzzi and Pavel Datsyuk. He’s playing more minutes than some of the more established players in the lineup — even though he’s not getting a sniff of the power play. If he kept up the pace he’s on for a full season, he’d hit the 50-point mark and would have 47 right now: that’s more than everyone on the Red Wings except for Franzen, Datsyuk, Zetterberg, and Filppula.

And it’s not just the score sheet. He’s making things happen — and several times a game. It doesn’t look out of place at all in this league. The last time I can remember someone adjusting so well to the NHL game in his first dozen contests was Valtteri Filppula. And he had a full season of AHL hockey under his belt.

Goose is a winner everywhere he goes. Three years in Maine proved he was one of the better players in college hockey. Less than a full season in the AHL proved he was capable of quickly adapting to professional hockey: he’s still the Griffins’ leading scoring, despite playing ten fewer games than most; he’s also tenth in AHL scoring, having played fewer games than everyone above him — hold for Keith Aucoin. Less than a dozen games in the NHL proved he’s going to be a legit player for this team — and soon.

Don’t be surprised if Gustav Nyquist never plays another game in Grand Rapids.

When Helm and Franzen are well enough to play, the Red Wings are going to have a decision to make regarding the roster and which twelve forwards play in the playoffs. Perhaps it’ll be a chance to rectify an error made in October — and Goose will be on the big club for good.

9 thoughts on “You should be excited about Gustav Nyquist”