A Time for Accountability 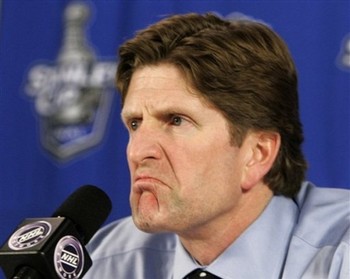 I went to bed last night like many of you reading this right now did: pissed off, dejected, completely over “it”. The “it” of course being this iteration of the Detroit Red Wings, a team with talent up and down the lineup, but sub-par results to show for it. I didn’t bother to read the postgame comments from the players and coaching staff, because at this point it’s almost laughable how predictable these guys are. “Just need to play better.” “Didn’t play for a full 60 minutes.” “Just need to find a way to work through this.” These and other favorite comments have been a staple of the Red Wings under Mike Babcock, which isn’t to say it’s the wrong way to handle things. It just is what it is and we’ve come to expect that after a loss, the Wings will put on the PR hat and say nothing of any value. Do they owe it to us? Probably not. But it sure would be nice to see after losing YET AGAIN to the rival Sharks. The lack of emotion is the crux of the problem, and it’s a problem that’s been growing for some time now.

So imagine my shock when Babcock actually deviates from the course and decides not to press the button on his arm that delivers his programmed responses. From Teddy Kulfan:

Before the Wings practice Friday, coach Mike Babcock will meet with his team.

“The other teams are trying to. We have some decisions to make.”

A cursory glance would lead the non-informed follower of the Wings to find this about as interesting as a peanut butter and jelly sandwich. But for those that follow Babcock, this is a departure from the norm. This is venturing into an area that we rarely see from a guy who does must of the talking with his scowl and piercing stare. And, frankly, this is a good thing. Of course, there’s some out there that will say this is nothing more than Babcock posturing to make the masses believe that he is still in control of this team, but the real fact is that Babcock is NOT in control of this team by his own choice. He recognizes that he has a group of veterans on the ice that can feel the pulse of the locker room and share the burden of leadership, and he’s let them run with it. That leadership looks a little something like this. From Helene St. James:

“We’ve just got to stay positive. We have to. There will be people that will be negative enough. Players in here, we have to stick together and be positive.

If you continue through the article, the next part is pure drama. Apparently, Babcock walked away and dismissed questions about the production of two of his “leaders”, which the Chief correctly points out could be a not-so-subtle jab at both the contributions and leadership attributes of Zetterberg and Datsyuk. Again, folks will say that this is a sure sign that Babcock is nothing more than a guy in a suit, but the truth is that Babcock is doing exactly what he needs to do: demanding accountability.

Make no mistake, over the past three seasons, there’s been no accountability. There’s been excuses and there’s been injuries and there’s been everything under the sun except for the guys with the extra letter on their sweater stepping up and saying the blame falls on them. Well, except for Kris Draper, whose absence is glaringly obvious from the lack of leadership this team has shown this season. While we may not miss his lack of production, there’s no denying the fact that the man was a leader, and I’ll be one of the first to connect the dots and say that the lack of leadership in the locker room is  contributing to the craptastic effort that is quickly becoming a staple of this Red Wings team. If you think this is a veiled shot at captain Nicklas Lidstrom, then let me set all doubts aside and make it very clear:

Lidstrom’s leadership style is not cutting it.

That’s no knock against a great human being and a fantastic hockey player. The fact is, though, that when the girt and heart that was Steve Yzerman left and retired, Lidstrom had to count on others to bring that same sense of purpose to the locker room in Detroit. Look no further than a guy like Dallas Drake, a guy that all of us hated during most of his career, but quickly embraced when he made it clear he wanted a Stanley Cup and would step on toes in the locker room if that meant getting one. Draper was the same way, but the urgency with him was diminished due to the success he already had throughout his Wings career. Yet through it all was Lidstrom, quietly leading and contributing with his play on the ice while others took care of the administrative “duties” in the locker room. Now there’s no one there, no safety net to get angry and peel the paint in the locker room. Just Lidstrom, Zetterberg, Datsyuk and newly minted Niklas Kronwall, all preaching patience and cohesiveness and that “things will come in due time.” It’s the same dumb message we’ve heard for the last three years. It’s tired. No, it’s REALLY tired.

I watched Joe Pavelski score that shorthanded goal last night and wondered if the Wings would just pack it in and go through the motions in the second period. Sure enough, the intensity of the first period was gone, replaced by methodical shot after methodical shot from the point, with nobody crashing the net looking for rebounds. There was no panic. The Wings were patient, just like their on-ice leadership core wanted them to be. And while all that patience and precision was “working out the kinks,” the Sharks got down to business and took it to the Wings. They were urgent while Detroit was “patient.” They did the little things while Detroit played “together.” And at the end of the game, the scoreboard showed whose system and methodology was far superior. If you want proof, just watch Joe Thornton steal the puck from Zetterberg while he maneuvered for the “right” shot in the second period, go the other way and essentially kick Detroit’s ass to the curb.

So if Mike Babcock wants to call this team together today and take accountability for trying to get this team back on track, then I applaud him. It’s obvious that Lidstrom, Zetterberg, Datsyuk and Kronwall aren’t going to do it, and don’t give me the “it’s not in their nature as quiet leaders” bullshit. It’s painfully obvious that this quiet “lead by example” strategy isn’t getting it done, and Datsyuk and Zetterberg’s stat sheet shows it. I get that these guys can’t be something they aren’t, and that’s fine. But part of their job is finding someone who isn’t afraid to get mad and push the envelope, and they all have failed terrifically in that effort. It’s funny, a guy like Dan Cleary seems like a natural fit to step up and be the angry force in the locker room, but it doesn’t seem like that’s happened yet. Why the hell not? For a guy that’s been marginal in terms of play this year, I would expect him to make up for it in the locker room. Doesn’t seem to be the case.

So here we are, with Mike Babcock now playing the bad cop and stepping to the plate to try and take control of this thing again. If it doesn’t work out, the blame doesn’t all fall on him. He’s got four guys who call themselves leaders in that locker room, and it’s about time they stepped up and pulled this team together. Because right now, this team and their philosophy are so damn tired. We deserve better, and it’s time for the leadership of this team to step up and be accountable for their roles in this mess.

11 thoughts on “A Time for Accountability”