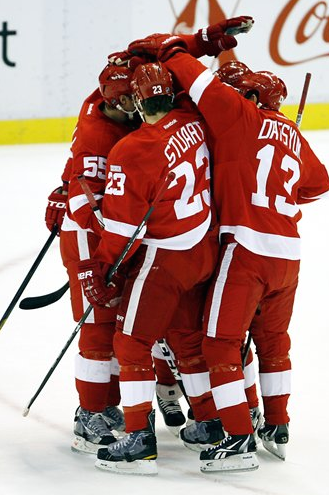 The Skinny
Streaky streaky… five up, six down, and now four up again. Detroit finished their season-long six-game homestand with a 5-2 victory over the Pacific Division-leading Dallas Stars. The game began as a goaltending duel, with Stars backup Andrew Raycroft every bit up to the challenge, and Jimmy Howard continuing to make some fantastic saves to keep the Wings in it early. Three more goals from the blueline (White, Kronwall, and Stuart — finally) to go with a pair from the forwards (Franzen and Helm), and the Wings have very quietly scored 17 goals in the last four games.

Speaking of Ian White, he left the game in the third period after blocking a shot with his face — sacrificing his body for the team. According to the team, he took a puck just under the right eye and required “some” stitches and did not return. Here’s hoping he’s okay to play on Tuesday, since he’s been very impressive in his first fifteen games as a Red Wing.

The game would get a little messy with 14 seconds left. Stars’ leading scorer Jamie Benn would drop the gloves and kick the everloving shit out of Jakub Kindl. Kindl never really had a chance to get his feet under him and didn’t seem too thrilled with the idea of getting into a scrap.

The Disch Approved “Horsecop” of the Game
Ian White. Dude scored a bomb of a goal, kept a definite Stars goal out of the net with his noggin, got some repairs in the room, and rocks one of the league’s best ‘staches in Movember. Great acquisition this summer, we hope he keeps it up.

The Riggy “Shitbox” of the Game
Hard to pick one tonight… no one was minus and there were only two penalties taken. But one of those penalties (Nicklas Lidstrom’s interference call in the first) led to a power play goal for the Stars. So, I guess, by default, we have to go with Lidstrom. And I feel dirty for having written that.

What’s Next?
Tuesday night, the Wings head to St. Louis to face Ken Hitchcock’s new team. It’s the fourth Wings Wings Tuesday, and I’ll be behind the bench for Central Catholic High School for our fourth game of the season. Wish the Wings and the Vikings luck!