One More Dose of Inspiration 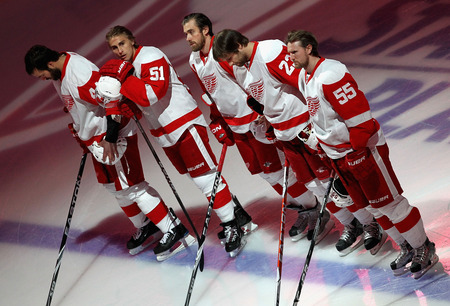 Petrella mentioned it in today’s pregame, but it’s been one hell of an offseason for anyone who is a fan of the sport. Nothing helps ease the pain of a trying time like familiarity, and that’s exactly what we will get today when the Wings take to the ice and begin their campaign for greatness anew.

Right after the incident in Russia, I received a number of e-mails from folks referencing the piece I wrote at the beginning of the season last year and letting me know that they felt that the sentiments within were never more appropriate based on all of the tragedy that has surrounded the game of hockey this year. I was surprised that so many folks remembered it and was even more surprised that the message continued to carry on, even after a year of sitting on the shelf. More than one person had asked if I planned on writing something similar this season, and frankly, the thought didn’t really cross my mind. Maybe it’s because when last season started, the Wings were no longer Central champs and there was nothing concrete and stable to latch on to that would make folks feel safe and secure again. Emotion carried the day and over the course of the season we found our rocks of support.

This year feels less emotional and more businesslike for the Wings, which (in my mind) is a good thing. The transition from old to young is full steam ahead, and the uncertainty of this year pales in comparison to last year. Sure, there will continue to be bumps, but there’s just something about this season that makes me feel like the Wings are finally ready to make a run at reclaiming true greatness. New players. New coaches. New mentality. When Pope John XXIII called to order the Second Vatican Council, he famously threw open the windows in St. Peter’s Basilica and declared that it was his intent to “let in some fresh air,” symbolic of the change that the Catholic Church needed at that time. The Red Wings are in the process of doing the same, and when names like Emmerton, White, Brunnstrom and Mursak are on the ice, the message will be loud and clear: change is happening and it’s time to get on board.

It’s OK to be nervous when the puck drops. That’s human nature. So is change, and there has been so much of it this offseason that a regular season hockey game may be just what the doctor ordered  for the sport’s fanbase. Rather than write something completely new, I’ll harken back to last year’s post and let it do the talking. It seems so fitting and so right. Just like regular season hockey in Detroit.

Tonight, fans both young and old will walk through the red plastic curtains and see a surface that means something completely different to every set of eyes that view it. For some, it will be the first gaze of a lifetime. For others, it will serve as familiar source of comfort and reassurance that one of the constants in life has returned yet again. Many will watch the game on its surface and will worry about things that they just can’t control. It’s the nature of the beast and it’s difficult to contain, but emotions are a powerful force and a very real one at that. Some will wonder if this is the last time a guy named Nick will take the ice for a home opener or whether or not a young goalie named Jimmy has what it takes to lead his team to a series of victory laps around the chewed up surface next summer. Yes, there will be worry and there will be excitement. There will be joy and there will be despair. There will be wins and there will be losses. It’s inevitable and ultimately accepted.

Through it all, though, IT will be there for each and every game, knowing full well that the game it supports is what all of those emotions are ultimately about. And while it can’t ultimately dictate the wins and losses on any given night, there are some who believe that a frozen sheet of water is a living, breathing thing. Maybe it shifts ever so slightly to pool the water in a certain way that causes an errant pass to somehow find the tape of a teammate. Maybe a fortuitous bounce off of the surface leads to a goal instead of a save. Who are we to tell them they are wrong? Who are we to cast doubts on those beliefs? Some people believe in God. Others believe in a higher power. Some believe in fate, luck and chance. Us? We believe in hockey.

Red Wings hockey to be exact.

The season is upon us. Hockey is back.