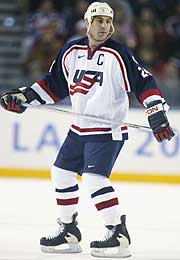 Congratulations to former Red Wing defenseman-turned-special management assistant Chris Chelios on being inducted into the United States Hockey Hall of Fame. He will be joined by Keith Tkachuk, Gary Suter, Ed Snider, and Doc Emrick to make up the Class of 2011.

Chelios is eligible for the Hockey Hall of Fame (for which he’s a first ballot shoo-in) in 2013, as rules stipulate players must be retired for three seasons to be considered eligible.

From the official press release, here is Chelios’ section, as well as some basic information about the U.S. Hockey Hall of Fame:

Chris Chelios, Mike Emrick, Ed Snider, Gary Suter and Keith Tkachuk will be enshrined as the United States Hockey Hall of Fame Class of 2011 it was announced today by USA Hockey. The five-member class will be formally installed into the Hall in Chicago this fall, with a date to be announced in the near future.

“It’s an extraordinary class,” said Ron DeGregorio, president of USA Hockey. “The varied contributions to the landscape of hockey in our country is truly amazing and, collectively, this class has positively impacted every level of hockey.”

With a professional career spanning 26 seasons, Chris Chelios is the all-time leader in games played by a defenseman in National Hockey League history (1,651). The second-round draft pick (40th overall) in the 1981 NHL Entry Draft of the Montreal Canadiens went on to win three Stanley Cups and three Norris Trophies, along with a silver medal with the U.S. Olympic Men’s Ice Hockey Team in Salt Lake City in 2002 and an NCAA national championship with the University of Wisconsin in 1983. Chelios played seven seasons (1983-90) in Montreal, nine in both Chicago (1991-99) and Detroit (1998-2009) and one season in Atlanta (2009-10), amassing a total of 948 points (185-763), which is 10th all-time among NHL defensemen. The Chicago, Ill., native played in 11 NHL All-Star Games, representing three different teams. Additionally, Chelios was a staple in international hockey for more than three decades. He is one of only two male players to represent the United States at four Olympic Winter Games (1984, 1998, 2002, 2006) and captained his final three Olympic squads. He also helped the U.S. defeat Canada to win the 1996 World Cup of Hockey, and represented his country a total of 10 times on the international stage.