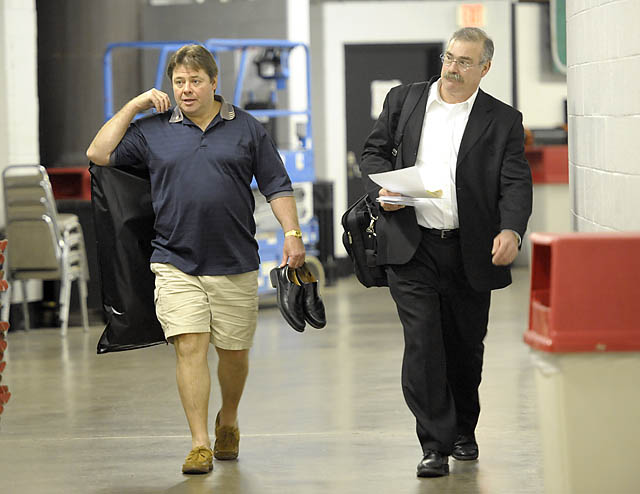 It’s not often that change is viewed as a positive, especially when that change comes to an organization as successful as the Detroit Red Wings. Sure, the Wings have seen all kinds of change over the last 20 years, from players to coaches to general managers. In professional sports, change is a constant and no organization is immune to it. The 2010-2011 NHL season will come to an end tonight in Vancouver, yet the Red Wings already find themselves in the midst of a number of changes on a number of the aforementioned fronts. Brian Rafalski announced an end to his Hall of Fame career only a few weeks ago. Chris Osgood and Kris Draper, staples of the organization for many, many years find themselves facing the very real possibility that their hockey playing careers in Detroit may have come to an end. Nicklas Lidstrom continues to mull over the thought of playing one more year at an age where most guys are more focused on chasing their kids around the living room rather than chasing another Stanley Cup.

So it may come as a surprise to some that two of the most important changes for the Red Wings this year will be the departure of Mike Babcock’s assistant bench bosses: Paul MacLean and Brad McCrimmon. In today’s NHL, it’s easy to forget about the guys on the bench who don’t garner the spotlight and the microphone at the podium, but there’s an appreciation and understanding around Detroit of just how important the assistant coaches and support staff are to the success of the team. When Scotty Bowman was helming the Wings, nobody ever doubted the competence and importance of Barry Smith and Dave Lewis. Had one of them not been on the bench, many a fan would have noticed something out of the ordinary. Sure, Lewis’ stint as the Wings head coach didn’t quite pan out, but that’s the reality of coaching: some guys are directors and others excel at handling a defined task.

It wasn’t too long ago that the Wings found themselves in a similar situation. Fresh off of winning the ’08 Stanley Cup, trusted Babcock assistant Todd McLellan departed to take the helm in San Jose, paving the way for McCrimmon to find his way to the bench. Now instead of one coach heading out, the Wings watch two assistants depart to take the reigns with another club. For McCrimmon, it’s overseas to Russia to lead Lokomotiv Yaroslavl of the KHL. MacLean will head over a border as well, up to Ottawa to helm the Senators. Each takes with them a wealth of experience gleaned from their time with the Red Wings and Babcock. But each also takes a piece of the Wings that needed to be changed.

As the season wore on this year, McCrimmon quickly became the whipping boy for the stagnant production from the Wings power play and the reduced effectiveness of the penalty kill. A defensive specialist, McCrimmon also found himself in the line of fire when it came to the underachieving Jonathan Ericsson, with many wondering whether Ericsson’s talent or McCrimmon’s coaching was to blame. Despite the criticism, McCrimmon did bring a wealth of NHL playing experience to the blue liners and the guys seemed to relate to him, labeling him a “player’s coach,” a seemingly stark contrast to the ever-grumpy Mike Babcock. Still, there was a sense among many that McCrimmon just didn’t…”fit.” In an organization that prides itself on professionalism and hard work, McCrimmon’s demeanor seemed to clash with the rest of the staff. It’s easy to envision the rest of the staff reviewing game film and studying strategy on flights between cities. Not saying McCrimmon didn’t do that, but he seemed more likely to crack a beer and a few jokes than dive head first into a laptop to study defensive rotations. Fair or not, there’s a reason fans and media started giving McCrimmon the wary eye, and the terms of his exit lend credence to the idea that the Wings front office saw something similar.

On the other side of the coin is Paul MacLean. He’s been with Babcock since their days in Anaheim and he’s paid his dues while younger and more attractive coaches found their way to the NHL benches. He’s been rumored for a number of jobs over the past two years, both times considered a top contender to take over the bench of the Columbus Blue Jackets. When this season ended and MacLean had no new contract, the rumblings began in earnest that he may follow the lead of McCrimmon and find a head job somewhere other than Detroit. His golden ticket comes in the form of the Ottawa Senators, and MacLean’s steady hand will be counted on to calm the turmoil in Canada’s capital. Although untested as an NHL bench boss, MacLean deserves his shot and the Wings brass knows that. But they also know that MacLean’s presence is another reminder of a Wings organization that has struggled to get past the second round of the playoffs the last two seasons, so change comes with the silver lining of a fresh start for both parties; MacLean fulfilling the dream of being an NHL coach and the Wings freshening up the furnishings in a solid and dependable house.

Now comes the interesting part. The Wings have an opportunity to set the stage for the future of the organization for the foreseeable future, all while retaining their head man and one of the most respected head coaches in the league. The Wings have the luxury of following a trend of bringing in younger coaches with a track record of success at various levels while keeping the steady hand on the wheel of the most respected franchise in the NHL. We’ve already heard names like Ken Hitchcock and Todd Richards being thrown around, but it’s hard to envision Hitchcock stepping back professionally and becoming an assistant on a day-to-day basis. And while Richards may seem like an attractive option as a former NHL head man, there was nothing overly inspiring with his coaching style in Minnesota that makes him a “must-have” for the Wings. Instead, the Wings should continue to look at guys who have found success in the lower levels of professional hockey, namely Bob Boughner and Peter DeBoer. Both have ties to the Detroit/Windsor area. Both have NHL experience as either head men or assistant coaches. Both have won Memorial Cups in the last 10 years and know how to bring along young talent, something that the Wings will need more than ever as older players hang up the skates and newer faces make the transition to the league. DeBoer would likely jump at the chance to join the Wings. Boughner may take a little more work, but it sounds like Holland, Babcock and Co. are already greasing the skids to get the Boogieman behind the bench.

At the end of the day, the Wings need this change. They need the infusion of new thinking and strategy and they need guys who know how to relate to the young kids. They need a healthy blend of one coach looking to make a splash with a major organization and another with a chip on his shoulder, looking to prove his worth in a league that deemed him “not good enough” to be the head man for a faltering and flopping franchise. They need a pair of guys that have the ideas and ability to get Babcock out of his comfort zone and potentially past his protege in San Jose; the one who has eliminated the Wings the past two seasons and owned them during the regular season. Most importantly, however, the Wings need a pair of guys that can motivate and challenge a group of players that have all the talent in the world but the penchant to shut things down and coast at the most inopportune times. Whether it’s DeBoer, Boughner, Richards or even Dave Cameron, rest assured that the Wings will make the decision that they feel is the best for the entire organization.

In the meantime, we’ll wait for Lidstrom to decide, wait for free agents to be signed and wait for the puck to drop on a new season in Detroit. But before we get ahead of ourselves, let’s take a second to embrace the good times, stew (once more) about the bad times and wish both Brad McCrimmon and Paul MacLean the best in their new endeavors. They were an integral part of this organization and that can never be disputed.