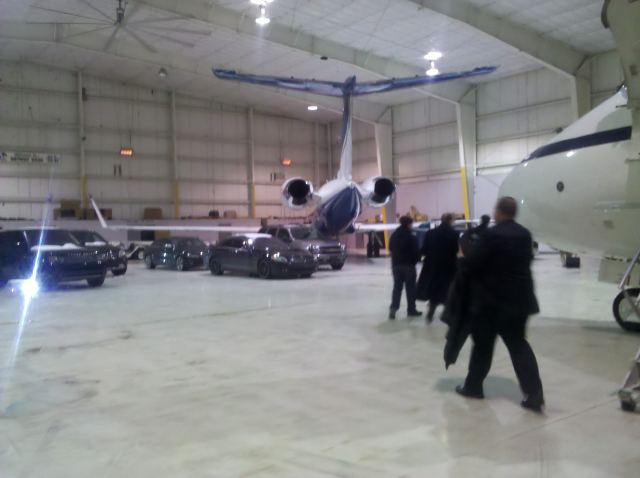 ON BOARD
We climbed the stairs to Red Bird, and it was clear that the players and management just wanted to put this weekend behind them. There weren’t many smiles to be had, but we were assured that the players would be willing to chat and sign some autographs if we wanted to mingle. Like the rest of the weekend, I didn’t want to disrupt them — and I’m not much for autographs, to be honest. I work in an industry where interacting with quote-unquote celebrities is kind of part of the job description and I’ve gotten used to enjoying their company as regular folks, rather than fawning all over them.

But these were my Red Wings. I’ve never loved anything the way I love the Red Wings. I was lucky to be born into a home where hockey was just kind of part of the deal. My mom has been a massive Red Wings fan from the late sixties, and my dad caught onto the game pretty easily once he arrived from Italy. I don’t remember a time in my life that the Red Wings weren’t important.

Nevertheless, I’m not much of an autograph-seeker — at least for myself — but I knew it was a unique opportunity to take advantage of this kind of access to the players and after urging from the team’s media relations manager Todd Beam, who insisted the guys would be honored to take part in signing an H2H2 shirt, I took a stack of t-shirts into the rear of the plane: one for them to sign… and plenty of others to give them as gifts, to thank them for having me over the weekend and for being generally awesome.

OUTFITTING THE WINGS
Before venturing to the rear of the plane, I thought I’d test the waters. After all, Todd Bertuzzi hadn’t been in a fantastic mood all weekend, and maybe handing him a t-shirt with his face on it wouldn’t go over so well. I showed Mr. Beam first, knowing he’d be honest enough to say something along the lines of “oh, no, he’ll totally kill you in the bathroom.” Instead, he had a chuckle which caught the attention of Ruslan Salei, who wanted to see it…which made Jimmy Howard perk up from across the aisle. I figured, hey, maybe some of these guys will have my back if it doesn’t go over as well with Mr. Bertuzzi.

Most of the guys were watching movies and reading eBooks when I headed back, and I hated to bug them, but every last one of them was gracious and willing to chat for a minute. I explained to everyone individually what we’re doing at H2H2, raising money for Children’s Hospital and accepting pledges, and that this H2H2 Shirt will be a prize that folks hope to win.

As Jimmy Howard was signing the shirt, I told him I had a gift for him and pulled a JIMMAH! t-shirt out of my bag. He lost his mind, absolutely loved it. He laughed about it and said that his wife is going to love it because that’s how she says his name when she’s peeved at him.

Darren Helm is the proud new owner of an Oh, the Helmanity t-shirt.

I had three Curly Fries t-shirts — for the three guys that have gotten us free Arby’s following Operation: Curly Fries. Nick Lidstrom was (SHOCKINGLY) very gracious and gave the idea a bit of a chuckle. I’m not entirely certain Johan Franzen knew what I was talking about as I explained that he had gotten Red Wings fans free curly fries for his massive five-goal performance (because, let’s be honest, if the guys aren’t aware of such things — and it seems like they’re not — it sounds like complete nonsense). Patrick Eaves was legitimately psyched about having a Curly Fries shirt and I hope, like that fan on Saturday morning, that he’s around for a long time. He was one of the more engaging guys on the plane and I enjoyed having a minute to chat with him.

And then I came to Todd Bertuzzi’s row. I had a 2XL Shirtuzzi in my hand, but I was still a little uneasy about what his reaction to a shirt bearing his scowling face might be. When I handed it to him, he unfolded it and half-smirked (I’d be told later that this was a huge victory) and the rest of the players wanted him to show it off. He spun it around and held it up to his chest for the rest of the guys to see, and everyone had a good laugh about it. Mr. Bertuzzi genuinely thanked me, extended his hand for a shake, and promised me he’d wear it in the locker room. I told him I hoped so and that I’d keep an eye on FSD pre-games to see if he does.

After all was said and done, I had the playing roster’s signature on an H2H2 shirt (and if you haven’t seen it, check it out below) that will be available as a prize for the Children’s Hospital Fundraiser. The team was honored to be a part of that and are very proud that their fans are involved in community events like this. Good on you, Hockeytown. 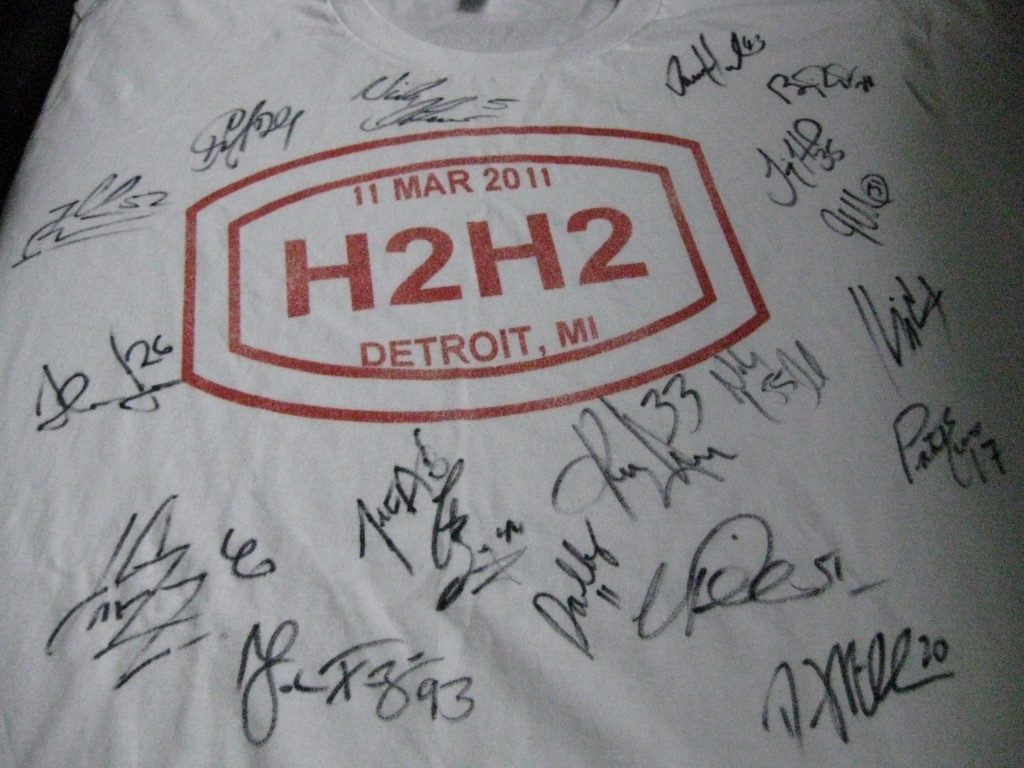 LANDING
As we approached Detroit, everyone was exhausted. It was about 1 in the morning (locally) and here was a plane full of people that had been going non-stop (some, obviously, more strenuously than others) for 48 hours and the promise of one’s own bed seemed to be keeping some of them going. I started to wonder how thrilled the team must be to have to clear the snow off of their cars and still travel a half hour or an hour to their homes.

But, in true rockstar fashion, they wouldn’t have to worry about that first part. After we landed, the plane taxied all the way into a private hangar… where their cars were waiting for them, warm, dry (for the most part), and ready to carry them home. I’m sure it’s obvious by now that these guys know how to live, but that was pretty darn neat to see.

Of course, not every player was comfortable handing their keys over, and a handful of guys walked with us through the building and out to the parking lot. As my dad and I begun to pull out of the lot, I noticed Valtteri Filppula clearing snow off of the back windshield. I say, “do you think we should give him a hand?” but as soon as we pull around near him, he gives a “eh, to hell with it” kind of face and jumps in the driver’s seat.

ONE MORE TIME
On the off-chance that some of them have been reading this series, I want to say it one more time: an incredible thank you to General Manager Ken Holland, Media Relations Manager Todd Beam, Executive Assistant Kathi Wyatt, various members of the Fox Sports family, the Detroit Red Wings players, coaches, personnel, and staff. You gave us an incredible weekend, and know how to run a team full of genuinely wonderful human beings. My dad and I will be forever grateful for the opportunity to escort you for a few days.