We like to have fun at The Production Line — we’ve had a hell of a time poking fun at the Shetuzzi, highlighting the pros and cons of midget wrestling, and using 80’s rap lyrics for players’ nicknames.

We also like giving deserving folks a few bucks. As you may remember, we were proud to host the H2H pledge drive, which — over ten games — raised $2,518.08, about fifty percent of the total that was donated to Children’s Hospital. We’ve said it before, and we’ll say it again — no one should ever be surprised by the generosity of hockey fans — particularly Red Wings fans.

This year, we’re excited to carry on the tradition — once again hosting a pledge drive, and once again raising money for Children’s Hospital — the charitable foundation that has partnered with H2H2 (official event date is set for March 11, 2011).

PLEDGES
For TWELVE games — a full month of the calendar — you’ll be able to make your ridiculous bets and hilarious pledges, and every dime goes to Children’s Hospital when all is said and done. The following games are open season:

Everyone’s total pledge will be due on MARCH 8TH.

If you want to make a pledge, click that giant button at the top of the page. It’ll take you to your e-mail client, where you can let us know exactly what you’d like to pledge — whether it’s $2/goal for the Sharks games, or $5 if Darren Helm scores, or something a bit more out of the ordinary. We had a lot of fun with them last year, and expect the same this year — but try to make it something quantifiable, if possible. Counting “bingo bangos” and if Player X was on the ice for Goal Y during Period Z of Game A was nearly impossible to keep track of. And we want to make sure the kids get every penny that’s coming to them.

For $55, you get entrance to the party, all-you-can-eat and drink (alcohol excluded), and a ticket to the Wings and Oilers.

Contact Jen MacRostie to reserve your spot — because space is limited. 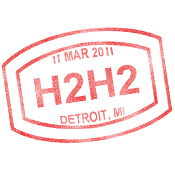