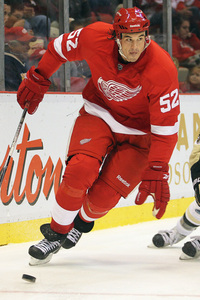 Coming up after the break: the thrilling conclusion to the Dropsy Downsy Puck Turnover Marathon (Claus Anderson, Getty)

The continuation of yesterday’s novel regarding pre-season player evaluations.

37 Doug Janik [waived October 4]
He may be TPL’s Hero #1, but he knows the score. He’ll be spending the year in Grand Rapids, maybe getting a call here and there to fill in if injuries occur on the blueline. I didn’t see much of him —  but I don’t have to. I know what he brings. Awesomesauce. Every single shift.

38 Thomas McCollum [assigned to Grand Rapids, October 3]
I dunno… maybe I’m way off base, but I’m a tiny bit alarmed that he’s not like Superstar Goaltender already. I’m sure that’s just me being anxious for the guy we used a first round pick on to deliver on that promise (and there is plenty of time for him to do so), but I’d love to be pleasantly surprised by a goaltender’s development just once.

39 Jan Mursak [assigned to Grand Rapids, October 4]
I was really impressed with Mursak, and I’d like to think he was the final waiver exempt player left in camp for a reason: to show Mattias Ritola that Mursak worked hard, played well, and actually made the decision difficult. You don’t get a spot just because you can’t get sent down without being waived, but you MIGHT get a spot if you play like you give a shit.

41 Ilari Filppula [assigned to Grand Rapids, September 29]
Valtteri’s older brother failed to impressed, but none of us should have expected he’d push for a spot in the Detroit lineup. Anyone worth their salt knew this was a Grand Rapids Griffins signing and maybe he builds his portfolio, and makes the jump in a few seasons — assuming he’s willing to deal with a few seasons in the AHL, unlike Ville Leino.

42 Mattias Ritola [waived October 4, claimed by Tampa Bay]
Don’t quite understand the heartache for a guy that doesn’t play like he wants it. I, too, have a problem with losing a guy for nothing, but it’s clear that he was not one of the top 14 forwards in the system — and who knows if he ever would be? Frankly, even if you remove the Draper/Miller factor and just focus on the players that are most deserving of fourth line minutes in Detroit, he’s still not in the discussion.

43 Darren Helm
Yup. I’m still in love with him.

44 Todd Bertuzzi
Yup. I still hate him. Though, to be fair, as I said on TP:60 — I’m impressed that he dropped the gloves. I still have a hard time swallowing that cap hit, given his complete and utter lack of… what’s it called?…hockey skill, but if the team and the League have given him the green light to SHOW EMOTION again, I’m all for it. I’m willing to give the guy a fair shot this year, after ragging on him pretty regularly for the year before, but I swear to God he’s going to whirling dervish himself into the ice before he scores #20.

45 Chris Minard [assigned to Grand Rapids, October 3]
Hi, I’m Michael Petrella. Who are you? I understand that you were injured much of training camp, and for that, I’m sorry. I wish we could have gotten acquainted a little bit before the bus took off, but — much like my recent wedding — I wasn’t able to spent an hour with everyone I would have liked to. I went around to each table and said hello as best I could… but you must be one of the few that was in the potty when I arrived at your assigned dinner seat. Next time! Another thing I’ve learned since the wedding — writing your thank you note will be insanely difficult if you weren’t there. But it’s totally in the mail. Just sayin’…

46 Jamie Johnon [assigned to Grand Rapids, September 30]
Much like Minard, who Johnson apparently runs in a pack with, I wasn’t able to get much of a look at him at all. He’s wearing Kindl’s old number, so I noticed when he was behind the opponent’s net thinking “what the hell is Amazon doing back there,” but, alas, ’twas not Amazon ‘tall.

47 Brent Raedeke [assigned to Grand Rapids, September 30]
I bet he plays in the NHL. Maybe not as a regular, but he has that “where’d he come from” feel about him that call-ups from the Red Wings always seem to have. I don’t think he gets the call this year, but I wouldn’t be surprised in the least to see him make a case for himself in the coming off-seasons.

48 Cory Emmerton [assigned to rand Rapids, October 3]
Like Raedeke, I bet Emmerton gets in some games. The difference it…it might be this season. Obviously, I’m not privy to the conversations that take place among the Wings brass (…yet), but I get the feeling that Emmerton has — for the first time, in earnest — made the decision to cut him a difficult one. He clearly isn’t a Top 14 forwards kind of guy just yet, but he’s making a name for himself and proving that the Wings patience and efforts have paid off, and that he’ll be a contributor in the organization on some level for a long, long time.

51 Valtteri Filppula
Sadly, the second line wasn’t able to get a lot of minutes together, thanks to Todd Bertuzzi’s sore back and Johan Franzen’s charley horse, but I’m not worried about Filppula. Here’s hoping he can launch himself into another dimension in the same fashion that Franzen did a few seasons ago.

52 Jonathan Ericsson
Babbles must see something I don’t, because I’m pretty positive that Jonathan Ericsson is the worst player on the team. In that game against the Maple Leafs — where only four regulars dressed on a squad full of Griffins — he was STILL the weak link on defense. Anyone that’s been around TPL since the beginning knows that I wasn’t even sold on him during that “amazing playoff season” he had a few seasons back. He’s somehow gotten worse — steadily — since. At this rate, I give it to Week 2 before he’s occupying the press box and Kindl’s in his spot.

54 Sebastien Piche [assigned to Grand Rapids, September 29]
Does anyone else want to yell BASTIAN! and really wish for a luck dragon when they see this kid’s name?

59 Francis Pare [assigned to Grand Rapids, October 3]
I’ve got a soft spot for Frankie “Don’t Call me Frankie” Pare. He’s a tiny, undrafted little spitfire. If he was a deigo and not so obviously French, you’d confuse him with a young Michael Petrella. With two working knees.

60 Trevor Parkes [signed to deal, returned to Juniors, September 29]
I know we said we wouldn’t mention the Juniors guys, but Parkes is someone worth mentioning. He wasn’t 100% healthy, but the Wings thought enough of his play during the prospect tournament to offer him a contract — making him the latest in a series of “bonus draft picks” invited to camp and signed to a deal.

61 Marc Zanetti [returned to Juniors, September 20]
Again, apologies for the Juniors — but I thought for sure that Zanetti would get inked as well, based on everyone’s thoughts about him from camp. He has not been signed, but perhaps they pull a Pare — who was signed by Grand Rapids for a year before Detroit got him inked…

62 Joakim Andersson [assigned to Grand Rapids, October 3]
It seemed like every time I heard his name, it was connected to a qualifier: “Big Swedish Joakim Andersson,” much like the way that Ryan Kesler’s actual, legal name is “Livonia native Ryan Kesler.” Andersson seemed to get involved quite a bit — for better, and sometimes for worse — and if he can gut it out in Grand Rapids for a while (I’m looking at you, Hat Trick Dick), he might be a Red Wing before too long.

68 Sergei Kolosov [assigned to Grand Rapids, September 29]
Gotta feel like he’s been totally leapfrogged on the depth chart by younger, slicker guys like Brendan Smith and Brian Lashoff. Maybe I’m way off, but he was returned to Grand Rapids significantly earlier than I thought he would because A) he’s a defenseman and B) he’s been in Grand Rapids for a few seasons, compared to someone like Smith.

70 Willie Coetzee [assigned to Grand Rapids, October 3]
He’s got the fire. Obviously the Wings see it, too, as they elected to have him go to the AHL as opposed to returning him to Juniors — where he could play as an overage player this season. He’s probably a long way’s off — but as long as he keeps playing the way he did this pre-season, there’s no reason to think he’ll NEVER be a big club guy.

90 Mike Modano
Nice that he finished the pre-season off with a goal, but I would have loved — as everyone would have — if the third line got a little more time together. When all is said and done, I’m not at all concerned about Modano, and I think he’s going to deliver exactly what the Red Wings expect of him. Which may or may not be (read: is not) what certain fans expect. One quick note: he’s huge. Like huger than I thought.

93 Johan Franzen
Oh for the love of God, let his knee/thigh be alright. Also, rock the ‘stache, Mulo. The kids are depending on it.

96 Tomas Holmstrom
Having a goal disallowed in the scrimmage was poetic. Let’s hope that’s the last one that’s called back all season. /insert LaRue joke here/