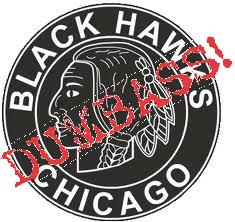 Thanks to @Whoabot, who gave me full permission to use "ASS" with association with the Blackhawks

I’m a big fan of the Mike Modano and Ruslan Salei signings. Let’s just get that out of the way right off the top. I’m very pleased with the additions of a local legend and a legit top six guy that will keep two potential defensive liabilities from being on the ice together.

You can’t hate that they’re one-year deals (both guys are over 35, which means any additional years beyond a one-year deal would be guaranteed to be held against the cap, even if they retired or were forced off the ice due to injury). Hell, even the dollar amounts were fair. Mike Modano’s salary is a very manageable $1.25M — which is a reasonable dip from the $2.25 he made a year ago (his cap hit was $3.45M, however). Ruslan Salei will be making $750,000 — more than a 77% drop from his salary in 09-10.

Where the trouble — for me — begins is with the bonuses. Of the 24 players on one-way deals this upcoming season, they are the only two with bonus clauses in their deals. The reasons, obviously, are that you may go over the salary cap on player bonuses — and, if necessary, defer “paying” them until the following season (for salary cap purposes). Only three types of players are eligible for bonuses: entry level players, players returning from major injury, and players over 35 years of age.

So, in theory, you could have a handful of players on the roster that reach all of their performance bonus benchmarks, putting the team over the $59.4M payroll allowed by the league, but not have to worry about the numbers until next summer. That’s not the case for the Red Wings, since bonuses for 35-and-over players may exceed the salary cap by 7.5% without penalty, but let’s take a look at how bonuses can affect a team in the long-term. For examples of how bonuses can jailsex the everloving bejesus out of a roster, see: Blackhawks, Chicago; 2010, Summer of.

The Blackhawks are forced to play $4.1M under the cap because of deferred payments to players. For reference, that’s a whole Johan Franzen, Milan Lucic, or Brendan Morrow. Or three Kris Drapers. Or four and a half Darren Helms.

Obviously, Tick Tock wouldn’t throw a monkey wrench into the Wings plans the way that Dale “Genius” Tallon did into Chicago’s, so as long as the bonus contracts aren’t the beginning of a slippery slope, I’ve got no beef. I’m just wary.

Modano’s $500,000 in bonuses include $150k for playing in 40 games, another $100k for playing in 55, $125k for a first round victory, and another $125k for a second round victory. Nothing too drastic in those caveats, so it stands to reason that they’ll be reached – especially the first two. I couldn’t find anything concrete about Salei’s $350k in bonuses, but will keep an eye open.

Obviously, both players in question took reduced salaries in exchange for these easily attainable performance bonus clauses. And that’s commendable. I just hope I’m not alone in praying it doesn’t become a trend in the Wings locker room. Like mentioned above, bonuses for players over 35 aren’t really the culprit, so there’s no reason to get in a twist yet. Further, the Red Wings often make entry level deals with bonus incentives on the off-chance that prospects make the NHL within those deals (like Justin Abdelkader did last year — the Wings are forced to be aware of $50,000 worth of bonuses paid to Gator due to the team’s need to use him as much as they did last season), so the team needs to be wise with who they offer bonus incentives to.

Six current prospects have bonus-laden deals. Jordan Pearce has as much chance of making the NHL as I do in the next year. Who knows where the hell Dick Axelsson will be by June. Logan Pyett and Cory Emmerton are guys that are not definite future Red Wings at all, let alone by the time their bonus deals expire (next summer).

Joakim Andersson and Tomas Tatar are the two guys that are worth watching. Their current deals, with bonuses attached, are in play until 2013. The best part? The absolute most they could make — bonuses included — is $875,000. Fucking brilliant.

On the other end of that spectrum is — SURPRISE! — the Chicago Blackhawks. They have eleven guys currently under contract that are bonus eligible, many of them prospects that aren’t close to the big squad (I assume… I don’t care enough to study them all). Guys like Nick Leddy, however, will instantly cost the team $1.4M in cap space as soon as they’re Big Boy Blackhawks. Wah wahhh.

So, I guess the moral of the story is — as long as players don’t begin to expect deferred-money deals, there’s definitely no harm in offering bonuses to the 35+ crowd (since they’re not deferred anyway). The way that the Red Wings bring along their prospects, there’s no reason to assume that their draft picks will demand such things, and even if they do — rest assured they’ll likely live out their bonus-incentive contracts in Grand Rapids. Even Brendan Smith, the most likely “kid” to make the jump to the NHL before his AHL eligibility is up, doesn’t have bonuses built into his entry-level deal, meaning he’ll make $875k flat — and Wings fans don’t need a separate spreadsheet to forecast the future cap.

1 thought on “The Problem with Bonii”