Mac and Claude on OTR 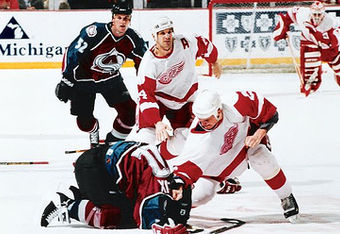 I know it’ll pain some Red Wings fans to see Claude Lemieux and Darren McCarty shake hands during this interview, but these videos are a must-watch for any hockey fan. Canadians sports talk show Off the Record landed both guys — their first ever meeting off the ice — and didn’t hold back, asking questions about turtling, sticking up for teammates, and even admiration for one kicking the everloving shit out of the other.

It’s in three parts, big time thanks to Daywalk3r and HockeyWebCast for getting the entire segment online for all of us south of the border to enjoy.

They’re both refreshingly blunt and open. Claude Lemieux fully admits to taking cheap shots against the Wings (particularly against Kozlov, which probably started the whole thing for real). Darren McCarty says he absolutely hated Lemieux, but would have stood up for him if they were teammates, too. Mac makes it clear that it was more than hockey — it was personal, since he and Draper are best friends and he was the one carrying Draper’s pliers around to loosen his jaw wires when he’d eat. Incredible insight into the whole thing.

The conversation transcends the rivalry, as they get into respect among hockey players today, and retribution in the form of illegal hits. A valuable conversation with two guys that defined old-time hockey in a transitional period into the present that seems to have lost that on-ice respect and protection which is nearly gone.

They seem to play nice, but I’ve seen McCarty on Versus. He is still a little uneasy around Claude Lemieux, and — while totally honest — seems to be biting his tongue just a little bit.

8 thoughts on “Mac and Claude on OTR”