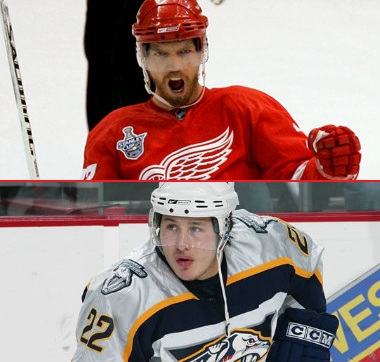 Well, the Red Wings promised they were going to be active on July 1st. We were all expecting Ryan Suter and/or Zach Parise, but it looks like they’ll be delaying their decisions to tomorrow. On the heels of the Gustavsson and Brunner signings, Detroit has also announced two more free agent deals.

Former Red Wing Mikael Samuelsson returns to the fold (for some reason) for two years at $3M each. His deal also includes a full no-trade clause.

Former Nashville Predator agitator Jordin Tootoo has latched on for three years at $1.9M each.

The signings, including Brunner, give the Red Wings fifteen forwards under contract. Justin Abdelkader, who is a restricted free agent, would make sixteen — which is far too many. Ken Holland’s gotta be cooking something up involving some of the bottom six players, which are now in great abundance in Detroit. Perhaps a trade is in the works? Stay tuned.