#23 Gets His Wish: Stuart Traded to SJ 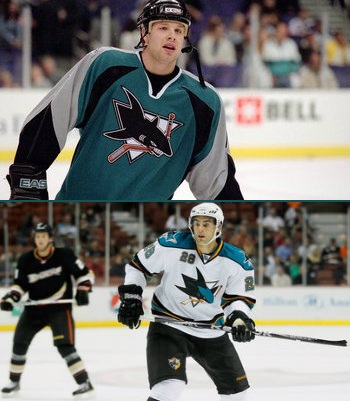 Once and former Sharks: Stuart goes back to the Bay for Murray

Well, the inevitable has happened. Defenseman Brad Stuart, who has been a mainstay on the blueline since his acquisition in 2008, has been traded to the San Jose Sharks in exchange for Andrew Murray and a conditional seventh round draft pick in 2014.

Andrew Murray is a thirty-year-old forward who has played 220 games in the NHL, most of them with the Columbus Blue Jackets. He played four seasons at Bemidji State and three in Syracuse of the AHL before making his break into the League with the team that drafted him in the 8th round of the 2001 NHL Draft (that Draft was a pretty big bust for the Wings — only Dmitri Bykov played an NHL game for them, and he only lasted a season; goalie Drew MacIntyre played four games for Canucks and Sabres many years later).

Murray was signed to a one-way contract by the Blue Jackets, who kept him on the NHL roster for three seasons between 2008 and 2011. On July 13th of last year, San Jose signed him to a two-way deal, and he split the season between the NHL and the AHL’s Worcester Sharks. In 39 NHL games, he scored a goal and added three assists. In the 10 AHL games, he scored twice and added an assist. Chances are slim he’ll be re-signed by the Red Wings, although they are in need of filling the Griffins out for next season. If he were to earn a contract, he will very likely stay in Grand Rapids, so you may never get to see him in a Red Wings uniform.

UPDATE — According to the Detroit Free Press’ Helene St. James, Murray will NOT be signed by the Red Wings, and goes on to say that the team is “not interested” in the idea of signing him.

Brad Stuart was originally drafted by the Sharks in 1998 (3rd overall) and played in San Jose for five successful seasons. He was traded to Boston as part of a package for current Sharks captain Joe Thornton. He was traded again to the Calgary Flames when it became apparent that the Bruins wouldn’t be able to sign him long-term. At the end of that season, he went back West on a contract with the Kings — who promptly traded him to the Red Wings, where he won a Stanley Cup immediately. Four-plus seasons in Motown were enough for the man whose family stayed behind in California, and it was clear that the Wings weren’t going to be able to re-sign him, either. Instead of letting him walk on the 1st (or making it difficult for Stuart to end up where he wanted to be), general manager Ken Holland arranged a deal that gave Stuart’s preference first crack at a deal. I can’t imagine he isn’t signed by the Sharks before we get to July 1st.

Good luck to Brad Start, who was a great hockey player and a strong soldier over five seasons in Detroit. I can’t imagine the difficulty of being away from your wife and children, and hopefully he’ll be much happier being close to them.