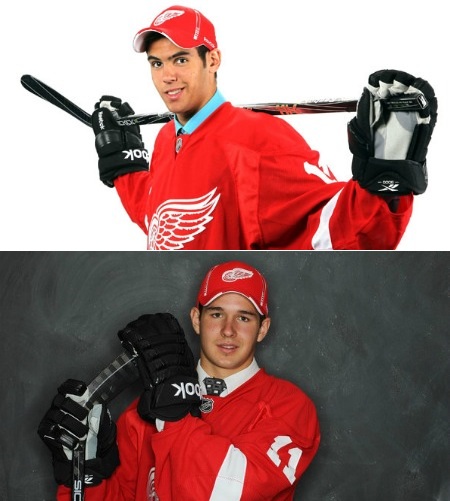 On Sunday morning, the Red Wings announced the signing of a pair of defensemen drafted this past June. Ryan Sproul, of the Sault Ste. Marie Greyhounds of the OHL, and Xavier Ouellet, of the Montreal Juniors of the QMJHL, have signed three-year entry-level deals. The team had until June of 2013 to get them under contract or lose their exclusive negotiating rights.

Thanks to a bogus Canadian Hockey League rule, players are ineligible to play in the American Hockey League until they’ve played four seasons of junior hockey or they turn twenty (by December 31st of the current season). Neither Sproul nor Ouellet are eligible to play for the Griffins until 2013-14 at the earliest. The twenty-year-old rule does not apply to the National Hockey League — if either player is able to make the Red Wings, he may be kept. However, he can’t be assigned to the Griffins until ’13-14; they would have to be returned to their junior clubs.

As a result, their three-year deals won’t take effect until a season in which they may turn pro. Like Petr Mrazek’s deal, these two deals will “slide.” Therefore, these two won’t count against the Red Wings’ 50 contract limit until they become professional hockey players.

Per club policy, financial details were not disclosed, but I’m sure it’s just a matter of time before CapGeek gets a hold of the numbers. We’ll pass them along — and add them to the Chart — when they’re verified.

Detroit, MI…The Detroit Red Wings today announced that defensemen Xavier Ouellet and Ryan Sproul have both been signed to three-year entry-level contracts. In accordance with club policy, additional terms of these deals will not be disclosed.

Ouellet, 18, has skated with the Montreal Juniors/Blainville-Boisbriand Armada (Quebec Major Junior Hockey League) franchise for the past two seasons where he has recorded 103 points (29G-74) and a rating of +43 in 130 career appearances. Selected by Detroit in the second round (48th overall) of the 2011 NHL Entry Draft, Ouellet was a member of Team Orr at the 2011 CHL Home Hardware Top Prospects Game, played at Toronto’s Air Canada Centre.

Montreal’s first choice (14th overall) at the 2009 QMJHL Entry Draft, Ouellet was named to the QMJHL All-Rookie Team in 2009-10 and represented his home province of Quebec at the 2010 World U-17 Hockey Challenge in Ontario. Currently competing in the President’s Cup Playoffs with Blainville-Boisbriand, Ouellet finished third amongst all QMJHL defensemen with 60 points (21G-39A) in 63 appearances during the 2011-12 regular season.

Detroit’s third selection (second round, 55th overall) at last summer’s NHL Entry Draft, Sproul, 19, has spent the last two seasons with the Ontario Hockey League’s Sault Ste.Marie Greyhounds where he has amassed 37G-50A-87P-89PIM in 122 games played.  The 6’4”, 185-lb. blue-liner was chosen by Sault Ste. Marie in the sixth round (108th overall) of the 2009 OHL Priority Selection Draft after enjoying a standout season with Vaughn Kings of the Greater Toronto Hockey League in 2008-09.

A native of Mississauga, ON, Sproul was a member of the Ontario Hockey’s League’s Second All-Rookie Team in 2010-11 and was named the Greyhounds’ Top Defenseman in 2011-12 after finishing tied for third amongst all OHL rearguards with 54 points (23G-31A) in 61 games.