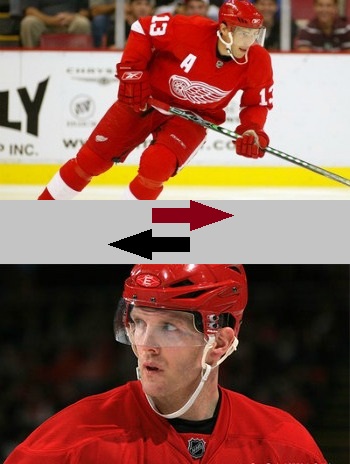 Here’s an odd, out-of-left-field story for your Tuesday afternoon: Pavel Datsyuk had minor arthroscopic surgery to remove some bone fragments removed in what was dubbed “an old thing” by coach Mike Babcock. It was done now to make sure that he’s back to 100% for the playoffs.

Datsyuk comes out of the lineup, and Dan Cleary goes back in. Cleary is expected to play tonight in Chicago after missing the last five. He twice had a cyst in his knee drained to take some pressure out of the joint — a similar situation to the one that essentially removed me from the game altogether. I also had a cyst in my knee joint — but it was wrapped around the tendons and both inside and out of the joint — and had it removed. That he’s back after five games is pretty amazing considering it took me 18 months to walk to the bathroom without pain.

The new lines look a little something like this, per Babcock:

With twelve healthy forwards, no one will be recalled for now. If it becomes apparent that Cleary isn’t in game shape, or another forward is lost to injury, the top candidates for recall are Gustav Nyquist, Chris Conner, and Tomas Tatar — who has been called up twice, but scratched at the last minute both times.

4 thoughts on “Datsyuk out two weeks, Cleary to return tonight”