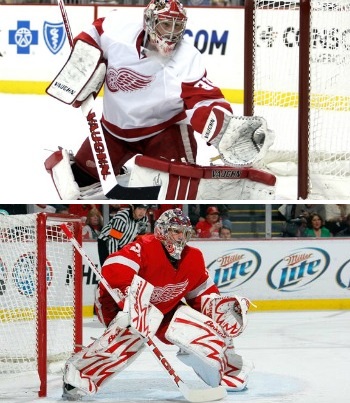 ***UPDATE, 12:04pm***
The team has made the move officially — formally waiving Ty Conklin as of noon.

The goaltending conundrum that we explored yesterday has been solved: the Detroit Red Wings have chosen to keep Joey MacDonald in Hockeytown, and waive Ty Conklin, The Production Line learned from a source within the organization late last night.

Following a string of strong play, MacDonald has become the clear-cut second string goaltender within the organization. He would not have to be waived to be sent down to the Grand Rapids Griffins, but it appears that he’s become too valuable to the big club to explore sending him to the AHL.

Ty Conklin, on the other hand, has not played well in the games that he’s been given the opportunity to prove he should be the backup goaltender to Jimmy Howard. With his waiving, other teams have until noon on Tuesday to put in a claim. If a team picks him off of the waiver wire, his contract would transfer to the new team, and the Red Wings would receive nothing in return. If no other team puts in a claim for the veteran netminder, he can be assigned to the Grand Rapids Griffins of the American Hockey League, who will have a decision to make of their own: both Jordan Pearce and Tom McCollum are currently on the roster in Grand Rapids.

With Joey MacDonald’s contract elevating to one-way status next season, the Red Wings will use the remainder of the regular season to see what may be the goaltending tandem for 2012-13.

The Production Line wishes Ty Conklin nothing but the best in Grand Rapids, and sincerely hope that he can bounce back from a tough season to secure employment for next season. A quick aside: a few weeks ago, after Joey MacDonald started a few games for the Wings and was running low on sticks, licensed pilot Ty Conklin flew him to Grand Rapids to pick up a few extras. Speaks to the character of a man like Conklin to go out of his way to help a teammate, even one that may be taking your job.

Likewise, congratulations to Joey MacDonald, the newest full-time Detroit Red Wing, who has more than earned his shot over the last two seasons.