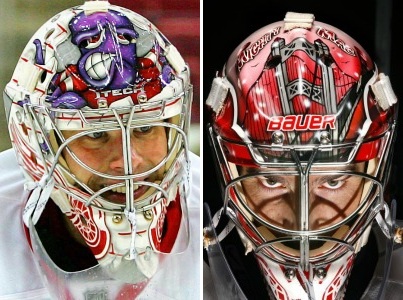 On February 2nd, Jimmy Howard suffered a broken finger against the Vancouver Canucks. He finished the game, earning his league-leading 32nd win on the year. Nothing was mentioned during the broadcast regarding the injury, but Joey MacDonald was called up the next morning, and flown out to meet the team in Edmonton.

Ty Conklin, who has played poorly all season, got the start in Edmonton and lasted exactly one period. Joey MacDonald took over and hasn’t looked back. He started seven games in a row, winning the final six — including the NHL record-tying 21st in a row at the Joe, not to mention the 22nd and 23rd this afternoon.

With Jimmy Howard set to return Tuesday night in Chicago… it’s decision time. Do the Wings demote Joey MacDonald, allowing him to play some games in Grand Rapids — or waive Ty Conklin, who has proven ineffective time and time again?

SCENARIO A :: JOEY MACDONALD GOES DOWN
Joey MacDonald cleared waivers at the beginning of the season. As a result, he wouldn’t have to clear waivers again until after playing ten games or thirty days on the NHL roster. He’s played in 8, and has only been up from the AHL for 16 days, so he could go back down to the Griffins without any risk of losing him to another team that’s also noticed his hot streak.

I think it’s fair to say that the Red Wings have found their #2 goaltender for the playoffs, when the best players will dress no matter what. But perhaps Ken Holland and Company are thinking that they’d rather have Joey get in a few games in Grand Rapids (as opposed to sitting on the bench while Howard plays — because Howard plays an awful lot). But Matt Saler makes a good point: having missed time earlier this season with a concussion, playing in the minors increases the chance that MacDonald could get run over and re-injured… and it also opens him up to the farm clubs of teams that the Wings might have to play in the post-season.

Sending MacDonald down to Grand Rapids would be painless to the team as a whole. Nothing would be lost, aside from — maybe — MacDonald’s confidence. Taking a risk like waiving Ty Conklin (not that anyone would claim him) is against the Red Wings’ management mantra of stockpiling NHL talent and letting the chips fall where they most obviously may.

However, one could argue that Joey MacDonald has earned his NHL dollars. He’s on a two-way contract this year (but not next year — more on that in a minute), meaning he’s paid $2,973 for every day that he’s on the NHL roster. Compare that to what he earns in the AHL: $568.

SCENARIO B :: WAIVE TY CONKLIN
As mentioned above, it’s not generally how the Red Wings operate — waiving a veteran player that’s been given a contract to play in the NHL this season. The team prides itself (and sells itself to other veterans in the off-season) as being universally loyal to their players, and Ty Conklin is one of their players.

By all accounts, Conklin is a great teammate, a great man, and a great influence during practice. Also by all accounts, however, is that Ty Conklin has been one of the worst goaltenders in the National Hockey League this season, after playing so well in his first go-round with the Wings.

Conklin cannot be assigned to the Grand Rapids Griffins without first being exposed to the rest of the league on the waiver wire. Speculation arose during the Red Wings game that the Wings were going to waive Conklin tomorrow morning. When a player is waived, the other 29 teams have 24 hours to put in a claim for his services and take over his contract. It’s doubtful that any team would put in a claim for Conklin, but it’s a risk that doesn’t need to be taken.

If (when) Conklin clears waivers on Tuesday (or whenever), he could be assigned to Grand Rapids, where he’d improve their goaltending situation and would be able to regain some of the confidence it’s clear that he’s lost over the course of the season in the NHL. But losing a player for nothing isn’t the Red Wings way, most of the time, especially when it’s possible to avoid.

BUT WAIT, THERE’S MORE…
Joey MacDonald is on a two-way contract this season, but it elevates to a one-way next season. What that means is he’d be paid the same paycheck regardless of where he’s playing — Detroit or Grand Rapids. What it also means is that since he will be making more than the AHL maximum of $105,000, he’d be subjected to re-entry waivers should the need arise for his services in the NHL.

It happened last season with Derek Meech. He cleared waivers at the beginning of the season, but when the need arose for a defenseman, he was passed over because the Wings didn’t want to expose him to re-entry waivers. If a player is claimed on re-entry waivers, the Wings would still be responsible for 50% of his salary (and cap hit) without the use of the player.

Has MacDonald played well enough to earn himself the backup role full-time next season? Some of us thought he played well enough last season to earn that right for this year, but it’s never a bad thing having more NHL-caliber competition for any roster spot, but particularly in the crease.

If the Wings treat the rest of this season like an extended audition for Joey MacDonald to be the backup, and send Conklin down, it might be a calculated risk to look into the crystal ball. Is that alone worth the risk of waiving Conklin? When coupled with the fact that he hasn’t played well enough to earn a good look, then maybe… but there are a lot of teams looking to improve their goaltending.

SO WHAT’S GOING TO HAPPEN?
The decision will have to come soon — I’m certain that all three goaltenders won’t be traveling to Chicago, although there’s no real reason they couldn’t. The Wings aren’t at the roster limit, considering that Dan Cleary and Patrick Eaves are on short-term IR (meaning their roster spot is made available). So they could carry all three with them, but why draw this out any further? We’ll let you know as soon as the Red Wings make an announcement one way or another. Stay tuned…

3 thoughts on “Judgment Day: the Goaltenders”