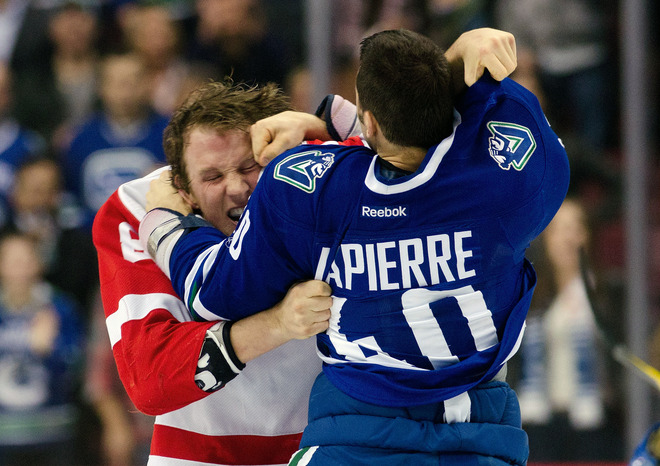 NOOGIE! Playing the role of the Vancouver Canucks in this photo is Justin Abdelkader

THE RUNDOWN
More Jekyll and Hyde hockey from the Detroit Red Wings. The first half of the first period was all Wings — the second half, all Canucks. The Wings were flat-out dominant for much of the first stanza, but the talented Canucks were able to keep it even heading into the break. The second period started much like the first: all Red Wings, including two solid minutes in the offensive zone to start the frame. It was 13+ minutes of “Red Wings hockey with special guests the Canucks,” and the good guys were able to take a well-deserved lead into the locker room. Through those first two periods, the Red Wings directed 53 shots at the net (only 30 reached it, but still… that’s a shit ton).

And then the third period happened. Detroit failed to register a shot in the first ten minutes of it, and Vancouver took advantage of an errant puck in between the dots to tie it at 2… it looked scary. But Detroit found a way to pry another goal out of the stingy Vancouver defense of the third period, and re-take the lead. It wouldn’t last — Vancouver found another gear and tied the game with 4:24 left in the game. We’d head into overtime… and then the shootout, where the Wings are suddenly invincible.

DISCH APPROVED “HORSECOP” OF THE GAME
Jiri Hudler had a goal in regulation, and the winner in the shootout. Shout-out to Jimmy Howard, who has stopped 14/16 shootout attempts this season. Nasty.

THE RIGGY “SHITBOX” OF THE GAME
Johan Franzen. This was a game that The Mule should have been able to dictate the pace of. Instead, whenever he had the puck, he was lumbering and doing very little to aid the Wings in the way that we know he can.

WHAT’S NEXT
The Wings have the Oilers on Saturday night.