Dry your eyes, Eddie — Bertuzzi’s got a hanky for you. 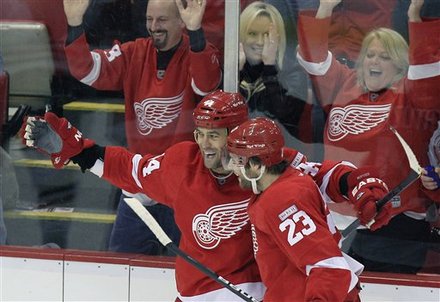 THE RUNDOWN
Third meeting of the season between Wings and Hawks. Third time it was a 3-2 final. But it was the half-toothed murderer who ended this one. After missing the last game with an undisclosed injury, Todd Bertuzzi Kool-Aid manned his way through the Joe Louis doors and said, “I GOT THIS.”

DISCH APPROVED “HORSECOP” OF THE GAME
Todd Bertuzzi. A game-time decision turns into a two-goal day.

THE RIGGY “SHITBOX” OF THE GAME
I’m going to go with Ericsson here, and here’s why: at one point in the second period — despite all the trouble Howard was having playing the puck — he gestured to Tiberius like “come on, get the puck to me up the ice!” which he then carried TOWARD Howard and promptly iced. Mix in a little “ill-advised penalty right after the Hawks found some life,” and you have quintessential Shitbox.

WHAT’S NEXT
The Wings welcome Buffalo to the Joe on Monday. I’ll be on the ice for practice, so one of the other fellas should have your pre-game.

3 thoughts on “Dry your eyes, Eddie — Bertuzzi’s got a hanky for you.”