This Time John Wayne Does Not Walk Off Into the Sunset With Grace Kelly:Wings Beat Predators 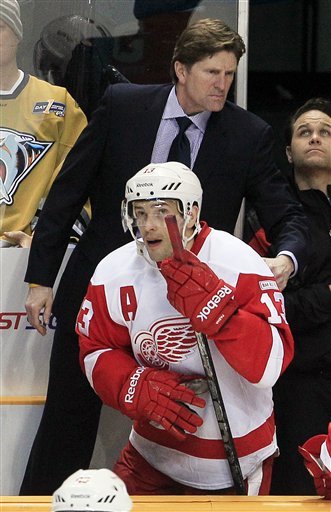 THE RUNDOWN
I was watching the game while working, so my observations are sporadic, but the Wings looked good tonight. Real good. They finally potted a win on the road, against a team who notoriously gives us trouble. Cleary, in his post game interview, attributed at least partially to the absence of Weber. Whatever it was, the Wings looked strong from what I saw.

Your goal scorers were Filppula (twice), Datsyuk, and Cleary. Filppula’s first came from Zetterberg capitalizing on a turnover, and gives a great pass up to Filppula all alone in the slot. Datsyuk’s was a wraparound that he called before the referees did, and that had to be reviewed in Toronto. Cleary’s technically came 13 seconds after the Datsyuk goal. That goal I think was a bit of a backbreaker, and Filppula’s goal was icing on the cake. He was presented with a completely open net after some dirty work around the goal by Abdelkader and Emmerton.

The only Nashville goal came late in the 3rd. Blum flung a wobbly puck in, that Jimmy just didn’t see in time. Otherwise, Howard had an excellent game, as usual, and the Wings prevented Nashville from scoring on the power play, who entered the game with the league’s second best power play.

In other small notes, Darren Helm played with some gnarly stitches after taking a puck to the face in the pregame skate, and Holmstrom left the bench in the third, which has now been evaluated as a lower body injury. Hopefully its nothing serious and we’ll get our net crasher back soon.

RIGGY SHITBOX OF THE GAME
Hard to decide, but I’m giving it to Ericsson. It’s practically tradition.

The Wings play St. Louis tomorrow at 7:30 EST, at the Joe. I think one of the gents have pregame tomorrow, so rejoice! You shall be free of me and back in the capable hands of Petrella, Discher, and Hollis soon.