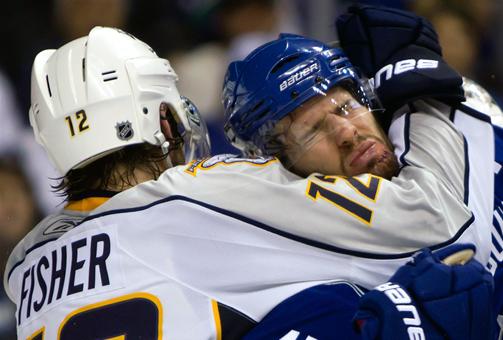 Even Mr. Underwood knows how to send a physical message...

THE RUNDOWN
We all give Mike Babcock alot of grief around here for using the same tired quotes when the Wings take one solidly on the chin. So then it’s extra fitting that when watching the first period of the shitshow in Vancouver, the first thing that pops into my head is an animated .gif of Mike Babcock saying “We didn’t get started on time.” Fuck me. Babbles has won. He’s got control of my mind and there’s nothing I can do about it.

Well, the proof was certainly in the pudding tonight as the Wings surrendered two goals in quick fashion, answered back, and then gift wrapped another two goal lead with a fierce and lethal combination of lazy play, poor positioning and a general lack of anything resembling interest in competing. Sure, the shots will tell a different story, but the moral remains the same: dig a hole against a good team and good luck getting out of it.

The most frustrating part about tonight isn’t the fact that the Wings failed to show up and play in the first period. This isn’t the first time they’ve been disinterested in playing hockey and it certainly won’t be the last. No, in a game that Mickey Redmond would have called a “throwaway” if he wasn’t at home asleep in his bed, the part that keeps me from just wastebasketing the Wings effort is Jimmy Howard. Not his play between the pipes, mind you. No, it’s the fact that he’s the toughest enforcer the Wings have on their squad, which is one hell of a travesty. Nobody else steps up after the whistle for a little extra fun. Nobody else cares enough to facewash a guy and then sock him in his jaw. No, the only guy willing to do that is Howard and it’s a total fucking embarrassment. What’s worse, nobody even sticks up for HIM. When Hansen laid his hands on Howard after the fourth goal, someone – ANYONE – should have been right there putting five fingers in Hansen’s face. Instead, Howard gets mobbed by three guys before Lidstrom can come over and ask everyone to politely step away from James and return to the match.I get it. Lidstrom’s not an enforcer. But who is? Who’s the guy the Wings have that will goon it up after a play and make sure that it’s understood that liberties won’t be taken? Who’s the guy that horsecollars Livonia Native Ryan Kesler after he spends half of the third period treating Valtteri Filppula like his red-headed stepchild?

THAT’S what’s disturbing about the game tonight. A loss to a good team with a hot goaltender is nothing to be ashamed about. What is shameful is when a team fails to use it as an opportunity to send a message for the next time around. You can bet the Canucks will continue to agitate the Wings in their last two matchups of the season. The real question is who’s going to stop them?

HORSECOP OF THE GAME
Jimmy Howard. For having a pair. Drew Miller gets honorable mention for scoring yet again.

RIGGY SHITBOX OF THE GAME
Justin Abdelkader. What happened to that tough guy image he was working on? Look kid, if you’re not going to score or contribute on the scoresheet, get out there and stand up for your teammates by knocking someone’s head in. 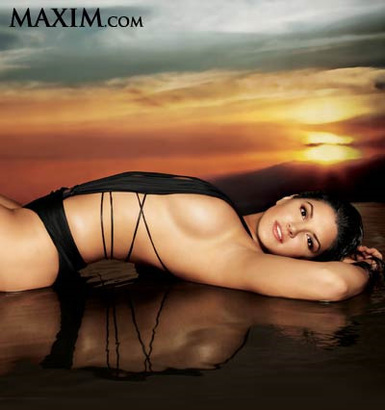 Gina Carano is an MMA fighter. And a former American Gladiator (AWESOME). Let’s get her some skates.