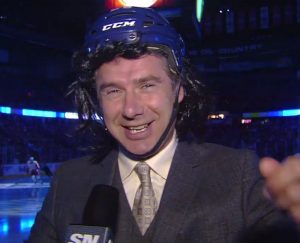 THE RUNDOWN
It sure as hell wasn’t pretty, which makes the ending even more fitting. The Captain unleashes a blast, Miller re-directs it and Dan Cleary winds up on his ass on the ice. That’s the kind of Red Wings hockey I like to see. I’m willing to look past the slow, sluggish play in the first two periods and realize that the Wings gutted out a tough road win against a team looking to avoid a four game skid, which is most definitely not something to sneeze at. Perhaps more refreshing, though, was to see the Wings really buy in to the coaching system, even when their legs weren’t answering the bell. They stayed patient and trusted the game the coaches called for, and it paid off late in the third with Salt n’ Peppa’s crippling changeup from Lidstrom’s stick. I mentioned it before the game, but playing in Edmonton gets me on edge. Tonight was no different, which is why I’m happy to see the guys get on the bus and take their pair of points straight out of Edmonton.

It’s late, so we’ll eschew the bullets and get right to the good stuff.

HORSECOP OF THE GAME
Drew Miller. He’s been kryptonite to the Oil so far this year, scoring the game winner in each of the first two meetings. Really loving his play and his work ethic right now, and homeboy is earning every dollar the Wings are paying him. Awesome stuff.

RIGGY SHITBOX OF THE GAME
The Rig. Gets caught pinching to spring that hippie Ryan Jones on the first goal, and then takes a penalty that leads to a power play goal for Edmonton right before the end of the second. Just an all around waste of space tonight (SURPRISE!).