Eaves to IR, Conner called up 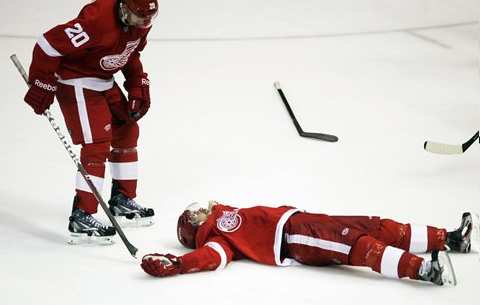 On Saturday, Red Wings winger Patrick Eaves took an errant shot just above the right ear. It was a scary scene as Eaves went down in a heap, appeared to lose consciousness for just a second, before writhing in pain on the ice. He was able to get himself onto a gurney — for the most part — and be taken to the hospital, where he was held overnight for observation after confirming that his jaw was fractured by the Roman Josi shot that likely ramped up a stick. After a successful surgery where his jaw was wired shut, it was determined that he will miss the next six to eight weeks.

Despite being ruled out until mid-January, Eaves had not been placed on injured reserve.

Until just now. According to a team official, Eaves has been removed from the active roster, and added to the short-term injured reserve list, joining Jan Mursak who is on LTIR (he’s set to return from a broken ankle at the end of December). Players placed on STIR must miss seven days, but Eaves will not be physically able to perform for at least twenty-five games, according to the timeline.

With Eaves coming off of the roster, the team is back down to 22 active players. The team has also announced that they’ve recalled Chris Conner from the Grand Rapids Griffins.

The Griffins leading scorer is the veteran pro and Michigan native. He has 7 goals and 16 points in 20 games, good enough for sixth in AHL scoring. Conner played 60 games with the Penguins last season, netting 7 goals and 9 assists. In total, he’s played 139 games in the NHL and was signed this past July for depth and in case the Wings needed a solid pro during the season.

It appears that time is now. Conner will be eligible to suit up for the Red Wings on Friday evening, when they take on the Sabres. The team must be really unhappy with Fabian Brunnstrom’s performance tonight… discuss.

6 thoughts on “Eaves to IR, Conner called up”