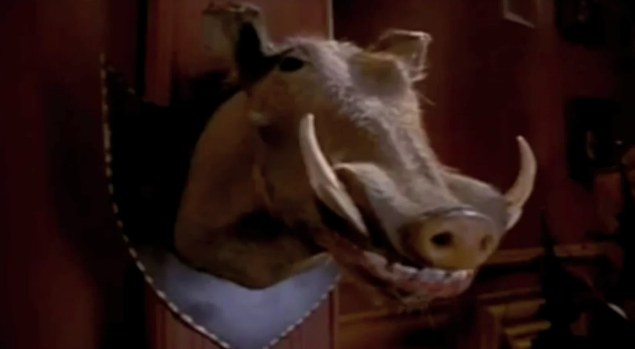 Anze Kopitar makes a little-known cameo in George Harrison's video for Got My Mind Set On You. Get it? Because he's ugly as fuck.

BLOW AWAY
The Red Wings stumble 340 miles south after being embarrassed by the Sharks in “The Tank” to face another California-based foe. This time, it’s the Kings at 4pm Eastern, and the game will be featured on NHL Network, so get ready to bitch that it’s blacked out on your Game Center Live.

WAKE UP, MY LOVE
:: Detroit crapped the bed on Thursday, dropping a 5-2 decision to the San Jose Sharks. But we met Hope Dworaczyk, so it wasn’t all bad (yes it was).
:: Los Angeles also played on Saturday, but they found a way to beat Anaheim 5-3.
:: This is the first meeting between Detroit and LA this season. The last time they met was the game before H2H2 on March 9th. The Wings lost that one 2-1, with Howard in net — Darren Helm was your lone goal scorer.

I’D HAVE YOU ANYTIME
There are no former Wings playing in Los Angeles, which is rare considering how much the Wings and Kings like to deal.

But no one else, for sure.

The TPL Name Game “Three Stars”
Just like last season, submit your nickname suggestions (follow the theme!), and we’ll use our Facebook page to allow people to vote for the best… the winner gets a free TPL t-shirt!
PETRELLA: Jiri “It’s Gonna Take Money… A WHOLE Lotta Spendin’ Money” Hudler
HOLLIS: Henrik “It’s Gonna Take Patience and Time Mmmm To Do It To Do It To Do It” Zetterberg
DISCH: Jonathan “I Got My Mind Set On You” Ericsson (submitted on behalf of TPL Mom)
STEVIE: Johan “If I Put My Mind To It, I Know That I Really Can Do It” Franzen

WHEN WE WAS FAB
:: James Tiberius is in the net for his eleventh start in a row. Ty Conklin got a period of mop-up duty in San Jose. It wasn’t pretty. It’s pretty clear that Howard is going to be “the guy” for the foreseeable future, and I’m beginning to wonder if that cameo in the Sharks game was Coach Babcock taking a peek at Conklin to see if he steps up like he did in ’08-’09 as a member of the Wings. There aren’t a whole lot of options — Griffins starter Joey MacDonald is out with a concussion, and the list of unsigned NHL netminders include (wait for it) Marty Turco and Pascal Leclaire. It’s Howard or Bust in ’12.
:: Rookie Brendan Smith will play for the second game in a row, hoping to build off of his debut from two nights ago. He showed flashes of respectability on the blueline (playing nearly 20 minutes), but there’s a lot to learn there. I can’t help but wonder if this road trip against tough teams like the Sharks and Kings is the appropriate time to let him get his feet wet.
:: Of course, Smith in the lineup banishes Mike Commodore to the Leino Lounge, begging the question… “what the hell is he even doing on this team then?” Commodore has gotten into three games so far this season, playing under 31 minutes. Brendan Smith should surpass that amount in the second period today.
:: Hollis did a fantastic job of directing focus squarely on the captains of this team for the troubles. Guys like defensemen Nicklas Lidstrom and Niklas Kronwall (who are contributing on the score sheet… at least) and forwards Henrik Zetterberg and Pavel Datsyuk (who have been largely invisible all season) should be the guys to throw shit in the locker room, if that’s what needs to be done. There’s no fire, and as much as we’d like to think it’s fixable, something has to be the catalyst. If the Wings can’t get out of California with a few wins under their belt, I wouldn’t be surprised in the least to see a trade. Yeah, I said it.
:: After a one-game honeymoon on the top line, Justin Abdelkader is back down in a grinding role — where he excels. Todd Bertuzzi is a gametime decision to return after missing the last six games with dizziness associated with a swollen inner ear, courtesy of a high stick from Minnesota’s Devin Setoguchi. If he’s able to return, he’ll be activated from short-term injured reserve and Ian White will be placed on STIR to clear a roster spot.