Net Flicks Down the Quickster (PUNS!) 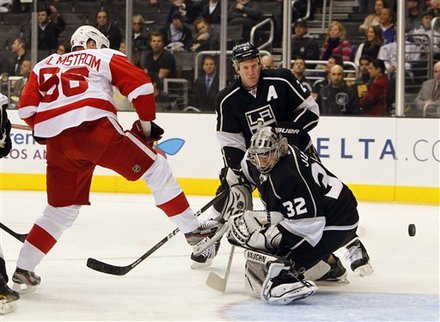 I also reserved the right to use the headline "Quick Start Negates Quick's Start" but the Wings needed the second period to get rolling.

The Skinny
A very strong second period proved to be the difference-maker as the Red Wings ended their two-game slide, earning their first points of the road trip. They’ll have to hope their legs don’t seize up in the next twenty-four hours, since they’ll have to do it again in Anaheim, and this was — for the most part — the kind of complete effort they’ll need to remember over the next 64 games. They scored two power-play goals (but allowed a shorthanded goal), and killed all of their penalties (including a late-game 5-on-3) — a marked improvement over the last few weeks for a team that ranks in the bottom half of both of those statistics.

The Disch Approved “Horsecop” of the Game
I was tempted to take Darren Helm, who was an absolute madman on the kill as well as at even strength, but Pavel Datsyuk made a statement today and that statement was “I’m tired of this losing bullshit, and Hollis made me realize it’s my responsibility to do something about it.” He refused anything less than an equalizer following that shorthanded goal against, and added an insurance goal in the third.

The Riggy “Shitbox” of the Game
Until he proves otherwise, this slot may default to Henrik Zetterberg. The other supposed leaders of the team played angry today (Datsyuk and Kronwall each had goals, Franzen had an assist and was buzzing around the net, Lidstrom was strong defensively and added an assist), but Z went goose egg again and you may not have known he was on the ice aside from playing center during the shorthanded goal against. The boxscore tells me he had 7 shots on goal, but I don’t remember a single one of them.

Point Pace :: The Wings are on pace for 95 points. Last season, 97 was the playoff cutoff.

What’s Next?
Quick turnaround, as the Wings play the Ducks in twenty-four short hours. I’ve got your pre-game again.

5 thoughts on “Net Flicks Down the Quickster (PUNS!)”