Tale of the Tape: Playing the Tendencies

In the previous TOTT, I spent the better part of an entire post picking apart Johan Franzen for his lack of positioning and hustle on a power play opportunity against Minnesota. While the Wings ended up scoring right after that penalty, I still felt Franzen’s lack of effort took away from a scoring chance, all because he recognized the play and failed to do his job: get in position to score. Of course, The Mule is now on a tear and fresh off providing you some curly fries, so order seems to be restored in the universe.

That’s not why we are here, however. In fact, today I want to highlight the other side of the coin: a guy getting himself into position to make a play all based on the split-second reaction after reading the puck and his teammate. Who gets the gold medal today? One Henrik Zetterberg.

You may recognize the following play as the Wings first goal in last night’s tilt. As I mentioned, though, we’re here to talk about Henrik Zetterberg and not the guy who ultimately scores the goal, Nicklas Lidstrom (although, he did his usual fantastic job reading the play and potting the puck.) If you recall, this play starts when Zetterberg carries the puck up the nearside wall and does his patented “alley-oop” dump into the opposite corner. Usually, the opposite forward will head in and cycle the puck back along the end boards to the pressing Hank, who then has a clear lane to find someone in the slot, but the beauty of the cross-ice dump-in is that there are plenty of opportunities to make something happen. On this occasion, Franzen is the chasing forward, and decides to backhand one on net. Varlamov makes a save, and the puck heads on a return trajectory to the far corner, where Colorado looks to clear: 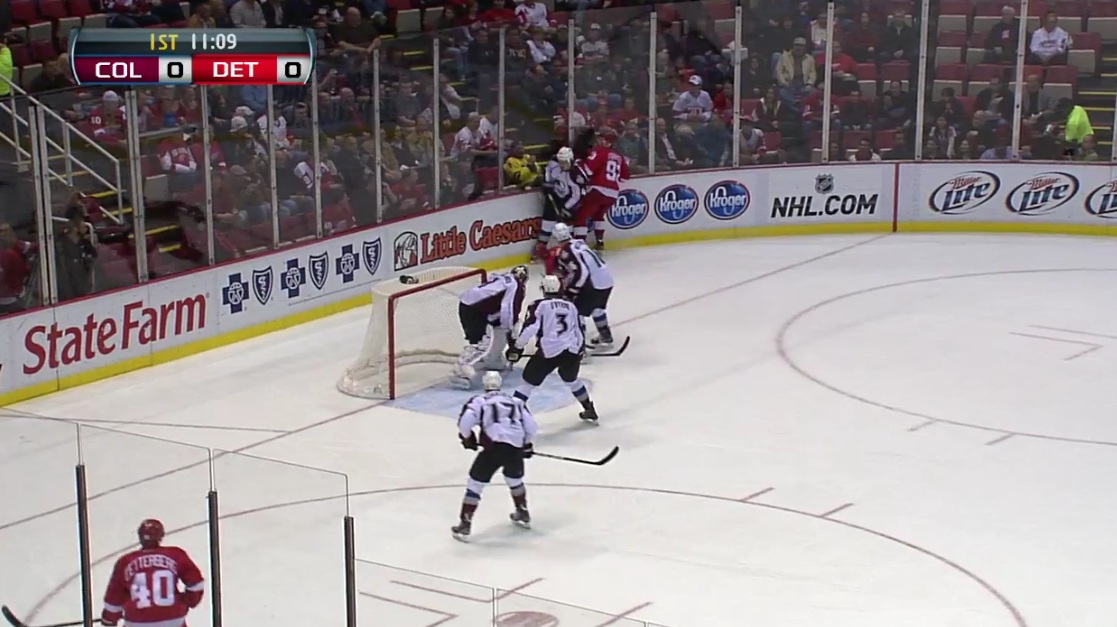 As you can see, Franzen is forechecking his guy, which leads to him falling down on the clearing attempt and putting the puck right on Lidstrom’s stick in the slot. Meanwhile, Zetterberg is creeping up the near boards, looking for either a backhander around the end boards on an attempted clear, or an opportunity to get to the net should the puck squirt back out in front. When the Avs lob a weak one toward the slot, look who’s already making his move toward the net:

This is where Zetterberg’s vast wealth of knowledge and playing experience take over. As he sees the puck rolling out to no-man’s-land, he immediately recognizes that Lidstrom is going to make a play on the puck, whether it be shot or pass: 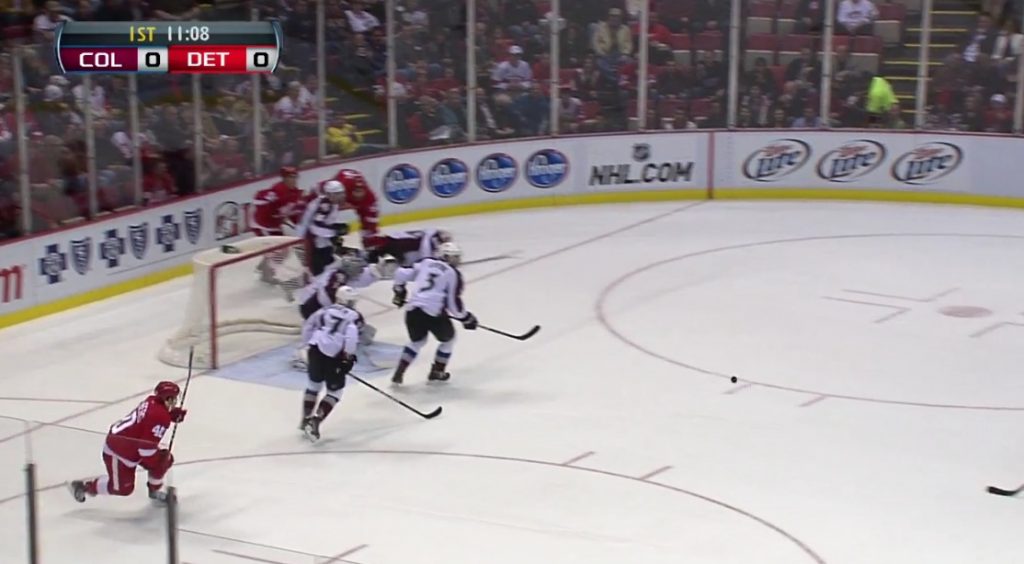 Instead of continuing on his current line and playing the projected path of the puck, Hank hits the breaks and finds the soft zone behind the rotating defenders: 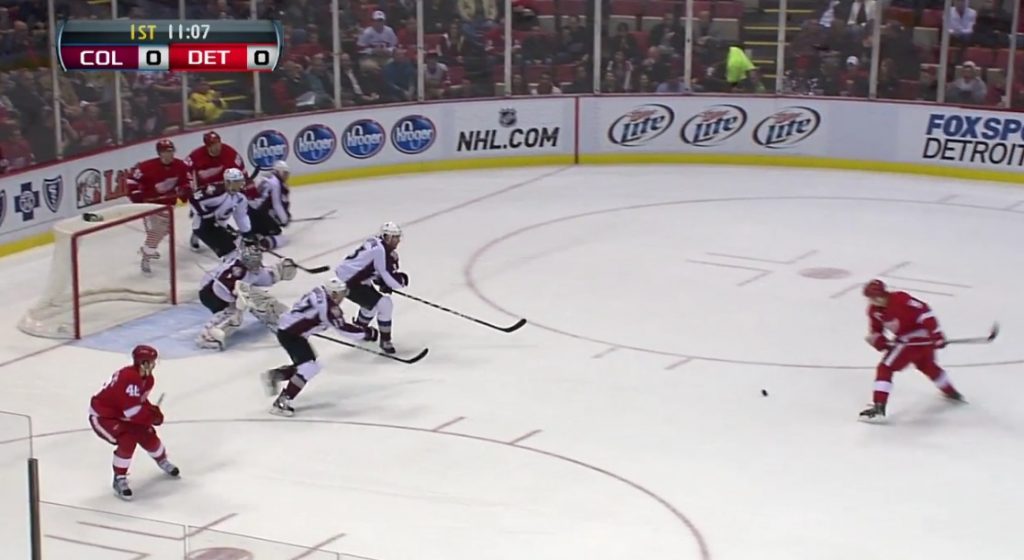 This is an important read for a number of reasons. First, the defenders are moving away from him, while Varlamov is moving TOWARD him. If Lidstrom continues his shot toward the blocker side (which he will) and Varlamov makes the save (which he won’t), the odds are good that a rebound is coming out somewhere in the area that Hank currently occupies. Secondly, Lidstrom now has an alternative option in that he can fake shot and slap pass to Hank should he choose that route, as the Avs are in no position to properly defend the potential of shot and pass: 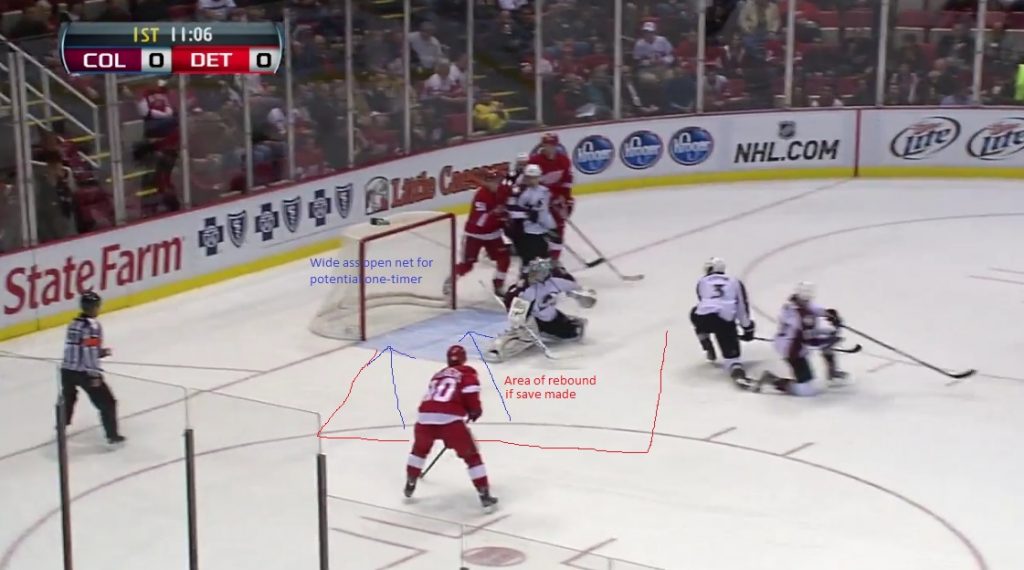 In the end, it doesn’t matter. Lidstrom buries it and the Wings can celebrate a 1-0 lead. What’s important, though, is that Zetterberg makes the right read and course-corrects in a split second based on Lidstrom’s positioning on the puck. If Hank pulls a Mule and continues cruising toward the puck or through the slot and a juicy rebound comes out, nobody’s home. Instead, the red flags go up and the brakes come on, leaving multiple scoring opportunities for one of the game’s smartest players. Good shit.