One of the things I like to do after a game is take some time to re-watch a number of plays that are listed in one of the many spiral notebooks littered on my desk at work and coffee table at home, and see if I can pick out things that might not have been as evident during the real-time viewing of the game. That was how the idea and methodology of the CSSI was born back over at Motown Wings. I’m not the first person to do this (Ryan does some good work over at NOHS, for sure, as does JJ – the keeper of the CSSI flame – over at WIIM) and I most definitely won’t be the last, but with so much happening in these games, the potential for folks to pick up on different themes, plays and tendencies is off the charts. So I’m going to make a better effort to highlight some plays that stand out from each game, and we’ll see if we can turn this into a regular segment going forward.

With special teams coming under fire early in the season for the Wings, I’ve found myself paying more attention to the sets and positioning on both the power play and PK units. We’re all well aware of the crazy “three-across” set that Jeff Blashill debuted in man advantage situations earlier in the season, but one thing that continues to stand out is how the Wings attack (or the opposite, as you’ll see below) open areas on the ice. The sequence below is from the Wings first power play of the night against the Wild, one that would eventually lead to a goal moments after the expiration of the penalty. We’re not worried about that, though, as the action is question took place early in the man advantage.

This one all begins when Scandella fails to clear the puck from deep in his own zone and Lidstrom is able to set up for a quick, puck moving attack on the out-of-position Wild defenders. After hitting Datsyuk mid-circle with a pass. Pav reverses flow and goes cross-ice to the left handed Henrik Zetterberg, which gives us the following set: 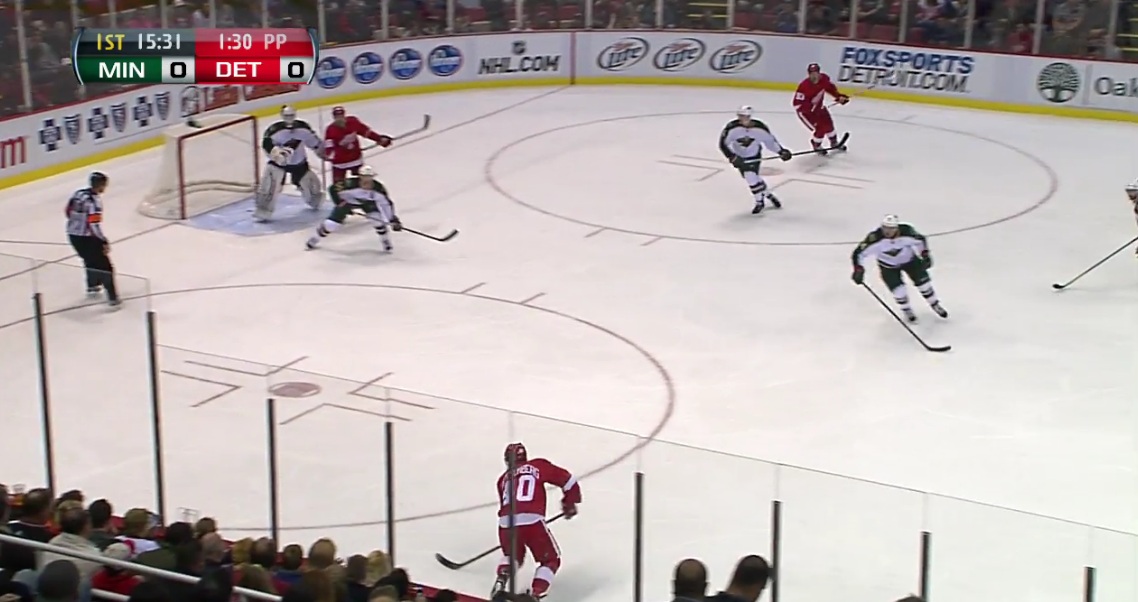 The key here is Johan Franzen. While Scandella looks like he’s turning his attention to Tomas Holmstrom in front of the net, he’s actually coming around to try and find the Mule, which you’ll see here: 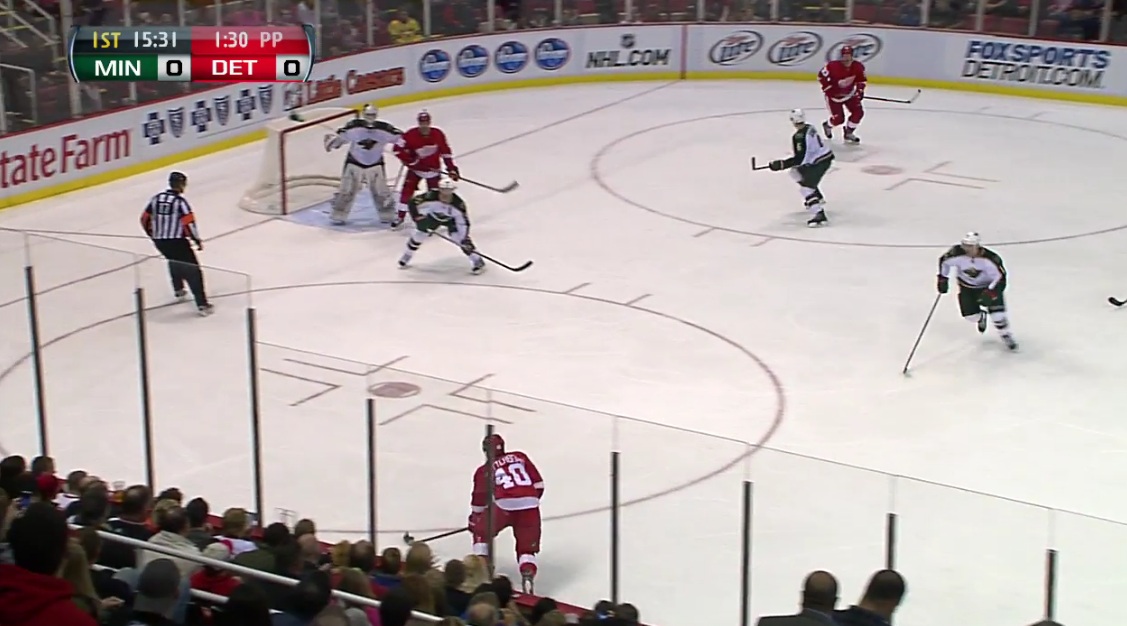 Unfortunately, the Mule has taken himself out of the play now, finding himself gliding backwards on a trajectory that leaves him open for a very low percentage one-timer on the goal line extended, with a pass very likely not getting through to him: 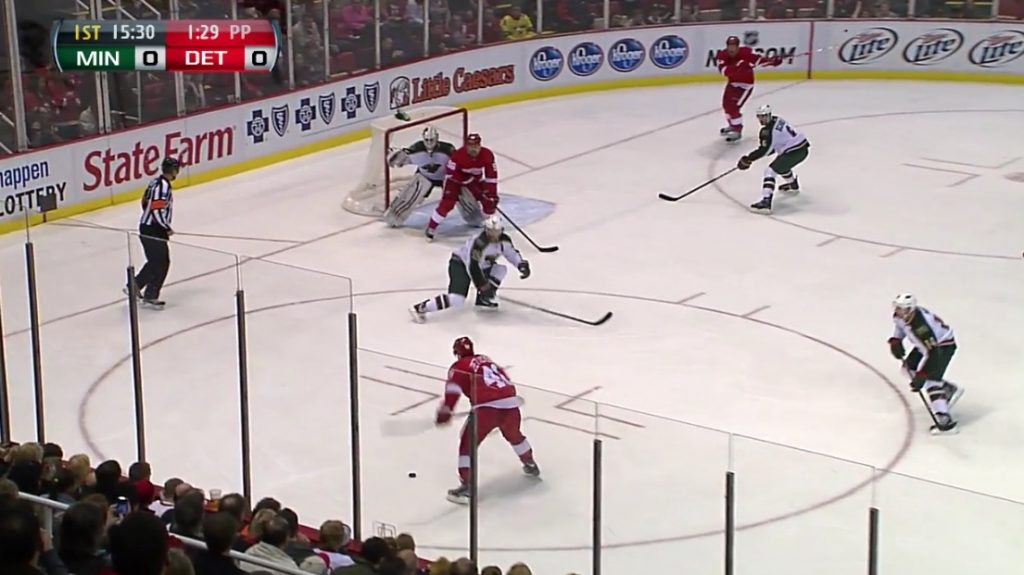 Hank opts to let it fly, handcuffing Harding and almost finding a way into the net. Alas, we settle for a faceoff.

But let’s go back to Franzen for a second. As Datsyuk is making his cross-ice pass to Zetterberg, we can clearly see that Franzen is watching him to dictate the flow of the play. When Pav sends the pass, Franzen is looking RIGHT AT HIM: 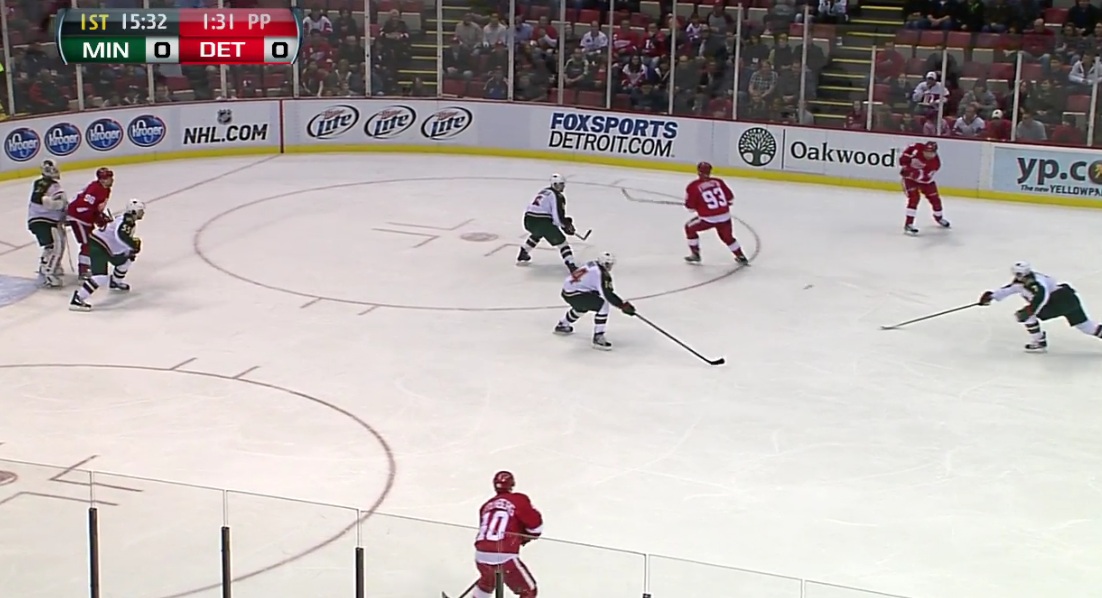 Here’s where things get a bit unfortunate. As Franzen pivots and opens back up, he opts to drift low behind Scandella instead of immediately changing direction and pushing to the soft and very open area in the slot. The moment Scandella turned his back to Franzen and took a quick glance at Holmstrom is when Mule should have begun his move toward the middle of the ice. With the defender off balance and having his back to you, and the flow of the play shifting away, resistance should be minimal and a quality scoring chance should ensue. 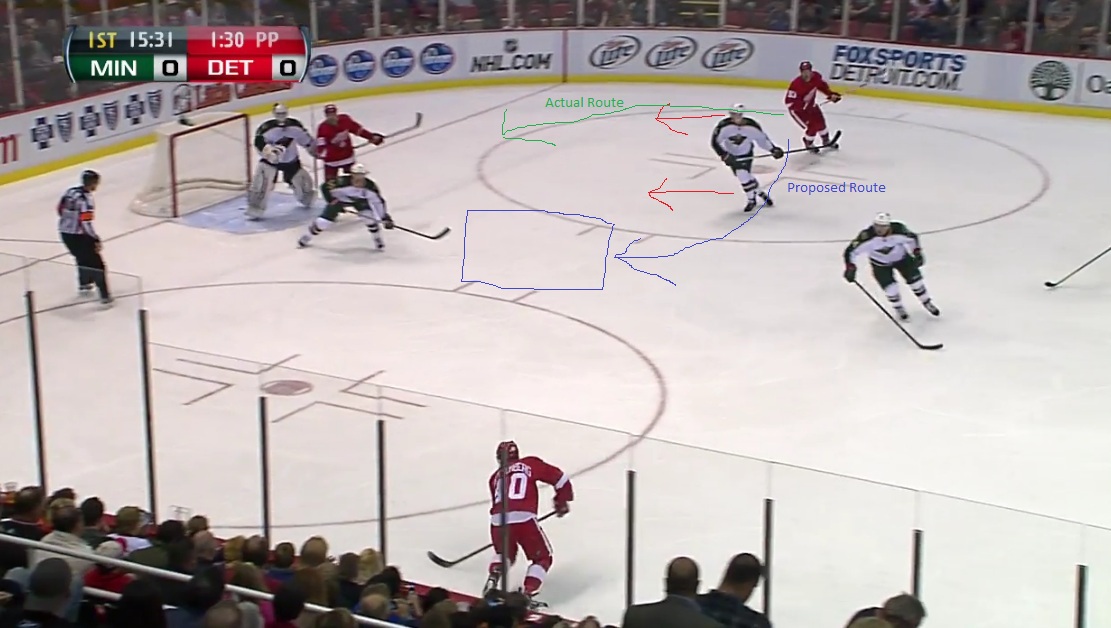 In Franzen’s defense, that’s a tough stop-and-go to get himself to the center of the ice with his momentum carrying him on his ultimate path, but that’s where the little extra pieces of hustle make the difference. If Franzen sells out and gets to the box, his chances of finding the puck on his stick increase drastically, and he’s looking at a high glove, one-time chance. Instead, he coasts and – in turn – bails out the poor positioning of Scandella by going right into the lane he is defending.

Also, If Franzen reads the pass and the defender correctly here from the moment Datsyuk sends the pass, he’s got a much better opportunity in front of him, even if he has to muscle up on Scandella a bit for position. With Scandella facing away from the play, it’s a simple two-stride box out for Franzen, leaving himself with a high quality shot from the slot.

2 thoughts on “Tale of the Tape: Exploiting Ice, Size”