Nov. 3 :: We’ve Got A Blind Date With Destiny, And It Looks Like She’s Ordered the Lobster 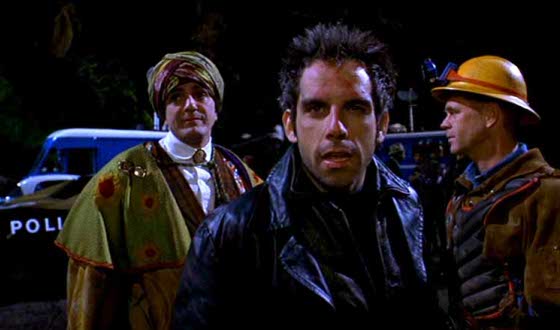 WHAT’S ALL THIS THEN
Game two of a six game homestand. Calgary comes to town for the first time this season. 7:30 pm. Joe Louis Arena.

NOW, WHERE WERE WE
Well, the Wings have lost five in a row, and what should be a lineup full of superheroes has become ineffective and stale. Thus, Mystery Men. We know these guys can be awesome and amazing…they just have to find their way. Which immediately begs the question “Who is the Sphinx for the Wings?”

THEIR LAST GAMES
:: The Wings DERPED their way to a 2-1 overtime loss against Minnesota on Tuesday, although Dave Jackson’s attention span did the Wings no favors either.
:: The Flames got curbstomped in their own building on Tuesday by the Canucks. 5-1 was the final damage.
:: The last time these two teams met was January 7th, where the Wings escaped Calgary with a 5-4 shootout win and a series sweep of the Flames. Wings goals were scored by Darren Helm, Patrick Eaves, two by Brian Rafalski and Todd Bertuzzi clinching it in the skills competition. Jakub Kindl and Valtteri Filppula were your healthy scratches, while Mike Modano (wrist), Dan Cleary (ankle) and Pavel Datsyuk (hand) were on the sidelines. You’ll also remember this as the game where Brad Stuart got his jaw broken on the flying elbow drop.

MEMBA ME?
No former Wings on the Flames, but David Moss hails from Livonia and Brendan Morrison was a standout at the University of Michigan.

OH, HI AGAIN
Brad Stuart, Todd Bertuzzi and Mike Commodore have all played for Calgary. Ed.: And Ian White too! (Thanks @JeffHancock41)

The TPL Name Game “Three Stars”
Just like last season, submit your nickname suggestions (follow the theme!), and we’ll use our Facebook page to allow people to vote for the best… the winner gets a free TPL t-shirt!
PETRELLA: Gustav “Word on the Street is You’re Lookin For Superheroes” Nyquist
DISCH: Mike “You Must Be Like Wolf Pack, Not Six-Pack.” Commodore
HOLLIS: Jonathan “I Don’t Need A Compass To Tell Me Which Way the Wind Shines” Ericsson
STEVIE:  Darren “Someone Must Have Ripped the “Q” Section Out of My Dictionary, ‘Cause I Don’t Know the Meaning Of the Word “Quit”‘ Helm

FOOD FOR THOUGHT
:: It’s the moment we’ve all been waiting for: Mike Commodore makes his regular season debut for the Wings tonight. He’ll be paired up with the RigBox, which (hypothetically) could be a solid physical pairing. Of course, there’s always the other option: they suck. At any rate, #22 will be on the ice and we’ll be watching him closely.
:: With the aforementioned Commodore cracking the lineup, Jakub Kindl heads up to the Lounge for a night off. Joining him will be Patrick Eaves, who apparently tweaked his back against Minnesota. Sounds like Eaves is in quite a bit of pain, which may keep him out of the lineup for a bit. Something to keep an eye on, for sure.
:: Up front, the Wings are returning to “normalcy” by splitting up the twins and reverting to lines that are very similar to what they opened the season with. The lines look good on paper, with Cleary and Scuttles surrounding Datsyuk, while Hank centers Mule and Bert – two guys who could use a jump start.
:: Five goals in the last five games for the Wings. Anything under three tonight is unacceptable.
:: One last thing to keep an eye on: This is the first time Brad Stuart and Tom Kostopoulos will share the ice since the latter tried to destroy Stuart’s face last January. With Kronwall sharing the line with Stuart tonight – and looking to reclaim his pride after getting jacked by Koivu – I’m expecting a Kronwalling all up in TK’s face tonight.

8 thoughts on “Nov. 3 :: We’ve Got A Blind Date With Destiny, And It Looks Like She’s Ordered the Lobster”