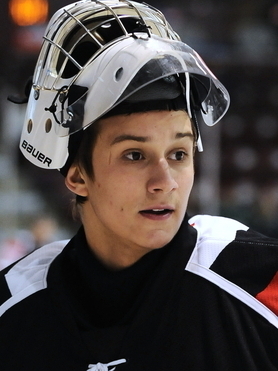 Word out of Motown this morning that the Wings have taken another step forward in securing their future between the pipes, as they have signed 19-year-old Petr Mrazek to a three year entry level contract. As Petrella pointed out on Twitter, since Mrazek is currently playing in juniors, the deal won’t kick in util next year and Mrazek won’t count against this year’s 50 man roster limit.

With Mrazek now in the fold, the Wings now *technically* have six goaltenders under contract (CHART!) with both Ty Conklin and Thomas McCollum only signed through the end of this year. With Jordan Pearce now looking like he’s secured the 4th spot in the goaltender hierarchy, that leaves Mrazek potentially challenging McCollum for the lead role in Toledo or a backup role in Grand Rapids next season (should he be re-upped.) Certainly an interesting turn of events given all the hype around McCollum when he was drafted, and one begins to wonder if he is starting to feel the heat with Mrazek under contract.

Well, fret not, because we’ll get all the answers from Thomas himself when he joins us on The Pipeline tonight as part of Thursday’s TP:60. Got a question for Thomas? Leave it in the comments or hit us up on Twitter.

Also, here’s the full release from the Wings on the Mrazek signing:

… Goalie Off to a Strong Start in the OHL this Season …

Detroit, MI… The Detroit Red Wings today announced that 19-year-old goaltender Petr Mrazek has been signed to a three-year entry-level contract. As per club policy, no further details regarding this deal will be disclosed.

In eight starts for the 67’s this season, Mrazek has earned five victories while posting a SV% of 0.925 and a G.A.A. of 2.34, tops in the OHL amongst goaltenders with at least 450 minutes of playing time. Prior to his tenure in Ottawa, Mrazek was a member of HC Vitkovice in the Czech Extraliga’s U-20 Development Program where he won a league championship in 2008-09.