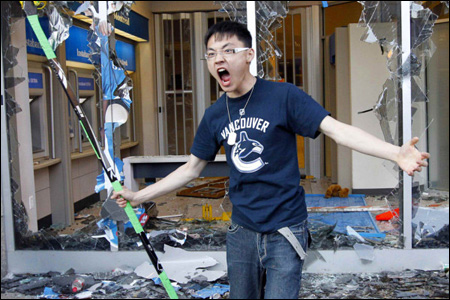 WHAT’S ALL THIS THEN
The Vancouver make their first post-Finals-turned-riot appearance in Detroit on Thursday evening. The official game time was pushed back to 8pm to accommodate the Detroit Tigers ALCS game against the Texas Rangers.

NOW, WHERE WERE WE
The Wings are off to a hot start, going 2-0 in the early season. Vancouver is 1-1-1 coming into tonight’s tilt.

BEST NAME NOMINEE
Aaron Volpatti is a pretty neat name. But we picked him because we were afraid that if we didn’t, he’d do this to us.

THEIR LAST GAMES
:: Detroit Conkblocked the Avalanche, 3-0, last Saturday.
:: Vancouver played last night, losing 5-4 to the Flyers.
:: The Wings and Canucks last played one another on March 23rd last season. Detroit was on the losing end of that one, 2-1. Howard was in net, and the lone goal scorer was Jiri Hudler. Scratches that night were as follows: Franzen (groin), Datsyuk (lower body), Bertuzzi (lower body), Kindl, and Osgood.

LITTLE HISTORY LESSON
Two days after that loss, the Wings signed our newest friend Gustav Nyquist. If you haven’t already, give him a listen on The Pipeline.

MEMBA ME?
Todd Bertuzzi is a former Canuck, having played more than 500 games in the orca sweater.

OH, HI AGAIN
Former Red Wing (and current favorite player of Jeff Hancock) Mikael Samuelsson plays up north now. He wears #26 if you don’t recognize the player firing errant shots off the top of the glass.

The TPL Name Game “Three Stars”
Just like last season, submit your nickname suggestions (follow the theme!), and we’ll use our Facebook page to allow people to vote for the best… the winner gets a free TPL t-shirt!
PETRELLA: Todd “So You Think I Got an Evil Mind” Bertuzzi
DISCH: Jonathan “I Don’t Wanna Be Your Fool Anymore” Ericsson
HOLLIS: Jonathan “Why Don’tcha Put Up or Shut Up” Ericsson

BANG YOUR HEAD
:: I’m sure Jimmy Howard’s going to want the first game back. He won, so it’s not all bad — but the wheels kind of fell off in the second half of the game, and three goals (the only three goals against so far this season) squeaked by.
:: Brendan Smith was called up yesterday to serve another of his five-game suspension. He’ll be in the press box tonight and Saturday, and Mike Commodore remains on Short-Term Injured Reserve.
:: The big three forwards scored in the last game — Datsyuk, Zetterberg, and Franzen all netted, matching the goal totals of Hudler, Emmerton, Lidstrom, Bertuzzi, and White. That’s 8 goals and 8 different goal scorers. Talk about spreading the offense and utilizing your depth early in the season. It also means that Niklas Kronwall, Valtteri Filppula, and Dan Cleary are all on Schneid Watch.
:: It looks like Patrick Eaves has found his way back into the healthy scratch rotation after ditching it late last season. Cory Emmerton and Drew Miller have yet to sit, with Eaves and Homer rotating… and Brunnstrom on the outside looking in (perhaps a little new guy hazing?). It’s a good thing for the team to have a talented guy like Eaves be a “13th” forward, and it bodes well for Emmerton’s future on the club. One has to wonder, though, if it’s the right move… because that’s what armchair coaches do.
:: The Euro Twins are back together on the top line, where they belong. By the end of the Avalanche game, they were together and I’m pretty certain they’re made of magic when they’re together. I understand the idea of wanting to spread the wealth, but it works when they’re on the same line. So let’s see how long that lasts.