The Curious Case of Tomas Jurco 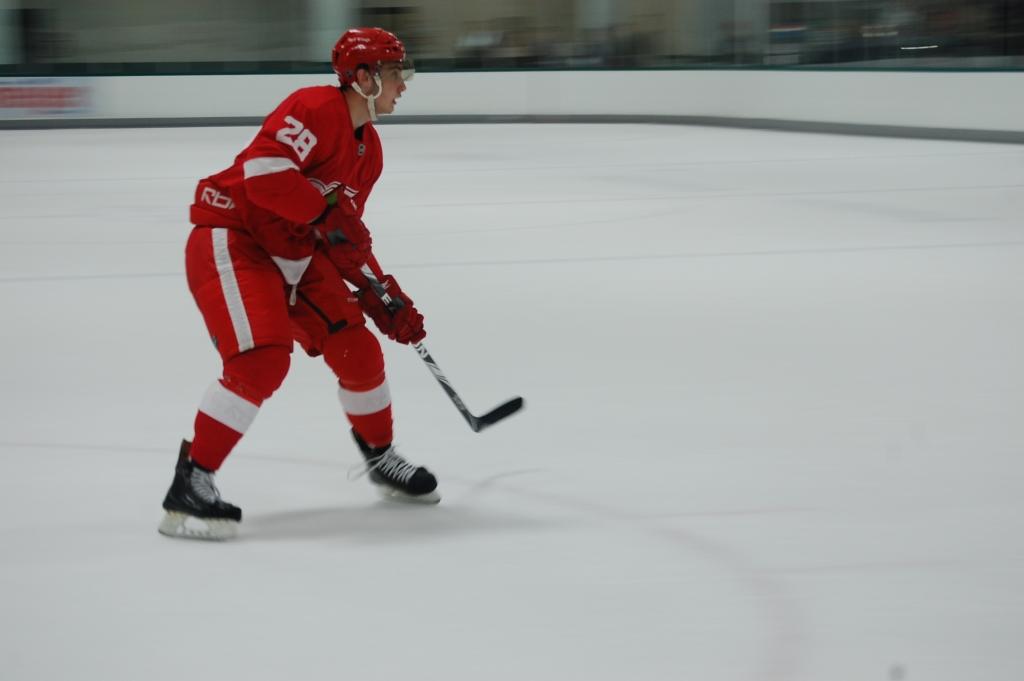 Coming to an NHL rink near you. Sooner rather than later, apparently.

Photo courtesy of Sarah Lindenau and The Left Wing Lock. Thanks, Sarah!

On Monday, the Detroit Red Wings sent a few kids home from camp.

Among the first cuts were goaltender Petr Mrazek, forward Brooks Macek, and 2011 Draft Picks Xavier Ouellet, Ryan Sproul, and Alan Quine — to name a few. All of the players were Juniors-bound, and typically these are the first ones cut. They get to return to their teams in the CHL, train a bit, and start the season. The rule states that any player that was drafted from a Canadian Junior League (the OHL, the WHL, or the QMJHL), and is under twenty years old, must be returned to their Junior team if they don’t make the NHL team. In other words, you can’t be assigned to your team’s AHL squad until you’re twenty.

But there’s one name left on the Red Wings roster that — in theory — belonged in that group: the Wings’ top pick in June, Tomas Jurco, 18.

The Junior team that holds Jurco’s rights, the Saint John Sea Dogs, have begun their season without him. As of this writing, they’re 1-3, good enough for last in the league but it’s early. Red Wings coach Mike Babcock hasn’t been shy in heaping praise onto the youngster, and it’s evidenced by Jurco’s continued inclusion on the roster.

It gets a little weirder.

Tonight, when the Red Wings take the ice in their second exhibition game, Tomas Jurco will be in the lineup. That, in itself, isn’t all that odd. A lot of 2011 Draft Picks are getting their first taste of NHL action during the pre-season. What’s odd is that there are several players bound for the Grand Rapids Griffins that will be sitting out. And didn’t play last night. Players that, you’d think, are higher up the depth chart at this very moment.

All are signed to pro contracts. Tomas Jurco is not.

All are slated to play in Grand Rapids this season. Tomas Jurco cannot.

All hope that they get a call-up to sniff the NHL soon. Tomas Jurco won’t.

Not to make a bigger deal out of something than it is, but Tomas Jurco may be closer to making the Detroit Red Wings than anyone thought he would be three short months after being drafted. It’s still incredibly unlikely, considering that the Wings have 14 forwards on one-way contracts, and a couple of guys that are battling to make those decisions difficult for the braintrust — namely Chris Conner and free agent tryouts Fabian Brunnstrom and Ryan Johnson.

No one thought that Tomas Jurco would be making things difficult as a teenager. The situation is different than Tomas Tatar two seasons ago, who joined the Griffins at 18. Tatar wasn’t drafted from a CHL team (even though his rights were held by Kitchener, and traded to Plymouth), so he didn’t have to make the Red Wings to stay within the organization’s reach.

The fact is that Jurco can still be returned to Saint John, and in all likelihood he will be… as soon as this evening. But to be the last Junior-aged player left at Red Wings camp is nothing to sneeze at… and being a Junior-aged player playing above a half-dozen Griffins is even better. And maybe he’s only playing because he missed a few opportunities to show off during Prospect Camp with a hip flexor injury.

But wouldn’t it be something if our newbie bucked the trend?

14 thoughts on “The Curious Case of Tomas Jurco”