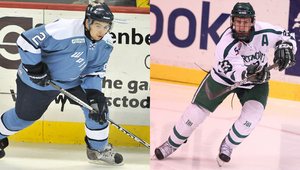 AHL-only contracts mean that they won’t be eligible for call-ups to the Detroit Red Wings unless the Wings were to first sign them to an NHL contract, but they likely wouldn’t have been on the short list for such a thing at this point in their careers anyway, especially when they’ll be competing with the likes of Gus Nyquist, Chris Conner, Brendan Smith, and Doug Janik.

Both 22-year-old men played four years of collegiate hockey for Dartmouth College — Estoclet, a forward, registered a team-high 16 goals in 34 games and joined the Providence Bruins of the AHL for a tryout at the end of the season; Rufenach, a defenseman, recorded 11 points in 33 games during his senior season, and played a handful of games for the Red Wings’ ECHL affiliate Toledo Walleye after his school’s season ended.

Both Estoclet and Rufenach are currently representing the Detroit Red Wings at the Traverse City Prospect Tournament and will likely stick around for main training camp at the end of the week. They will be joined by Greg Amadio as players on AHL-only contracts.

Photo courtesy of the Griffins.