(Ed. note: “The Top Shelf” is our newest attempt at staying relevant in all of the happenings around the hockey interwebz. Why “The Top Shelf”? Because it’s one of those great hockey cliches that also happens to be the only kind of booze we sip here at TPL. While there won’t be a regular posting schedule for it, we’ll be using it as our standard platform for sharing all the happenings we find entertaining or relevant, without blowing out an entire post. Have something you want included? Mail us, fool.)

Salute Your Shorts :: Since it’s Mid-August, that means all the youngsters packed their bags and headed to Brendan Shanahan’s Crazy Camp of Rule Changes and Other Oddities. Back for the second year in a row is the brightly colored goal verification line – this time sporting a shade of lime green as opposed to last year’s yellow – alongside updated ideas like the 3-on-3 overtime and the “Max Pacioretty Memorial” curved glass near the benches. Perhaps most interesting, though, is the return of “icing on the penalty kill” that was decried by every GM in the league, as well as college hockey coaches across the country. Nevertheless, the league continues to sees importance in exploring ways to add value to the powerplay in an attempt to jack up scoring and keep play moving. Wysh over at Puck Daddy presents an interesting counter-point though:

If there’s one thing to know about NHL coaches, it’s that they’re adaptable creatures. Create rules that restrict something, and they’ll find a way around them. Or have you not noticed variations of the trap in 2011?

One theory on penalty kill icing — coaches will simply instruct their killers to ice the puck with regularity.

It’ll give them a breather. It’ll break up the other team’s momentum (and it’s not like the shorthanded team needs to create any of its own, being that they’re in a defensive mode). And as long as your best defensive center is a better face-off man than their best offensive center, there’s a chance your team comes out unscathed.

This would be the hockey’s equivalent to a filibuster in Congress. “I don’t agree with this, so let’s waste everyone’s time until I get my point across.” It would probably be worse than the last two minutes of an NBA game. That said, it’s not the worst idea in the world from a coaching standpoint…if you hate hockey fans and want an arena full of booing.

Welcome to the Atom Bomb.

This is truly the nuclear option for the NHL and its power plays, fundamentally changing minor penalties by having every penalty served in its entirety. Score in the first 15 seconds of a power play? Congrats, sirs; now you’ve got 1:45 to score a few more.

It’s the hockey equivalent of those air-blown money grabbing machines.

It’s also a throwback to when power plays were really dangerous: Back in the 1950s, when the penalties were served in full and the Montreal Canadiens were scoring so often with their Hall of Fame unit that goal judges would just keep the goal lamp lit for two minutes.

Wysh goes on to talk about how this could be beneficial with penalty calls being on the decline over the past few years, but it was his reference to a quote from SI.com’s Michael Farber that really got me thinking critically:

“Maybe it further discourages penalties and increases the amount of five-on-five play, worth considering given the special-teams fests now on display many nights.”

This is stupid. I understand the “more goals = more entertainment value” argument, but I also know that there’s nothing worse to the casual fan than flipping through the channels and stumbling onto an 8-1 blowout. And while Farber’s point may be somewhat outdated with the recent drop in called penalties, his point about not wanting to see a special teams fest still holds true, which is exactly what you open the doors to if this rule were to take effect. Sure, teams would likely even the “penalties called” ratio over the course of a game in terms of 5-on-4 play, but can you imagine a 90 second 5-on-3 that has to be served in its entirety? The game could be over in those 90 seconds. Sure, you get your scoring, but at what cost to the fans that potentially have to suffer through a game that was ended by the whistle of the referee? And can you imagine the outrage if the call that put the team on the 5-on-3 advantage was of the borderline variety? No thank you.

I Went to the Fights and a Hockey Game Broke Out :: There’s been plenty of chatter this week about the New York Islanders scheduling a viewing party tonight to coincide with MSG re-airing the brawl filled attempt at a hockey game last February 11th (greatest day of the year, BTW) against the Penguins, but Stu Hackel over at SI.com reports that the party has taken a turn toward “tame”:

SI.com has learned that the party will go on, but the Islanders and MSG Network have agreed to switch the game to a victory over the Sabres in which Michael Grabner’s hat trick goal was the winner.

The Feb. 11 game, which featured 15 fighting majors, 14 game misconducts and 346 minutes in penalties, resulted in two Islanders receiving suspensions and the team being fined $100,000. It was a post-lockout lowpoint for the NHL. The Penguins, and most people  around hockey, consider it an embarrassment  (Penguins owner Mario Lemieux called the game “embarassing” and “unacceptable.”) With Zdeno Chara’s vicious hit on Max Pacioretty a few weeks later, it ranks as one of last season’s worst incidents. While the concept of celebrating it was admired in some places, others reacted negatively, ranging from mild rebuke to near-apoplectic outrage.

“We do not approve of the use, based on what we know,” NHL Deputy Commissioner Bill Daly told Kevin Allen of USA Today.

Frankly, it’s disappointing to see the Islanders and MSG pull back the reigns on this. Sure, the game will long be remembered for Trevor Gillies cheapshot punch-up of Eric Tangradi, but taking the game off the air is nothing more than caving to a league that’s incredibly sensitive about the image it projects to prospective and casual fans. Meanwhile, Darren McCarty and Claude Lemieux regularly stage book signings and promotional tours based on the bad blood of a rivalry over a decade old, and if the Wings decided to host a viewing party for “The Brawl In Hockeytown” I hardly expect there would be a peep out of the league protesting it. Instead of allowing a suffering fanbase the chance to rally around a defiant moment in franchise history, everybody in Long Island can now get drunk while watching Michael Grabner notch a hat trick in a largely meaningless game. In a way, it’s fitting for the Islanders. Personally? I’d rather watch Brent Johnson drop Rick DiPietro with one punch again. Way more entertaining, right Rick? On second thought, I’d rather watch the ice babe take down DiPi. Better step up your game this year Brent.

Why go to the park and fly a kite, when you can just pop a pill? :: Seinfeld references aside, friend of the blog Justin Bourne has a very serious and well-written piece over at Puck Daddy on the culture of prescription pill use in hockey, and if you haven’t read it, I highly suggest you get on that:

I sat in my hospital bed the night before and had the chance to speak with (OK, mumble at) my girlfriend on the phone after the accident, at what really should have been my lowest of low points. There was a chance I might look different, my hockey season was likely over (and having turned 26 the day the puck hit my face, I didn’t have many years to play around with), and my jaw would have to be clamped shut for nearly two months.

I didn’t know it at the time, but I would never play another shift of pro hockey again.

Instead, I was PUMPED when I talked to her, because apparently morphine is a hell of a drug (to steal a line from Rick James). I was going to catch up on my reading and get box sets of TV shows on DVD and watch ’em all and make awesome smoothies with berries and ice cream and peanut butter and have more time to hang out with her and … and … and then it would start to wear off.

Another hit, and more excitement coursed through my veins. Maybe I’ll start a blog!

That that stuff can warp your mind in that way is incredible. And scary.

I’m completely comfortable saying that I was morphine and drug free when I decided to start blogging, but I can’t speak for Disch and Petrella. I assume they were on something good when they asked me to come over and start writing here. At any rate, Petrella’s got a follow-up to Bourne’s piece on the site this morning, and, again, I  suggest that you give it a look. It’s a very serious subject among athletes everywhere, and increased awareness and support can only be a good thing.

Somebody likes us. Or feels bad for us. :: Apparently, TPL has been nominated as one of the “Most Valuable Blogs” as part of CBS Detroit’s “2011 Most Valuable Blogger” competition. If you nominated us and are reading this right now: Thanks. If you didn’t nominate us and are still reading this, click the shiny button below and go throw a vote of confidence in our corner. 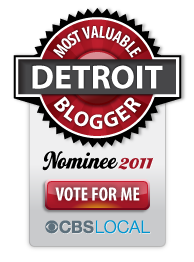 The good news for you is that we won’t be asking you to incessantly click on the voting button – see “Operation: Curly Fries” – since there’s only one vote per day. The bad news is this means Malik is probably steamrolling us, looking back over his shoulder, and then putting it in reverse to roll us again. Love you buddy.

Meanwhile, my Mom is in full campaign mode on Facebook (so says the fiance), so don’t let her down. Otherwise, her and the rest of the TPL Moms will guilt-trip you just like your mothers did all through your formative years.

And finally… :: Howe and Yzerman are in NHL 12 as “Legends.” I still can’t wrap my head around the video of Yzerman in a Bolts jersey next to Stamkos, but “The Dark Knight” soundtrack-type music is sweet and you better believe “Pegi 16” is going to get some kind of play on the site this year. The Wings national TV schedule is out, which means Petrella’s due for a “Wings Wings Tuesday” post. Oh wait, there it is. The Grand Rapids Griffins are also going to play some hockey this year. Steve Kampfer (GO BLUE!) is bringing the Stanley Cup to Ann Arbor next Thursday. Feel free to drop it off at JLA, Steve.