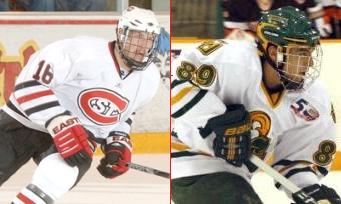 The Detroit Red Wings have opted not to sign a pair of prospects, thereby losing their exclusive rights. Right Winger Nick Oslund and Defenseman Bryan Rufenach are free to sign with another NHL club, or any professional team, now that Detroit has allowed their rights to lapse. Both players, however, have accepted amateur tryouts and will be in attendance at the NHL Prospects Camp hosted by the Red Wings.

Under the current CBA, teams that select amateur players that opt to play collegiate hockey have until their collegiate playing days are over (so, August 15th after their senior season) to sign them to a contract. Oslund has concluded his fourth year at St. Cloud State; Rufenach played four seasons for Clarkson.

There’s no reason that the Wings can’t invite both players to their training camp in September — accepting an invitation would be up to the individuals. As you may recall, a few seasons ago the Red Wings declined to sign Zach Torquato, the player they selected the round before Rufenach. Torquato signed an amateur tryout contract with the Minnesota Wild and was actually in attendance at the Traverse City prospect tournament as a member of the Wild.

Rufenach played in a six games with the Toledo Walleye, the Red Wings’ ECHL affiliate, at the end of last season, scoring a goal and adding an assist. Both players were in attendance at the Wings’ strength and conditioning camp in July and will participate in the prospects tournament next month, however it would seem that neither are in the team’s plans moving forward — or, at least, not worth removing someone from the 50-man roster that each team must abide by.

Looking ahead to next summer, the Red Wings will be forced to make similar decisions regarding three unsigned draft picks: Julien Cayer (a fifth round pick in 2008 who was Rufenach’s teammate at Clarkson for the last three years), Brooks Macek (a sixth round pick in 2010 currently playing in the WHL), and Petr Mrazek (a fifth round pick that has turned out to be one of the savvier goaltending selections in recent years — almost a shoo-in for a contract).

There will be plenty of spots on the 50-man roster, however, as 13 players are unrestricted (Bertuzzi, Commodore, Conklin, Holmstrom, Hudler, Kronwall, Lidstrom, Stuart, Chris Conner, Garnet Exelby, Doug Janik, Jamie Johnson, and Chris Minard) — some of whom may retire — and four more are restricted (Abdelkader, Helm, Travis Ehrahrdt, and Thomas McCollum).