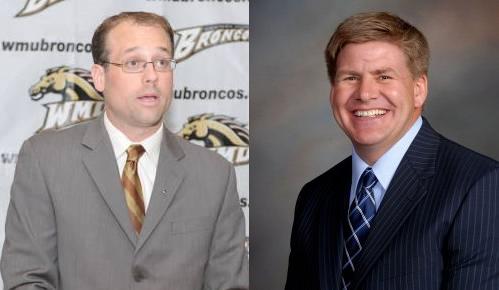 On Friday, the Detroit Red Wings rounded out their coaching staff, as general manager Ken Holland and head coach Mike Babcock decided who they’d like manning the bench alongside Uncle Mike. It’s been fun to speculate over the last few weeks, but on Thursday afternoon, we were warned that the Wings’ choices may be “off the map.”

After meeting with several excellent candidates (including Ken Hitchcock, Pete DeBoer, Gerard Gallant, Bob Boughner, and Todd Richards), the team has announced that they’ve selected Jeff Blashill and Bill Peters to be your new coaches of the Detroit Red Wings.

Jeff Blashill was the head coach at Western Michigan University last season, and in his first season as a head coach at the collegiate level lead the Broncos to the CCHA championship game for the first time in 25 years, and a national tournament berth for the first time in 15 years. Prior to WMU, he was the head coach and general manager of the Indiana Ice of the USHL for a pair of seasons, winning a championship in 2009. In the six years prior, he was an assistant at Hollis’ favorite collegiate program, Miami of Ohio (seriously… ask him about it sometime)[Eat a dick. -CH], after three years as an assistant at Ferris State, where he played his collegiate hockey (as a goaltender) until 1998.

Bill Peters joins the Wings from the Rockford Ice Hogs (in the Chicago Blackhawk organization), where he was the head coach for three seasons. When Mike Babcock was head coach of the Spokane Chiefs of the WHL, Peters was a scout and eventually Babcock’s assistant. After a brief stint at the University of Lethbridge, Peters rejoined Spokane as its head coach, winning the Memorial Cup in 2008.

In short, both new assistant coaches know how to win. One has a USHL title under his belt and rejuvenated a fairly stagnant college program, returning it to more-than-competitive. The other has coached Canadian Juniors and won what is considered one of the more prestigious hockey championships in North America.

Both assistant coaching slots needed filling after five-year assistant Paul MacLean departed to become head coach of the Ottawa Senators and three-year assistant Brad McCrimmon left Detroit to take a head coaching job overseas. MacLean ran the offense for Mike Babcock, dating back to the Anaheim days; and McCrimmon replaced Todd McLellan, who left after the 2007-08 season to coach the San Jose Sharks.