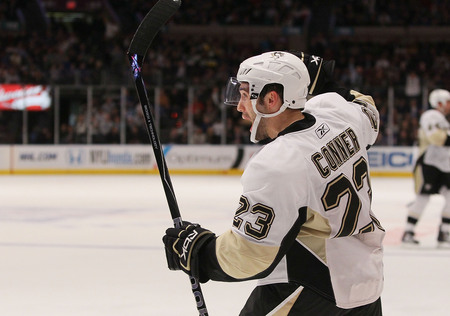 Per team officials, the Wings have signed free agent forward Chris Conner to a one-year deal. The 27-year-old Westland native played college hockey at Michigan Tech before turning pro in the Stars organization. He split last season between the Wilkes-Barre Scranton Penguins and the big club in Pittsburgh.

Conner’s a smaller winger (5-8, 180), but he’s “very fast… and scrappy in the corners,” according to scouting reports. There are no financial details yet, but it’s fair to assume that he has signed a two-way deal and will likely spend the season in Grand Rapids, but will be given the opportunity to play his way onto the Red Wings as the 14th forward, a slot currently occupied by Cory Emmerton. Emmerton, as well as Conner, will have to clear waivers before being sent down to the AHL.

After only playing in a handful of games in the AHL last season, Conner was called into duty during the Pittsburgh Penguins’ rash of injuries. He spent the majority of the season in the big leagues, playing in sixty games, and earning an NHL cap hit of $550,000, which was just north of the minimum. This season’s minimum salary is $525k, so expect a number in that general area. He will likely earn the maximum money at the AHL level, which is $105,000.