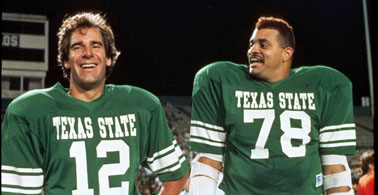 Win a few more and it's time to... PAAAaaaaaAAAaaarty.

WHAT’S ALL THIS THEN?
The series swings to Arizona, as the Wings and Coyotes play their first of back-to-backs in the desert. The puck drops on Game 3 at 10:30pm in the East. 7:30pm Phoenix time. 9:30 in Winnipeg.

WATCH IT
Versus, CBC, RDS, Fox Sports-Detroit and Fox Sports-Arizona will all carry the game, depending on your geography.

The TPL Name Game “Three Stars”
Disch: Darren “He Played Like a Goddamn Wildman! No, Like a Rampaging Beast! And That’s the Way You Gotta Do It! You Go Out There, You Tear Their Fucking Heads Off, And You Shit Down Their Necks! Let Us Pray” Helm
Petrella: Phoenix “The Alamo Was the Home Field” Coyotes; Also: Jonathan “Fumbleaya. Fumbleruski” Ericsson
Hollis: Chris “Oh Yeah, Well I’m Not That *Eld* Alright?” Osgood
*Now it’s up to you! Think up your best names and throw them in the comments — the best one will be shared for all to enjoy on the TPL Facebook Page. The best of the best will be pitted against one another at season’s end, and the winner takes home a TPL Shirt of their choice.*

TIDBITS
:: With Henrik Zetterberg unable to return to the lineup, Pavel Datsyuk took over Game 2. Among his four points was this absolutely filthy set-up of Darren Helm’s goal, and everyone’s junk moved. If ever the Red Wings needed a superstar to step up, it’s now. The Wings slid into the playoffs, not playing their best hockey and the Coyotes were the sexy pick among brain-dead analysts. With one superstar down, another one steps up. The Aristocrats.
:: Meanwhile, Henrik Zetterberg has made the trip to Phoenix, but isn’t expected to play. During the broadcast on Saturday, they showed a few seconds of Z skating, but he ended up wincing and hobbling off the ice. I’ll be honest, it didn’t look good. If it’s a ligament strain (as suspected), he’ll heal, but you don’t want to push and come back sooner than you should. Hopefully, the Wings can keep up their torrid pace, get out of the first round and give Hank as much time as he needs to prepare for Round 2.
:: Our usual playoff destroyer, Johan Franzen, had a rough second game. After only 1:22 of icetime, he caught an edge, didn’t get any help from two pursuing Coyotes, and ate some boards. Twenty-something stitches later, he came back looking like Frankenstein. My favorite moment (aside from the Datsyuk through the legs move) was Franzen shaking his head like “no, bro” when Babcock asked why he didn’t have a visor or mask. He played the rest of the game pissed off, and something tells me he’ll come screaming out of the gate tonight. Watch your ass, Doan.
:: Nicklas Lidstrom was +2 in Game 2, and he improved to +55 in his career in the post-season. Per Ansar Khan, that’s an NHL record. So, just an average Saturday for Norris Nick.
:: The first game after the FREE THE OCTOPI campaign was kick-started, one cephalopod did hit the ice, immediately after the anthem and landed between Jimmy Howard and his net. I’ve got the over/under for tonight’s octopi at 1.5, any takers?
:: Per team release, the Red Wings will be hosting viewing parties for the away games, giving Metro Detroiters a chance to get together and cheer on their team. For tonight’s game, head over to Hamlin Pub (50659 Gratiot in Chesterfield); and Wednesday’s Game 4 can be joined at Motor City Casino downtown. Check the official site for more details.

WHAT WE LEARNED IN GAME 2
An outrageously dominant first half of the game doesn’t mean you get to coast for the second half.

THINGS TO LOOK FOR IN GAME 3
:: In the White Out (lol), will the Coyotes get any energy from their crowd like the Red Wings have been? Or will the Detroit fans be loud, thus giving the road team a boost?
:: The Coyotes turned up the heat in the physical game on Saturday. One can only assume that trend will continue and the Wings will have to watch out for flying elbow drops and other tomfoolery up the sleeves of class acts like S. Albert Doan.
:: Ilya Bryzgalov will want to rebound from a less-than-stellar performance and regain his status as the best player in the series (lol, again). Make no mistake, he has the ability to be a game changer, and just because he was (easily) beatable in the first two games, doesn’t mean he’ll let floaters in from above the circle tonight. Although, if I’m Mike Babcock, I’m urging the boys to try anyway.

TPL PREDICTS…
:: Bryzgalov gets pulled in one of these two games in Phoenix. And I get to pull out a SWEET CANDELABRA OF LABARBARA! reference, a la Hermes Conrad.