Part IV :: One More Loss and One More Bus 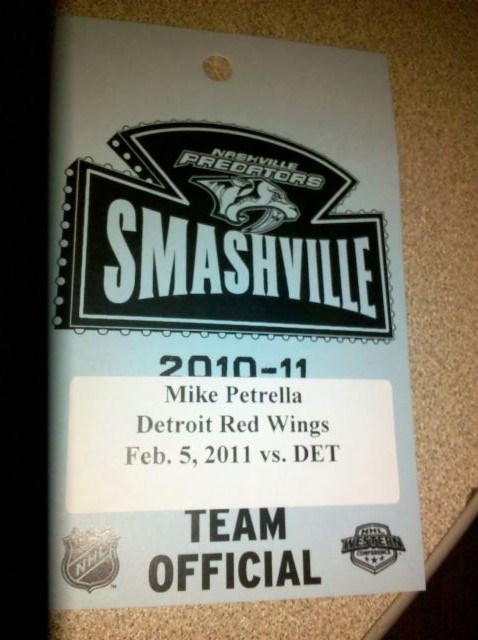 BRIDGESTONE ARENA
We packed up our hotel room and headed down toward the elevators. We were instructed to load our luggage onto the bus so that we could hightail it out of there as soon as the game ended.

The elevator doors open and we hop in, joined by Valtteri Filppula. I mention that we had Ilari on TP:60 and that he was talking shit about little brother…and told me who he thought would win in an arm wrestling match.

“What do you think he said?”

The Wings hooked us up with great seats for the Preds game, about twelve rows up in the end where Detroit shot twice. Something I should get off my chest right away: that arena is gorgeous. The city’s pretty awesome, and there’s no doubt they love their Predators. But, like we always see on TV, the arena — and downtown — was dominated by Red Wings fans. Easily 60/40 in red and white, if not more.

The Predators fans may still be learning the ins and outs of the game, but there’s no doubt at all that they love their squad. They had prepared chants, like a European soccer game, and were respectful of fans of the opposite team: something that I can’t say about every arena I’ve visited.

During the first intermission, they had a mini-concert while the Zamboni swept the ice, which is a brilliant idea. Every minute that you’re in Bridgestone Arena, you’re being entertained — another thing other rinks could learn. I’m sure more than a few Detroiters were irked by Alice Cooper (along with Vince Gill) performing in Nashville. They presented him with a Preds jersey after he sang a few tunes, but he didn’t put it on. If you’re asking my opinion (and I know you’re not), I bet the Predators planned to have a Michigander perform AGAINST the Red Wings…and the performer simply didn’t check out the schedule.

BACK TO BACK HEARTBREAKERS
Unlike the Blue Jackets game, it looked like the Red Wings game to play. There was more jump in their step, they were utilizing the drills that Coach Bedard put (a few of) them through in the morning, and they seemed to genuine want to score a goal this time around. But just like the night before, they failed to get anything by a hot netminder. Speaking of which, Pekka Rinne and Anders Lindback are both huge. Like… monster huge. We always hear about that, but I’m not sure I appreciated how large they are until I saw them skating in warmups with their teammates next to them.

Once again, I found myself hoping that they could get just one so that they weren’t miserable on the flight back to Detroit. They hadn’t been in the most chipper of moods, and I was looking forward to at least bullshitting with a few of them if they were up for it.

The game ended, another 3-0 loss, and we took our little credentials and headed down the elevator to “event level” and we were directed toward security one more time. Just like in Detroit, Ken Daniels helped out with the wand, as the team completes security screening (and customs, if necessary) before even getting on the bus to head to the private airfields.

The first player out of the locker room to join us by the bus is Jan Mursak, walking with a severe limp and with only one shoe on. We know now that he took a Shea Weber shot off of the toe, and he didn’t look too thrilled about it, obviously in a lot of pain.

Slowly, the team crept onto the bus — once again avoiding eye contact with Coach Babcock. Mr. Holland didn’t look too pleased, either, and why would he be?

The team started wondering what the weather was like back home, and if there was any more snow. Howard says that “Ozzie said we got 8 inches” referring to a text message weather update, which — let’s be honest — is pretty adorable. No one seems eager to return to the weather waiting for them, but you can tell they’re slightly horrified at the idea that our flight might be delayed or canceled. They want no part of staying another night — it’s pretty clear they want to get home, to their own beds, and many of them to families, and just forget this weekend happened and start fresh on Monday.

The bus pulled up to Red Bird I on the runway, and we started to shuffle out. This would be my last hour or so with the team, and I figured if I worked up the nerve to hand Todd a Shirtuzzi… maybe I could salvage a smile out of this group before the weekend ended…

4 thoughts on “Part IV :: One More Loss and One More Bus”