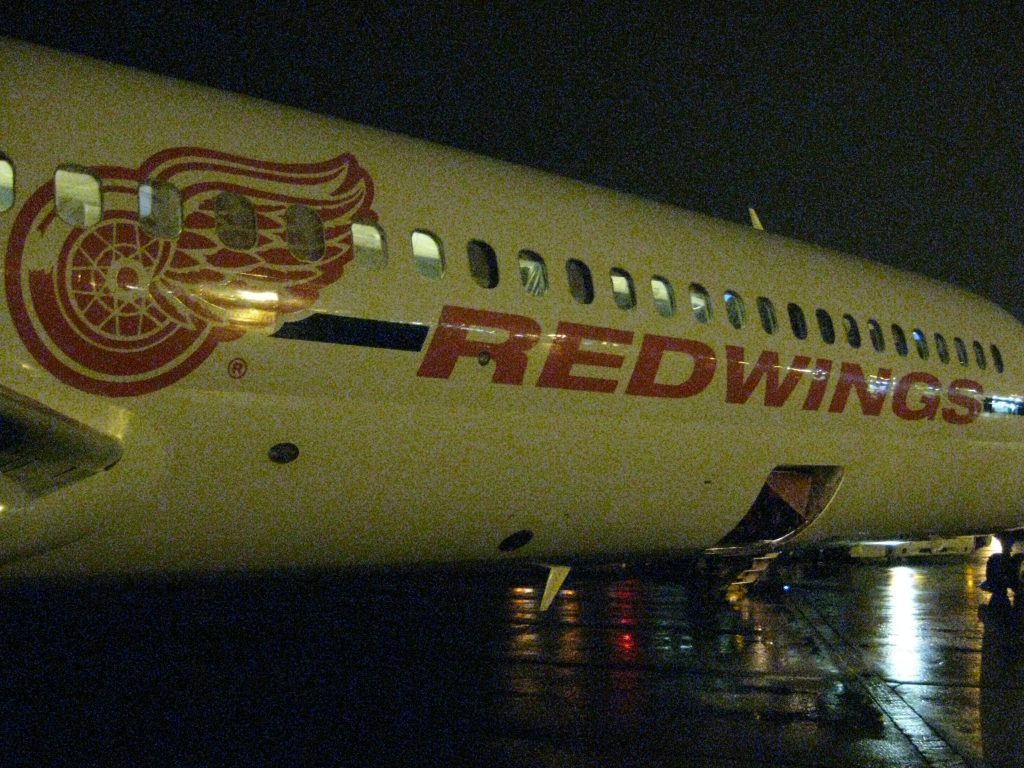 ALL ABOARD
We climbed the stairs of Red Bird I, knowing we had beaten almost all of the team (hold for Rafalski and Bertuzzi), but when we were being shown to our seats, I noticed that most of the personnel — coaches, management, trainers — were already on board.

The first person I see is Mr. Holland — he’s seated in the first row on the left side of the plane. As soon as I duck in through the door, he stands up, extends his hand and says, “Hello. I’m Ken.”

Knowing what I know about him now, this isn’t surprising in the least. He’s one of the most friendly human beings I’ve ever had the pleasure of speaking with, but to hear someone who’s so revered and respected introduce himself so casually was pretty neat. I shook his hand and said, “It’s a pleasure to meet you, Mr. Holland.” I’m not sure I’d ever be able to bring myself to call him “Ken.”

On board, I see that most of the plane is divided into tables of four. Two sides of a table face one another in big, comfy, leather seats — with a large wooden table between them. On the table waiting for us (and everyone else) is a spread of cold cuts and cheeses. I’m sure the players are famished after three hours of hockey.

As I was still trying to process what had just happened with Mr. Holland, I realize that I’m sitting in an area with all of the media folks — Mickey Redmond, Paul Woods, Ken Kal, John Keating… Daniels was still screening players — and the coaching staff. Paul MacLean wasted no time to start dissecting game film. His laptop had been loaded with footage and as I sat down, he pressed play on the opening faceoff. Pretty wild.

Slowly but surely, the players started to stream onto the plane — most of them giving us a head nod or a little hello, very few of them making eye contact with Coach Babcock. I start going through the roster in my head, crossing off guys I’ve seen enter, trying to keep the lineup straight in my noggin.

Niklas Kronwall was wearing his Potter glasses. Jiri Hudler really is noticeably shorter than most of the other guys. Jonathan Ericsson is a goddamn beast. Nick Lidstrom has a halo. Val Filppula liked the tie/vest combination I decided to wear after changing my mind fourteen times.

Once Jan Mursak walked by, I figured we might not see Pavel Datsyuk on this trip after all.

PRIVATE JETS ARE THE WAY TO GO
The service aboard the plane is unreal. We were asked — no joke — five or six times if we’d like anything to eat. They had several choices of meals, and I assume that the guys all have their “flight meals” that they swear by. Anything you could possibly ask for — they probably had on the plane. The overhead compartments? Stuffed with chips and gum and cookies and whatnot.

I’m so used to taxiing on the runway for three goddamn hours that I was startled to find we took off about nine seconds after the door closed. They didn’t harass me for not having my seatbelt on. No one mentioned the window shade being down (I knew that wasn’t the reason planes stayed in the air), and before I even realized, my phone was sending and receiving e-mails. Interferes with the instruments, my ass. I didn’t lose service until somewhere over Ohio (of course that’s where it would be).

As soon as we were airborne, Mickey Redmond wandered back to our table and hung out for a few minutes, lamenting the night’s effort but confident the next night would be better. You can tell these guys work hard doing what they do, because Mr. Redmond and Mr. Daniels both looked like they could fall asleep within thirty seconds if challenged. Nevertheless, it was awesome to chat with #20 for a few minutes and my dad couldn’t help himself but to tell him I’m part of the triumvirate of masterminds behind Operation: Curly Fries. Mr. Redmond’s reaction? “They always find a way to make a good thing go bad.” Clearly, this man is  pro-fries.

I decided that this leg of the journey probably isn’t the best to go mingle with the players. They weren’t making much noise back there (although, it was midnight by now) and I figured they’d rather be alone with their thoughts and iPads than shoot the breeze until we landed.

When we did arrive in Nashville, we walked down onto the runway to find that Mickey Redmond was pulling his weight in the way that Ken Daniels had through security screening. Redmond was on the baggage conveyor belt, getting everyone’s bags off of the plane faster than the three actual baggage handlers could dream. One of them tried to get his hands in there to help, but Mickey was moving so quickly, he was better off letting the pro do his thing.

DEAD SILENCE ON THE BUS
We got our bag and headed to the charter bus, which had pulled up to where the plane landed. Baller.

Heading to the hotel, it was completely silent. I kind of figured it would be — considering the plane was pretty reserved, and it had only gotten later. I sat directly behind Valtteri Filppula and his non-Red Wings Lacoste bag. Most of the other guys had black duffel bags with the winged wheel adorning it, but we all know Val rolls in luxury.

As fans, we expect the players to be affected by a loss. And we usually demand perfection from them. But, having played the game for a handful of years, I can say that they’re all still human beings and though I’m sure they don’t like losing, they let it roll off of their backs. And they would. But not tonight. Tonight, they were silent.

One player (who will remain unnamed), as we meandered our way through Nashville, looked out the window and joked “neon lights and trucks? You know what that means.”

A handful of guys chuckled, but believe me when I tell you that zero of these guys had any intention of focusing on anything but hockey. I’m not sure you could convince me they go out and party ever given how reserved and dialed in they were all weekend. But it was a humorous attempt to break the tension a bit and pretty soon we were arriving at the hotel, ready to crash before getting up a few hours later and starting all over.

TEAM HOTEL
We checked into the hotel around 1-ish Central. I was having a hell of a time keeping my eyes open and I didn’t burn 4,000 calories playing hockey that night, so I can’t imagine how painfully exhausted the Red Wings were. In fact, traveling with them for only 48 hours really opened my eyes to what kind of lives they lead. Sure, they have beautiful hotels and beautiful planes and meals are coordinated for them… but they literally don’t stop. We didn’t get settled in until after 1. And they had morning skate at 11.

And they have to do this 41 times a year. Minimum.

Walking into the hotel, we’re greeted by half of the staff (including the manager who welcomed my dad and me back…which is kinda awesome). Just inside the door are two tables: one that says “PLAYERS” and another for “STAFF.” All of the players have envelopes with their names on them — inside is a key to their room. Find your name, find your room, and get to bed.

Pavel Datsyuk’s envelope is left on the table when all the others had been removed. Hint #2 that he wasn’t around this weekend. But, seeing as how the local papers still had him listed in the lineup for Saturday’s game, I thought I’d take the opportunity to break my first “scoop” of the weekend.

We’re just about to head to our room on the 7th floor — the team was spread out all over — Mr. Holland stops us and says, “Breakfast at 9am?”