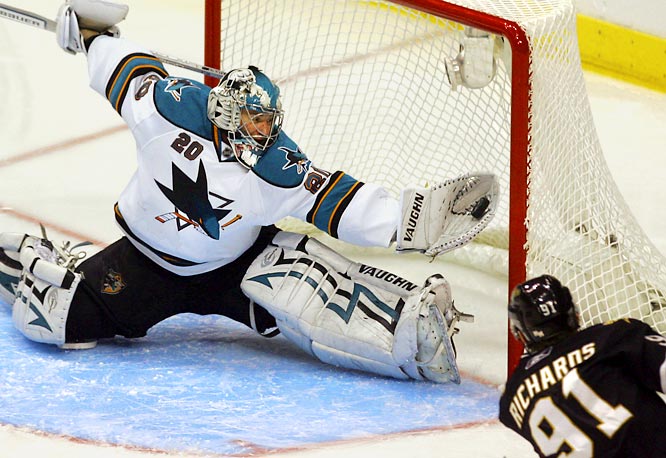 ***NOTE***
Please check our Nabokov Pledge Page to place your H2H2 bets whether he’ll pass waivers or not.

Pardon the scramble, but a tsunami just hit Twitter with news that the Detroit Red Wings are close to finalizing a deal for veteran goaltender Evgeni Nabokov. Per Bob McKenzie:

It looks like @Gordie78 may be a prophet. He said 4 hours ago Nabokov to DET and negotiatons are on and may be done soon.

And, once again, from TSN cohort Darren Dreger:

Red Wings in discussions with veteran goaltender, Evgeni Nabokov. Deal today? Will have to clear waivers if it gets done.

As Dreger points out, Nabokov will be subjected to waivers since he began the season in a European pro league. All 29 other teams would have a chance to claim him at the deal that Detroit is allegedly signing him to, much like how the Sharks claimed Kyle Wellwood and the Predators claimed Marek Svatos (both originally signed by the Blues).

You may remember Nabokov as the goaltender that was run out of San Jose after ten seasons and nearly 300 regular season wins. He signed with SKA Saint Petersburg of the KHL this past summer after finding no suitors in the NHL. The $24M contract was mutually terminated, citing “family circumstances” and Nabokov has been rumored to be returning to the NHL for a few weeks now.

Makes you wonder how banged up Jimmy Howard really is. He’s set to return to the crease this evening, and Joey MacDonald has been surprisingly efficient as Osgood’s replacement. Chris Osgood, of course, isn’t set to return until March following hernia surgery.

*UPDATE: 12:37pm*
Per RDS, the deal has been signed, although there’s no confirmation from either the Red Wings or Nabokov’s agent.

Frankly, I don’t have a problem with this deal for a few reasons: he may get claimed off of waivers, and nothing has been lost. Further, if he’s signed as a stop-gap until both Jimmy Howard and Chris Osgood are both healthy, there’s nothing stopping the team from RE-waiving him (attempting to send him down to Grand Rapids, or something).

There are currently four guys officially on long-term IR, thus removing their numbers from the cap. Holland can retroactively add two more guys, if they’re going to miss more than ten games. There’s more than enough cash in the bank for something like this, depending on the number. The team doesn’t have to worry about being cap-compliant until all the pieces are coming back from injury, which might be a few weeks. At which time, like mentioned above, he can be re-waived and continue his career elsewhere.

Also, who’s to say that he doesn’t upgrade the existing tandem even if they were both healthy? Loyalty aside, of course.

Nabokov update: Close to a deal in DET in one sense but still some issues to be sorted out. So please be clear: no agreement in place yet

Looks like something will get done — too many sources saying that it’s imminent to be ignored.

Who knows what’s going on at this point…

*UPDATE: 10:33pm*
Following the Wings game, it was made official. The club has signed Evgeni Nabokov to a one-year deal, worth a pro-rated $570,000. He will go on waivers at noon Friday.