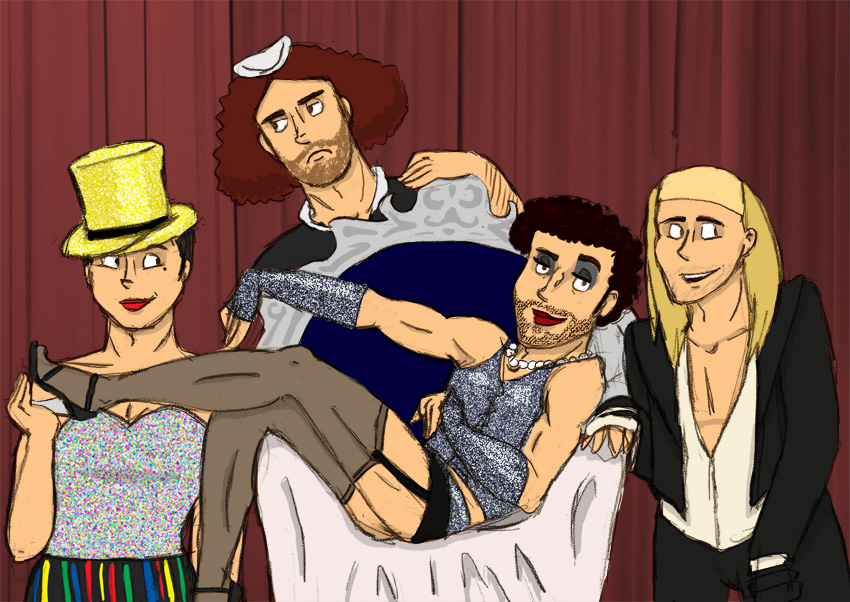 Courtesy of our good friend @stevieroxelle, I've nicknamed this The Rocky Horror PictOMG Kill It With Fire

WHAT’S ALL THIS THEN?
The Wings and Jackets play a home-and-home with Columbus, beginning Friday night at 7pm Eastern.

WHAT’S THE BIG IDEA?
Despite having just finished a long road trip, there’s been a few days off in between games and the team should be rested. That’s great news for the guys we know are banged up and hopefully they come screaming out of the gate and take all four points available against the BlowJax this weekend.

NOW WHERE WERE WE?
These two have already played a home-and-home this season, though with a day in between. The last matchup was on November 28th, and the Wings were 4-2 winners.

OH, HI AGAIN / MEMBA ME?! / BEST NAME NOMINEE
No one on either team spent time with the other, Rusty Klesla is a pretty dope hockey name.

THEIR LAST GAMES
:: Detroit lost 5-4 to Colorado on Monday.
:: Columbus lost 4-3 to Phoenix on Tuesday. 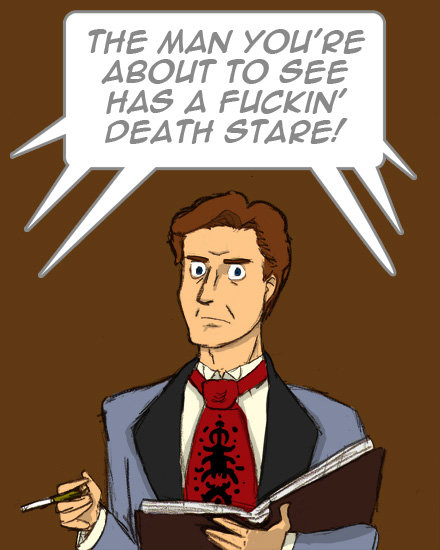 Injuries [all credit to @stevieroxelle and @bradonweb for the DOPE nickname collection]
Mike “Through the Tears in My Eyes” EModano [wrist]
Dan “A Certain Naive Charm, But No Muscle” Cleary [ankle]
Pavel “Some People Would Give Their Right Arm for the Privilege” Datsyuk [hand]
Brad “I’m Mad For You Too” Stuart [jaw]
Chris “A Hot Groin and a Tricep” Osgood [groin]

Honorable Mentions
Todd “It Was a Mercy Killing!” Bertuzzi
Todd “Society Must be Protected” Bertuzzi
Todd “Clean and Jerk” Bertuzzi
Todd “I See You’ve Met My Faithful Handyman” Bertuzzi
Todd “He Had a Pick-Up Truck and the Devil’s Eyes” Bertuzzi
Todd “I’ve Tasted Blood and I Want MORE” Bertuzzi
Jiri “Touch-a Touch-a Touch-a Touch Me, I Wanna Be Dirty” Hudler
Jiri “I’m Not Much By Light of Day, But By Night I’m One Hell of a Lover” Hudler
Jiri “The Master is Not Yet Married, Nor Do I Think He Will Ever Be” Hudler
Jiri “Do the Snatch” Hudler
Jiri “Somebody Should be Told My Libido Cannot Be Controlled” Hudler
Darren “Oh Slowly Slowly! It’s Too Nice a Job to Rush” Helm
Darren “My Veels! My God, I Can’t Move My Veels!” Helm
Nicklas “Such a Perfect Specimen of Manhood” Lidstrom
Niklas “Say Goodbye to All This and Say Hello to Oblivion” Kronwall
Tomas “He Was a Little Brought Down Because When You Knocked, He Thought You Were the Candyman” Holmstrom
Valtteri “You’re Such an Exceptional Beauty, I’m Prepared to Forgive You” Filppula
Jonathan “I’ll Tell You Once, I Won’t Tell You Twice, You Better Wise Up” Ericsson
Jakub “Suddenly… You Get a Break!” Kindl
Tomas “Don’t Dream It, Be It” Tatar
Doug “DAMMIT” Janik
Ville “They Didn’t Like Me. They NEVER Liked Me” Leino
Jason “Was the Invisible Man” Williams
Henrik & Daniel “Do You Think I Made a Mistake Splitting His Brain Between the Two of Them” Sedin
Tom “WHAT HAVE YOU DONE TO BRAD!?” Kostopoulos
Chris “He Holds the Atlas Seal of Approval” Chelios
Gary “It’s Probably Some Kind of  Hunting Lodge for Rich Weirdos” Bettman
Larry “Frank-N-Furter, It’s All Over” Murphy
Larry “Whatever Happened to Saturday Night” Murphy
Larry “Don’t Get All Hot and Flustered, Use a Bit of Mustard” Murphy
*If there are any that you think I missed, throw them in the comments — the best one will be shared for all to enjoy on the TPL Facebook Page* 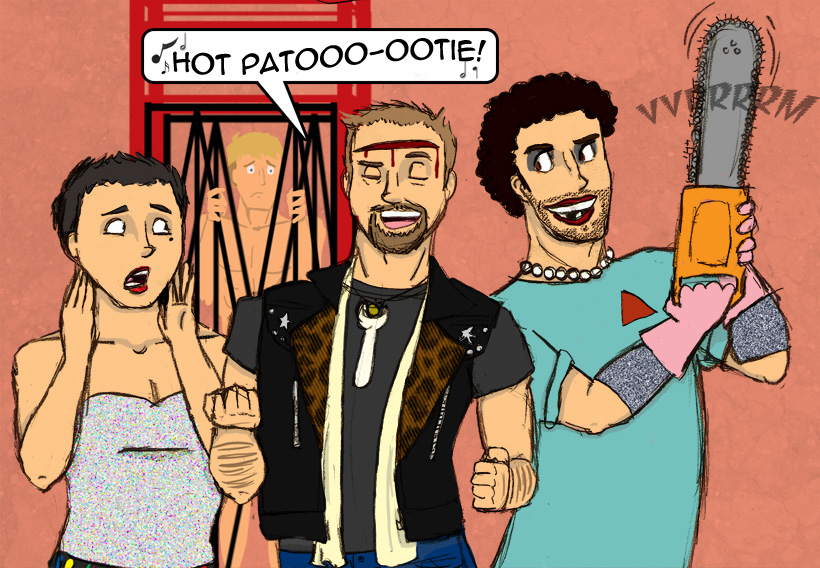 THE FIVE HOLE
1. More Jimmah: With Chris Osgood on the shelf for the next two months and fan confidence in Jimmy Howard slipping (inexplicably, considering he leads the league in wins) — these kinds of games are the ones that you’d like to see a solid effort out of your netminder. Two clashes with a division foe that has, historically, been an easier game than others. Will he be able to maintain his focus for two straight nights?
2. Kindl Emergence: Likewise, it’s a great opportunity for Kindl to take advantage of his increased playing time. If ever he’s going to slam his fist on the table and say “I’m here to stay,” this weekend against the Blue Jackets would be an excellent time.
3. ‘Sak Attak: After scoring his first career NHL goal, presumably while riding the “Tatar was sent down instead of me” high, Jan Mursak might look like he was shot out of a cannon. And not the kind on the ridiculous third jerseys of the Jackets.
4. Zetterback: He’s made no secret that his back is bothering him (again), but Henrik Zetterberg is one of the stronger Red Wing forwards in the last month — pacing a tad more than a point per game. Fatigue is going to be an issue over the next two days, but here’s hoping the few days rest does that body good.
5. Brendan Smith, All-Star: Congratulations to Grand Rapids Griffin defenseman Brendan Smith, who was named to the AHL All-Star Team. Here’s hoping he can continue that receiving kind of announcement into his NHL career…

WHAT WE LEARNED AGAINST THE AVALANCHE
Joey MacDonald — like Chris Osgood — looks “spectacular” stopping fewer than 90% of the shots he faces. 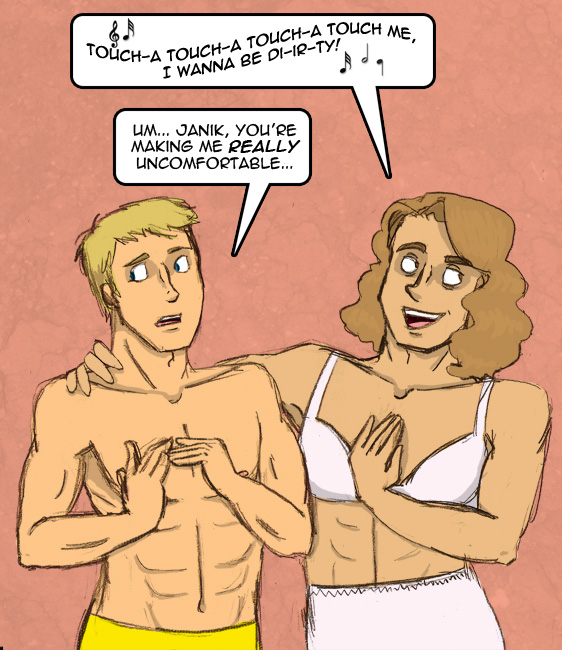