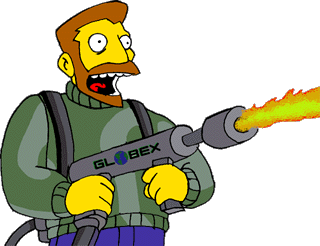 Today's theme inspired by a conversation with @sullyosis and @saraneuie following an ill-received reference on TP:60

WHAT’S ALL THIS THEN?
The Wings and Predators, 7:30pm Humpday, Joe Louis Arena.

WHAT’S THE BIG IDEA?
Detroit’s on a mini-slide, having lost two games in a row (though, one did include the charity point). They’ll be looking to get back on track playing a team that has historically played the Wings tough, but currently find themselves in last place in the division.

NOW WHERE WERE WE?
This is the second matchup between the Central Division teams: the first came on October 30th, where the Wings were 5-2 winners on a strong game between the pipes from Chris Osgood (his last before tweaking his groin) and goals from Homer, Eaves, Stuart, and a pair from Dangles.

OH, HI AGAIN
There are no former Red Wings in Nashville, but David Legwand is as close as you’ll get.

MEMBA ME?!
With Greg Johnson retired, the Wings don’t have any former Preds in their lineup, either. Shockingly, no one the roster is from Nashville — OR EVEN THE WHOLE HOCKEY-CRAZY STATE OF TENNESSEE!

BEST NAME NOMINEE
Last year, Francis BOOYAH! won this category, so we’re going to switch it up a bit. There are a lot of neat names on this roster (Marcel “Get to the Point” Goc, Cody “Sounds Like Franzen” Franson), but the winner has to come from the duo in the net: either Pekke Rinne or Anders Lindback.

THEIR LAST GAMES
:: Detroit had a rough go on Monday night, losing 5-2 to San Jose.
:: Nashville lost, in overtime, to the Thrashers on Monday, 3-2.

EXPECTED LINEUP
Kris Draper comes back in, but it is not Jiri Hudler who sits — it’s Drew Miller’s turn on the two-man rotation. Draper joins Helm and Eaves on the fourth line, and look for him to play slightly more than the 5 minutes he posted late last week. Jakub Kindl was sent to Grand Rapids on a conditioning stint after being scratched for thirteen straight (this would have been fourteen) games. He’s in the lineup tonight against the Milwaukee Admirals — oddly enough, the Predators farm team.
Zetterberg — Datsyuk — Culo
Thunderchief — Flip — Mulo
Buckets — Gator — Scuttles
Draper — Helm — Eaves

Scratches
Jakub “I Fell Off the Jungle Gym and When I Woke Up I Was in Here” Kindl
Drew “Ever See a Guy Say Goodbye to a Shoe?” Miller

Honorable Mentions
Todd “On Your Way Out, If You Want to Kill Someone, It’d Help Me a Lot” Bertuzzi
Todd “Did You Notice How People Weren’t Shoving or Knocking Each Other Down?” Bertuzzi
Jiri “Seems to Me Someone’s Gotta Case of the S’pose’das” Hudler
Chris “HOORAY! EVERYONE’S A WINNER!” Osgood
Jimmy “Nobody Ever Says France” Howard
Jonathan “So Long, Stinktown!” Ericsson
Justin “I Tackled a Loafer at Work Today” Abdelkader
Valtteri “You’re a Northern Reticulated Chipmunk Yes You Are” Filppula
Dan “I Moved Here From Canada and They Think I’m Slow, Eh” Cleary
Nicklas “The Tale of One City” Lidstrom
Henrik “For Me AND My Life Partner” Zetterberg
Niklas “We Don’t Have Bums in Our Town” Kronwall
Brad “And if We Did, They Wouldn’t Rush” Stuart
Ruslan “They’d Be Allowed to Go at Their Own Pace” Salei
Pavel “The Hammock Hut. That’s on Third” Datsyuk
Brian “Hammocks R Us. That’s on Third, Too” Rafalski
Tomas “Put-Your-Butt-There. That’s on Third” Holmstrom
Johan “Swing Low, Sweet Chariot” Franzen
Marian “Can’t a Man Walk Down the Street Without Being Offered a Job?!” Hossa
Mrs. Ryan “We Have Friends and Family and Library Cards!” Martin
*If there are any that you think I missed, throw them in the comments — the best one will be shared for all to enjoy on the TPL Facebook Page*

THE FIVE HOLE
1. Not one of Jimmy Howard’s better outings on Monday. Look for that to be rectified early.
2. It was discussed on the latest episode of TP:60 that the only defensemen that has yet to impress anyone is Niklas Kronwall. Granted, the level at which Jonathan Ericsson needs to play to “impress” is significantly lower than that of Kronwall, but the point remains. He’s the only man of the six that hasn’t made us say “hot damn” yet.
3. Jiri Hudler will remain a question mark until one of two things happens: A) he brings it, lighting the scoring fire deep inside his belly, or B) he’s benched in favor of players who are actually contributing to the team. He simply has to be running out of opportunities to prove that he’s not a one-goal scorer who is last on the team with a -7 rating.
4. Dan Cleary has gone two games without a goal. In any other year, that wouldn’t be odd.
5. Only three days remain to vote and ensure that Operation: Curly Fries is a success. Friday will be the last day that votes are tabulated before a winner is announced during The Big Chill at The Big House. Our very own Chris Hollis will be in attendance, likely giving interviews and dancing around in his underwear after it’s revealed that we’ve defeated the evil beefies.

WHAT WE LEARNED AGAINST THE SHARKS
Stop it! Stop it! Warren! Melvin! Gary! Dot! Gordie!

PREDATOR WE COVET (JJ Special)
This will come as no surprise to anyone that’s read this site for a year. I’m basically in love with Joel Ward. That guy’s awesome.