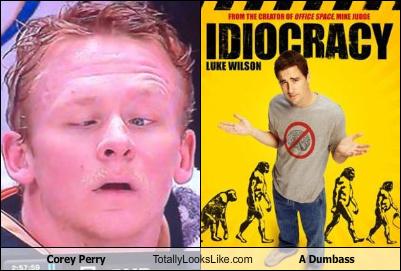 WHAT’S ALL THIS THEN?
The Red Wings kick off December with the first of back-to-back games against California-based clubs. Tonight, it’s the Los Angeles Mighty Ducks of Anaheim Angels. 10pm Eastern.

WHAT’S THE BIG IDEA?
Detroit’s on a roll, going 8-1-1 in their last ten, and show no signs of slowing down. The first meeting between these two teams (the Wings season opener on October 8th) was a barn-burner. We should all hope for a similar showing. Minus Pavel Datsyuk fighting.

NOW WHERE WERE WE?
The Wings were 4-0 winners in Game #1, with goals scored by Dan Cleary, Pavel Datsyuk, Johan Franzen, and Mike Modano. Jimmy Howard claimed the goose egg and there were fights galore.

OH, HI AGAIN
Todd Diamond Client #1 (of, presumably, 1) Andreas Lilja is a Duck. He’s averaging just over 16 minutes through 17 games, has yet to score a goal but has two assists, and is a -2 coming into tonight’s tussle.

MEMBA ME?!
The Red Wings have three former Ducks on their playing roster: Todd Bertuzzi, Drew Miller, and Ruslan Salei. In fact, Salei played under current Red Wings head coach Mike Babcock and assistant coach Paul MacLean when they were the bench bosses in Anaheim.

BEST NAME NOMINEE
You know the rules: when there isn’t an obvious winner, you turn to the Italian. Nick Bonnino edges out Kyle Palmieri for the right to be the non-cliched “Cam Fowler is a Duck ROFL” winner for this round.

THEIR LAST GAMES
:: Detroit took San Jose out behind the wood shed on Tuesday.
:: Anaheim was a 5-3 winner over Florida on Wednesday.

EXPECTED LINEUP
[After repeated requests, we are working on a Glossary of Terms to make things like the lineup easier to understand for new visitors to the site. It’ll likely be under the tabs at the top of the page, so keep your eyes peeled for that.]
Zetterberg — Datsyuk — Homer
Thunderchief — Flip — Mulo
Buckets — Gator — Scuttles
Eaves — Helm — Miller

Scratches
Jakub “Good at What? Sitting on Ass?” Kindl

Honorable Mentions
Todd “Check This Out Man, Judge Should Be Like GUILTY. Peace” Bertuzzi
Todd “Why Come You Ain’t Got a Tattoo” Bertuzzi
Jiri “Go Away! Baitin'” Hudler
Jiri “I’m Gonna Fuck All Y’All!” Hudler
Jiri “Really Don’t Think We Have Time for a Handjob” Hudler
Nicklas “OW MY BALLS” Lidstrom
Brad “My First Wife Was Tarded. Now She’s a Pilot” Stuart
Darren “The Dildozer” Helm
Chris “I’m Pretty Sure He Can Figure Out Sitting On His Ass All Day” Osgood
Pavel “No Natural Predators” Datsyuk
Dan “Full Body Latte” Cleary
Ruslan “The Thirst Mutilator” Salei
Niklas “Your Shit’s All Retarded” Kronwall
Tomas “Attempted to Jump a Jet Ski from a Lake into a Pool” Holmstrom
Marian “I Like Money” Hossa
Mikael “I Can’t Believe You Like Money, Too” Samuelsson
Brett “I’m Not Pointing Fingers, But It’s Not Going Very Well” Lebda
Andreas “Water? You Mean Like in the Toilet?” Lilja
Ville “Jack Inuh Box” Leino
Brad “Base Your Face on My Fist, Ass” May
Dallas “Two D’s For What He Describes as a Double Dose of His Pimpin'” Drake
Kyle “Fuck You, I’m Eating” Wellwood
Maria “President” Camacho
and for good measure:
The Pittsburgh “Futtbuckers” Penguins

THE FIVE HOLE
1. Joey MacDonald was sent back down to Grand Rapids and Chris Osgood returns to where he belongs: at the end of the bench charting faceoffs.
2. All jokes aside… Jimmy Howard will get a break tomorrow, as Chris Osgood is set to return. But tonight, it’s Tiberius’ crease, as he starts his 14th game in a row. He’s played very well this season but, as Saler said, is prone to getting bored and letting in a squeaker.
3. Like we touched on in the latest episode of TP:60 (before talking about which Disney princesses we’d like to get our hands on), the defense is still prone to dumbass turnovers and that’s something I’m sure the coaching staff is trying to tighten up. While the Ducks aren’t as ferocious as they have been in recent history, there’s still a lot of fire power in the forward ranks and — like the Sharks — they absolutely will convert if the Wings let their guard down.
4. Dan Cleary has been a man possessed for a few weeks, and Henrik Zetterberg had a monster game on Tuesday. Will they be the offensive catalysts moving forward — starting with tonight’s game? Both guys are more than capable of continuing their streaks.
5. Don’t forget to continue voting for #OperationCurlyFries in Fox Sport Detroit/Arby’s Vote to Restore Justice (our name).

WHAT WE LEARNED AGAINST THE SHARKS
Henrik Zetterberg is thinking curly fries… and you are, too.