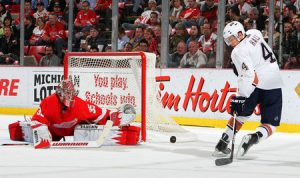 ANALYSIS FROM A FORMER HOCKEY PLAYER
The first goal was a thing of beauty — a great pass made by Jiri Hudler from behind the net to a completely unchecked Valtteri Filppula. It looked an awful lot like a power play since Scuttles was given all the time in the world to find an open man (and the men on the ice were given all the time in the world to make themselves open). Jordan Eberle took a year and a half to decide that it was his man playing keepaway with the puck and by the time he made a move, Flip dropped into the slot (behind two Oilers defensemen staring at Scuttles for some reason) and the puck was on fluttered just off the ice, onto the right blade, and into the net. That’s miscommunication and immaturity from a young hockey player and a young hockey team.

That said, I’m kind of surprised there aren’t more people talking about how goddamn good Jordan Eberle is. That kid is the real deal. He may not have looked like a standout in everyone’s eyes during this contest, but he is going to be a player. The little things he can do in the offensive zone are amazing — and I assume they’re only going to get better. I promise you in a few years, we’ll be looking at him and saying “22nd overall? Jesus Christ…” God, that Draft was good…

One thing to note about the second Wings goal is this: did you notice a difference between the Red Wings reaction on this goal (or the first, for that matter) and the goal that Taylor Hall scored in Edmonton this past weekend? While Hall — and not to say that it’s not okay — pumped his fist and got all giddy, the Red Wings went along like it was business as usual. Do you know why it looked like that? Because it was business as usual. The Red Wings offense, when it’s working and confident, is a well-oiled machine that just needs the right pieces in place to make magic happen. Tomas Holmstrom’s stick is unreal and no offense to the intermission video man of the hour (and my favorite player of all time) Dino Ciccarelli, but Homer’s the best there ever was from that spot. Two whacks at a puck before Nikolai Khabibulin can even identify where the puck is? That’s gangsta.

Edmonton’s timeout was going to be a game-decider. Either the Oilers regrouped and composed themselves… or they let the wheels continue to fall off. The first couple of shifts after that timeout were telling, and those are the kinds of decisions and moments that will either haunt Tom Renney or help prove he’s a genius. And then…

Uh oh! Another Red Wings goal. Terrible timing for the Oilers to allow a third goal. I was preparing to launch into some “this is what happens when you mess with chemistry”-esque tirade, but that line looked pretty good. When Todd Bertuzzi, who played a very solid game in that slot, is the one who is out of sync, things are okay. Mike Modano and Dan Cleary know each other already and there’s something there. I’m not sure Todd Bertuzzi fits on that line in the long-term, especially since he clicks so well with Franzen and Filppula, but he played well with the other two guys — albeit looking like the “new guy” on the line.

Bert continued to impress in the opening minutes of the second period, making a great keep-in play and an even better pass to Dan Cleary, who has NO BUSINESS scoring from there. That one’s on Khabibulin, whose head is completely fried by this point. In related news, I have Khabibulin playing in my Red Wings Blogger Fantasy Hockey League and Dan Cleary benched. Just sayin’.

Real quick — I adore that the fourth line always gets the first shift after a goal (for either team) — assuming they weren’t on the ice for it. That’s the right move. You don’t need another goal immediately, though you could certainly get one from those guys. What you need is to continue pressing the issue that “THIS IS MY HOUSE” and there aren’t better guys on the roster to remind you of that than Darren Helm, Drew Miller, Justin Abdelkader and/or Patrick Eaves. If you thought you could take a minute and compose your thoughts after a goal against, you were wrong. Enjoy this forecheck!

100 times out of 100, I’d rather have a two minute power play than a penalty shot. And weak sauce like Mike Modano’s attempt is why. When you have tools like the Red Wings offense, I’d rather chip away at the clock and potentially tally one than get one kick at the can and then go back to five-on-five. How about a hybrid system where if the penalty shot is unsuccessful, then you get the power play? Or a football-style “decline the penalty shot” kind of thing? I’m talking out of my ass, just ignore me. If only there was some way to prove my “two minutes and a goal is better than four seconds and one chance” theory…

OH WAIT. On the first Red Wings power play of the night, the Wings ate 1:48 of the second period and scored their fifth of the night. Johan Franzen got a stick on a bouncing puck at the front of the net — a puck that zero Oilers could corral for some goddamn reason — and made it his 100th career goal. At this point, the Oilers are done. You could tell in their body language that they had no interest in playing anymore.

The Wings must have seen what I saw, because they came out extremely flat and over-confident. This lead to a lazy penalty… which led to a lazy penalty kill… featuring lazy defense… allowing for a quasi-easy goal for the Oilers. The shutout was lost, but the Wings woke up a bit and realized that while Edmonton isn’t going to compete for the Cup, they’re still an NHL team that has a lot of talent.

Not hockey-related, but related to my real job: the thank you’s that the American Red Wings did to the troops (while very classy, touching, and deserved) are exactly why you’re instructed not to stare into the camera. I’m sure they were reading from a teleprompter, which is often directly in front of the lens, but it’s creepy. Next time you watch the news or see another type of interview, notice how they look just off of the camera (i.e. to it’s left or right). That’s because it’s a scientific fact that someone staring through a camera and into your soul scares the living shit out of people. Particularly when they’re reading because they’re generally wider-eyed than usual to make sure they don’t skip a word or grammar prompt.