The third line killed it on Wednesday night. Dan Cleary played like Herm’s house guest during Carnival (I AM ON FIRE! AND STILL I DANCE!), Mike Modano was tired of that monkey peeing on his back, and you know who isn’t going anywhere? 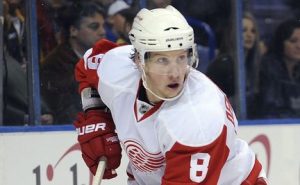 Justin Abdelkader is a madman. Like his first game, he was all over the place making things happen, making the smart plays. Keeping it simple. Take dirty filthy shots, and sometimes you get dirty filthy goals. Like the game winner.

You’d think Jiri Hudler was going to have a hard time getting back into the lineup with all four lines clicking like they have been, but Mike Babcock has said that Scuttles will make his triumphant return to the lineup on Friday. But who sits?

Bear with me for a second, but I think it might be Mike Modano — under the guise of rest for back-to-back nights. His confidence is likely the highest its been since the first night of the season, thanks to his big goal last night — and I’m sure his age is in the back of the coaching staff’s minds. Perhaps he takes a seat on Friday to be fresh for the Canucks on Saturday.

The extra day will give Uncle Mike another opportunity to see which bottom six should sit — a list that’s sure to include Hudler since the team has played some of its best hockey without him in the game. Like Saler said, I think the fourth line is fair game for a benching, too. Not that they deserve it… but neither does Hudler, to be honest. We have 13 valuable forwards but can only play 12 of them. That’s what you call “a good problem.”

I know it was just a one-goal victory, but that was the best, most dominant game that the Wings have played so far this season. That victory was NEVER in doubt — even when behind 1-0. We’ve learned not to be so comfortable with two and three goal leads, but for some reason a win was telegraphed from the opening faceoff. Incredible effort all around.

Jimmy Howard is good. Did you guys know that?

Even Riggy Shitbox, who I’m happy to make fun of, played well. He did the simple things that young, borderline NHL defensemen have to do to keep his brain in the game, like a totally simple poke-check to break up a rush that three weeks ago ABSOLUTELY would have left him flat-footed. I’m not convinced he’s a long-term Red Wing, but he played a nice game and didn’t look any worse for wear after missing a few weeks. Good on him for rebounding and shutting me up.

Can’t say enough positive things about the Red Wings last night, so we’ll have to move on to the refereeing. What in the hell was that about? Most of them were ABSOLUTELY calls that had to be made — including the Johan Franzen boarding call. I know the popular thing to do was cry on Twitter, while screaming bloody murder that Giordano turned away from Franzen….but so what? Mulo is still responsible for his body and trajectory and speed and contact. You’re not set on a train track when you’re skating — you can adapt (and you have to) to changes in the game and make sure you don’t do something completely reckless and dangerous — which is exactly what Franzen didn’t do. That’s an automatic call at any level of hockey, from mites on up. Put the pitchfork down.

But what was weird was that high sticking call that wasn’t, then it was, then it was on someone else. Admirable that the stripes wanted to get it right (and they did, eventually), but they took two hours to do it, and sucked the life out of the building, out of the potential penalty killers, out of the high-octane offense of the Wings. If you’re going to call it, call it. Don’t pussyfoot around, wait until Cleary’s sitting back on the bench bleeding to say “hey, there must have been an infraction there.”

11 thoughts on “Enjoy the Lounge, Scuttles!”